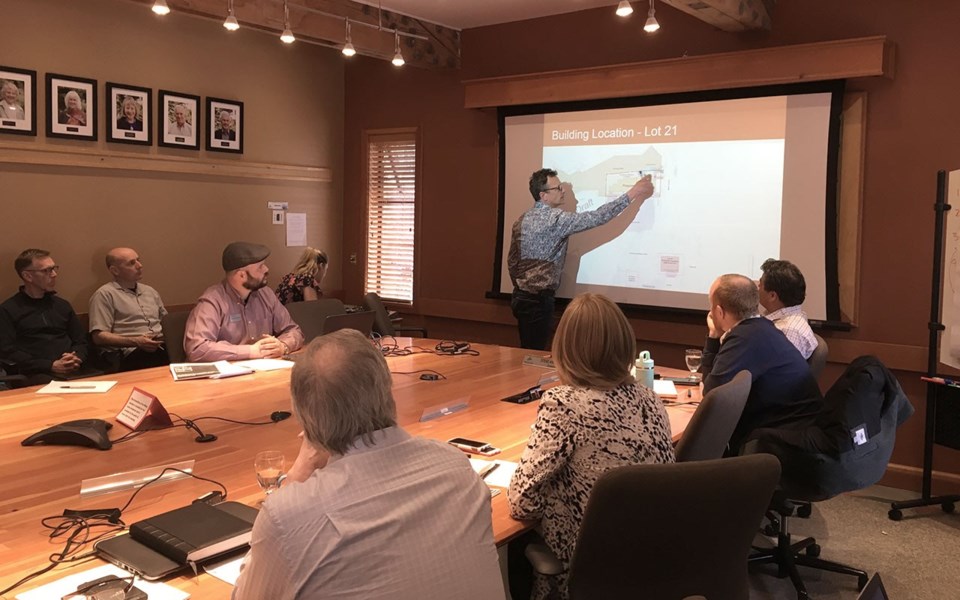 MAKING HISTORY The Whistler Museum and Archives presented to the Committee of the Whole on April 24 about the need for a new building. Photo by Braden Dupuis.

One of the most valuable artifacts owned by the Whistler Museum and Archives—a canoe belonging to Whistler pioneer Myrtle Philip—isn't even on display for lack of space.

"We obtained this a few years ago, but it's too large to fit in the existing museum building ... it's in the ceiling of the library, where it's pretty much forgotten about," said board president John Hetherington, at the April 24 Committee of the Whole meeting.

"We have a lot of artifacts that we can't use, and we'd like to change the exhibit, but there's no point changing it too much right now. There isn't enough room."

Representatives from the museum were on hand to present to mayor, council and staff about the need for a new museum building.

The museum has been in its current location—a temporary facility consisting of four joined trailers tucked behind the Whistler Public Library—since 2009, Hetherington said.

The discussion around a new building has been ongoing since late 2013, when the board started looking at potential locations.

Now, the board is eyeing Lot 21, a plot of land in Florence Petersen Park next to the Whistler Public Library, for the museum's new home.

"We think it will work. There is some challenges to it, but if we can overcome those challenges it would be an excellent location," Hetherington said.

The Museum is starting to run into serious space constraints in its current location, said executive director Brad Nichols.

"Our archival storage is about 98-per-cent full. We have very little space left in our archival room. We're growing about (two metres)of archival records per year," Nichols said.

"I like the location of Lot 21," she said. "I am concerned about the intrusion into the park. Mind you, if they did go to Lot 21, and intruded into the park, the portables would get moved, and that would be an addition to the park, so that might work out."

The proposal has gone to staff for further review, and a report will be brought to council for consideration at a future meeting.

Cost estimates for the build (projected five years into the future) have capital costs in the $7 million range. The Museum board is planning to launch a fundraising campaign once it has confirmation of the lot.

"My personal view is that the municipality ought to contribute to some of the capital costs, but what percentage, we'd have to take that under advisement," Wilhelm-Morden said.

With Whistler's original pioneers getting older, there's a certain sense of urgency to the project, Hetherington said.

"We've had a few of these people say to some of us that they would like to put something in a will or leave a donation to Whistler. If we don't act on this fairly soon their ideas are going to change."