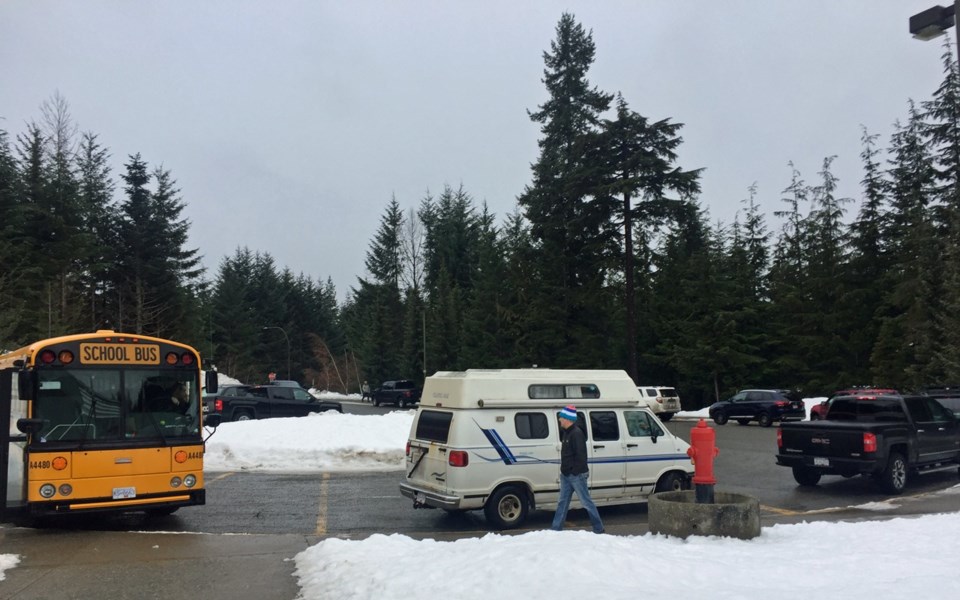 Parents at Myrtle Philip Community School (MPCS) are working to make pick-up and drop-off safer for their children following a tragic accident in Toronto earlier this year.

On Jan. 15, a five-year-old Toronto student died after being pinned between two vehicles when a driverless rolling SUV struck her at school pick-up.

"We've known that we've had issues for awhile now, and it certainly isn't something that's gone unnoticed or unspoken about, but (the death of the Toronto student) really was the catalyst for us," explained Shauna Hardy Mishaw, co-chair of Myrtle Philip's Parent Advisory Council (PAC).

"Concerned parents and staff at the school really rallied together recognizing that we had similar issues in our drop-off zones, which resulted in that unfortunate accident."

With a parking lot constructed for far fewer students than the approximately 330 that currently attend the school, and a single 84-seat school bus that's regularly at capacity, the volume of vehicles and lack of space during morning and afternoon rushes have been creating safety concerns for the school community.

"We can't have people parking on the sidewalks and kids walking between the cars," Hardy Mishaw said. "That's just an accident waiting to happen."

In response to these concerns, the PAC, and MPCS Principal Jeff Maynard, decided to form a Traffic Safety Advisory Committee last month.

In January, a survey issued to parents generated 131 responses to find that 83 per cent are concerned about the traffic, and safety at pick up and drop off, and that cars are the predominant mode of transportation to and from school (with over 60 per cent of families travelling to school four to five days a week and 50 per cent picking up from school four to five days per week).

To that end, the school's Traffic Safety Advisory Committee has already implemented several measures, in cooperation with the school district, in an effort to improve safety.

Some of those measures have included new signage, pylons in no parking zones, safety vests for teachers on duty during drop-off and pick-up times, asking staff to park at the farther end of the lot — thus allowing easier access to the school from the front lot — and a concerted effort from the school community to follow the road rules.

Those measures have already proved successful, Maynard said. "Creating that sense of conversation in the public in itself has made a difference in terms of traffic safety."

While issues have not been "100-per-cent resolved, we've definitely seen a lot of improvement," agreed Hardy Mishaw. "At the end of the day it's all about the safety of the children. We need to not only work with the parents to change behaviour, but we also need to work with the school district to address the fact that schools are increasing in capacity."

The committee's recommendations moving forward include working with the school board and MPCS administration to reduce the number of cars coming to and from the school.

"We also recommend reviewing current procedures around parking and scheduled pick-up procedures to better manage traffic flow and reduce parking congestion during the peak times," she added in a follow-up message.

Those procedures might find themselves weaved into the conversation on Wednesday, March 7, when School District No. 48 is set to host a community information session as part of its Long Term Facilities Plan for the Whistler Area. The session is scheduled for 7 p.m. at Whistler Secondary School.