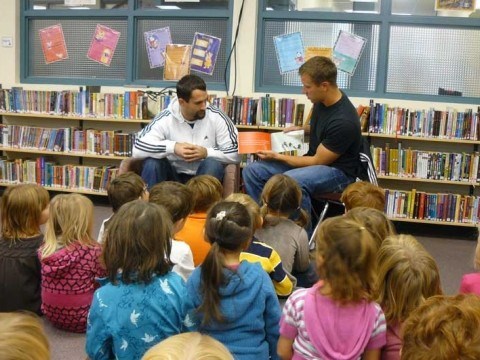 They may be in Whistler for the intense bobsleigh team selection races but that didn't stop some national team members reading to local kids this week.

What makes these book readings extra special, of course, is that Adam Anderson, Hugh Baker, Chris Ripley and Bobby Staniforth are the main characters in "Bobsleigh Jellybeans" - a new children's book about friendship, teamwork and determination to follow your dreams.

Penned by local couple Paul and Talya Shore, "Bobsleigh Jellybeans" was inspired after they opened their home to the team members last year to billet them during the 2008 selection races in Whistler.

"Other teams have been billeted but no other families wrote books about them!" said Staniforth, who along with Ripley read their story to kids at Spring Creek Elementary Tuesday.

The book tells the tale of four boys who grow up to become members of a national bobsleigh team. Along the way they meet a little Whistler girl called Jashia, named after the Shore's first child, and inspire her to follow her dreams too.

The kids from Ms. Titus's Kindergarten/Grade 1 split and Mrs. Friend's Kindergarten classes were captivated by the story of the four bobsledders.

Several kids told the team members that they had seen bobsleds racing down the track at the Whistler Sliding Centre.

"I'm going to the Olympics and I have my bell," four-year-old Elsie Wall assured the athletes.

Though the two World Cup bobsleigh teams have already been picked for the 2010 Games, the Bobsleigh Jellybeans team have Olympic dreams too.

"Our team is hoping to try and qualify a third sled for the Games," said Staniforth.

Only three nations will be allowed to send a third sled to the Games.

In the meantime the development team will be in Whistler until Oct. 25 hurtling down the fastest track in the world and then off to compete in a hectic season on the North American competition circuit.

Bobsleigh Jellybeans was self-published by the Shores with bobsledder Chris Ripley doing the illustrations.

The team will be at Armchair Books on Monday, Oct. 19 from 4 to 6 where they will be signing copies. The books are $12 and after covering costs, all the proceeds will go to the team.

To learn more go to bobsleighjellybeans.com.