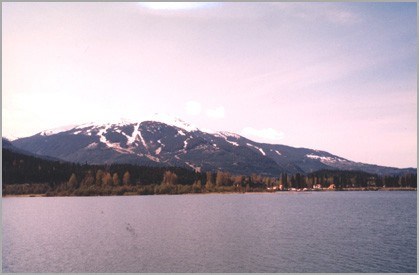 Eighty-odd years before anyone dreamed of skiing on Whistler, the lakes were what attracted the first tourists to the valley. Soon after the railway reached Alta Lake in 1914, Rainbow Lodge became a destination for sport fishermen and others who came to relax and soak up the beauty of what was then a remote mountain lake.

Lakes are indeed special – not only because of the unique habitat they provide but also in the way they were formed. Unlike the valleys they occupy, the depressions filled by lakes were not eroded by the rivers and streams that run in and out of their closed basins. Lakes are, in fact, places in a river system where erosion stops and sediment, settling out of the calm water, accumulates. A lake may form where a river is dammed by landslides or lava flows. A few may result from tectonic subsidence or volcanic eruptions but most of our mountain lakes owe their origin to glaciers. And in the grand sweep of geological time lakes are transient features, destined to either fill with sediment or drain as the outlet streams erode away the barriers that contain them.

About 10,000 years ago, during the waning stages of the last regional glaciation, the first Whistler lakes formed where tributary glaciers melted back, allowing water to pond against the main valley glacier. One of those marginal lakes occupied Fitzsimmons Creek valley for many years. Although it later disappeared, along with the valley glacier that held it in place, the lake deposits of fine silt and clay still form the terraces along Fitzsimmons Creek valley.

Later, when the main valley glacier itself began to disintegrate, a large chunk of ice, isolated from the main body of the retreating glacier, was partly buried by outwash gravel and silt from meltwater streams. When the ice-chunk melted it left a circular depression in the outwash deposits. This filled with water and became the "kettle" now known as Lost Lake.

During the long period of regional glaciation, when ice filled the valleys almost to the top of Whistler Mountain, the southerly-flowing glacier gouged out a depression in relatively soft bedrock along the west side of the valley. This glacially-scoured rock basin now contains the water of Green Lake. Farther south, on the crest of the divide between Green and Cheakamus Rivers, the retreating glaciers left behind a complex, hummocky ground-moraine containing numerous large and small closed depressions. Three of these filled with water to become Alta, Nita and Alpha lakes.

Today the fish are smaller and fewer than in 1914 and certainly the lakes can no longer be described as "remote". But they are still a source of summer recreation for both visitors and locals and, for now at least, they still harbor secret corners where ducks and mergansers can raise their broods, and trumpeter swans can rest on their yearly migration. I hope we can keep it that way.

Bird Walk — Meet at the base of Lorimer Road on Saturday, March 4 th to view and learn about local birds. Start time is 8 a.m. For more information contact Michael Thompson at 604-932-0541.

Thursday, March 16, 7 p.m. at Millennium Place (Admission by donation) How close are grizzly bears to the Whistler valley? What's the grizzly bear recovery project all about? Tony Hamilton has worked with the Ministry of Environment since 1982, to study coastal grizzly and black bears and their response to logging. Tony will talk about the known and unknown aspects of local grizzly bear ecology and objectives, targets and strategies of the recovery program.