The autumn migration did not disappoint. Sightings in September and October tallied 111 species and not too shabby volumes, but November's quirky weather added nothing more.
Feb 14, 2020 8:00 PM By: Karl Ricker 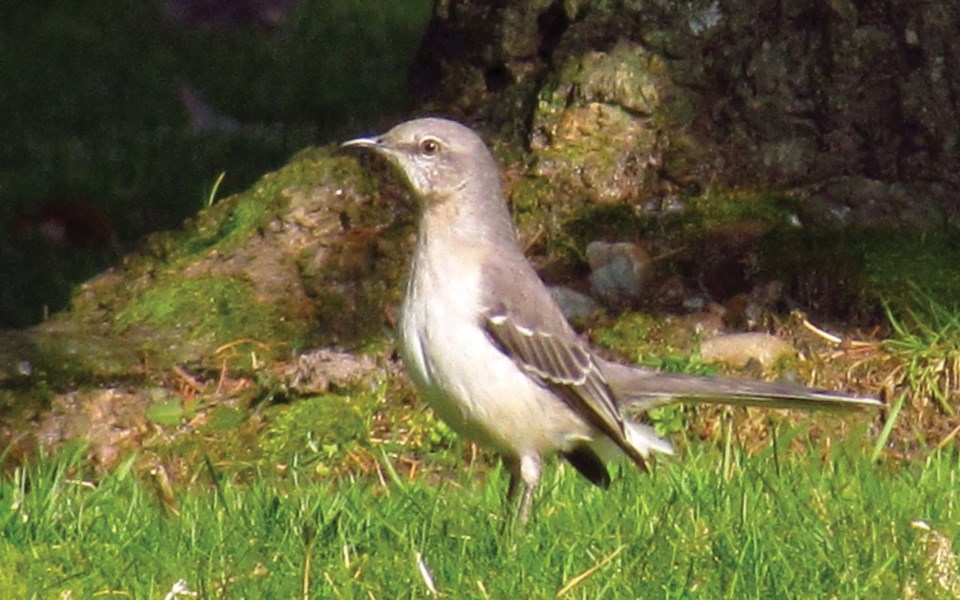 RARE AFFAIR Northern Mockingbird was found for the first time ever in Whistler last fall. Photo by Chris Dale

The autumn migration did not disappoint. Sightings in September and October tallied 111 species and not too shabby volumes, but November's quirky weather added nothing more. In October, Shawn Mason registered the surprise of the year with a new one for our list—a northern mockingbird in her yard at Creekside on two successive days. The identity was confirmed by photo.

While this is the first record of the bird in Whistler it has been seen twice before at Squamish, once at Pemberton, several times in the Vancouver-Sechelt Coast areas, and very rarely on Vancouver Island. Its normal range is throughout southern U.S. and eastern North America but seen least often in the Pacific Northwest. So, kudos to Shawn, our new Christmas Bird Count Coordinator.

Otherwise, the autumn highlights are the successful rearing and departure of our osprey from their nest near Meadow Park Sports Centre in mid-September. Heather Baines found greater white-fronted geese in the reeds at the mouth of the River of Golden Dreams. Four of the five species of grebes were finally seen, after a hiatus of all but the pied-billed in the other seasons.

There was also a first autumn record of a turkey vulture, Sabine's gull and red-necked phalarope. Otherwise gulls and shorebirds were hard to come by and we saw only one red-tailed hawk. An injured saw-whet owl was duly rescued and taken to the rehab facility near Vancouver. Several hops up the lift system finally gave us a Clark's nutcracker, the important bird for dispersal of whitebark pine seeds.

Alpine sightings of other species were sparse except for bold ravens and ubiquitous juncos. Eight species of warblers was about normal as were ten species of sparrows. We missed on orioles, and three species of finches was underwhelming. Where were the house finches? All told however 111 species exceeded the 14-year average of 104 species (range 90 to 114). Did we miss any regulars? Yes, no fox sparrows or Barrow's golden-eye ducks!

Thanks to the autumn bonanza 177 species were seen over the birding year, which concluded on Nov. 30. This is above the 15-year average of 172 (range 148 to 188) and certainly a rebound from the previous few years of decreasing species numbers. Thus, the diversity remains in good shape, but numerical counts of nearly all species are light, the only exception being the hundreds of American wigeon ducks seen this autumn.

If you'd like to get to know local birds better, all are welcome to join our monthly bird walk on the first Saturday of each month.

We meet at the bottom of Lorimer Road across from the Catholic Church (6299 Lorimer Rd) and walk to Rainbow Park and back, covering a variety of ecosystems. Another great resource for birding is the free Merlin Bird ID app from the Cornell Lab of Ornithology.

Naturespeak is prepared by the Whistler Naturalists. To learn more about Whistler's natural world, go to Whistlernaturalists.ca.