Naturespeak: Factoids from 15 years of Fungus Among Us

This weekend, the Whistler Naturalists celebrate 15 great years of Fungus Among Us. Over that time, hundreds of locals have participated in mushroom walks, talks, displays, and cooking shows.
Oct 11, 2017 6:00 PM By: Bob Brett 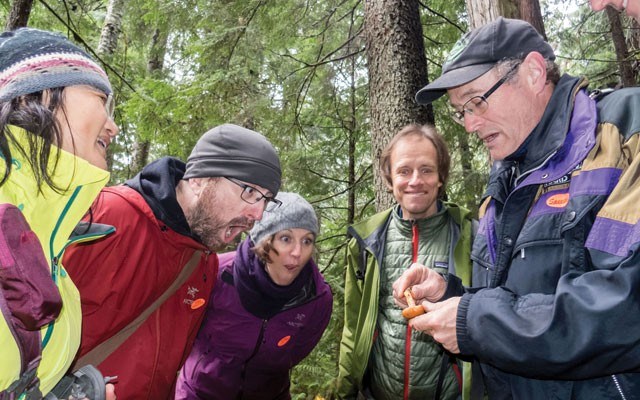 Fun guys and gals Fungus Among Us is celebrating 15 years. Photo submitted by Bob Brett

This weekend, the Whistler Naturalists celebrate 15 great years of Fungus Among Us. Over that time, hundreds of locals have participated in mushroom walks, talks, displays, and cooking shows. We're delighted this year to welcome back 20 of our favourite fungus gurus to lead the event. Here are some factoids we've learned from them over 15 years.

Some things happen each fall, like falling leaves and rising rents. Mushrooms aren't so predictable. During our second year, for example, we found 132 different species of mushrooms of which only 31 were repeats from the first year.

This variability has repeated itself since. Some years, the woods are bursting with almost every sort of mushrooms. Others are dominated by Tricholomas (including pine mushrooms), or cobweb-veiled Cortinarius species, or by boletes such as slippery jack. Chanterelles might be plentiful one year and rare as hens' teeth the next. Plentiful or scarce, there's always something interesting to find.

Mushrooms are people, too...

Or at least closer than they are to plants. Back in the 1700s, Linnaeus classified all life into only two kingdoms: animals and plants. This worldview persisted until 1969 when fungi were finally recognized in their own kingdom. While scientists still debate how many kingdoms there are, fungi have kept their place as a separate kingdom more closely related to animals than plants.

That makes sense since only plants can transform the sun's energy into food through photosynthesis. Like us, fungi have to get their energy either from a plant or something that's eaten a plant.

What are they doing in our woods?

Most local mushrooms are attached to tree roots. Like other plants, trees produce sugars through photosynthesis, some of which are passed along to the fungi. In return, the fungi deliver water and nutrients back to the tree. Most mushrooms in our woods need trees and most of our trees need mushrooms.

How trees talk to each other

It's recently been shown that fungal filaments (mycorrhizae) can provide a conduit that links two or more trees. Suzanne Simard at UBC has a popular TED.com talk ("How trees talk to each other") that provides a fascinating insight into these linkages. She has even found that a tree is more likely to pass nutrition to trees related to it (which she calls mother and daughter trees, respectively).

Will it kill me?

This is the second most common question at our public walks, just after "is it edible?" As Andy MacKinnon happily points out, there are actually more poisonous plants than poisonous mushrooms. While touching a poisonous mushroom won't kill you, it's still prudent to know for sure what mushroom you've found before considering it for dinner, and that's where our gurus can help.

Fungus Among Us this weekend: