with halloween just around the corner and mushroom season in full swing, it's the perfect time to talk about one of nature's weirder fungus displays.
Oct 19, 2019 12:00 AM By: Mallory Lakins 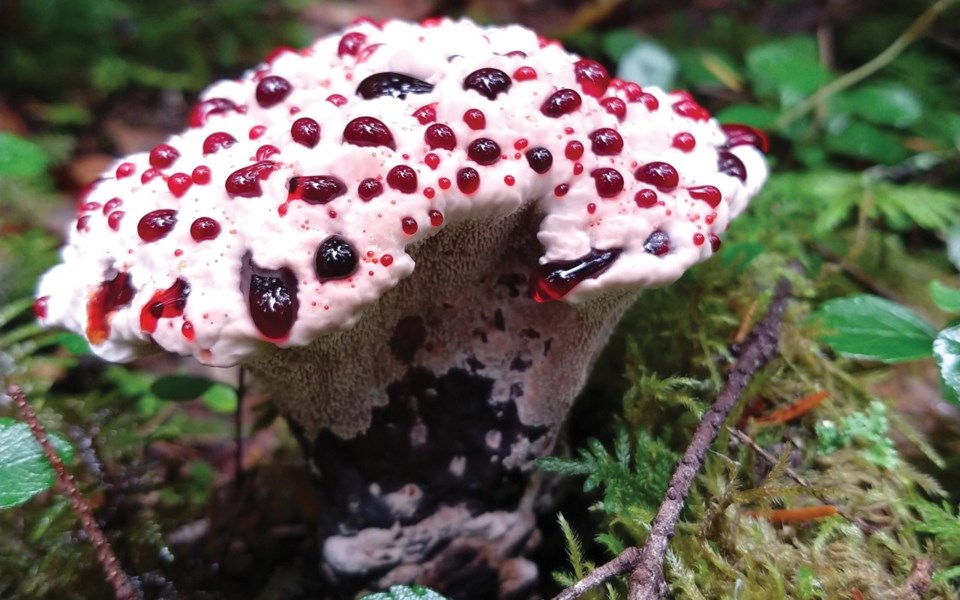 long in the tooth What really sets the 'bloody tooth fungus' apart from other mushrooms are the moist young fruit bodies that 'bleed' red liquid droplets to cover their exterior. Photo by Melanie Tardif

with halloween just around the corner and mushroom season in full swing, it's the perfect time to talk about one of nature's weirder fungus displays.

The mountainous, conifer-rich forests of the Pacific Northwest are a hotspot for Hydnellum peckii, a bizarre mushroom known colloquially as "bloody tooth fungus," "devil's tooth," or more innocuously "strawberries-and-cream." The shape of these odd-looking mushrooms is highly variable as they are amorphous—meaning they lack a clearly defined form and can grow around other objects such as fallen branches as they develop. Individual bloody tooth mushrooms can also merge, forming a fused knobby mass called a confluence that looks like a human molar. On the underside of the mushroom are short vertical spines, and the pinkish cap of the young mushroom is covered in tiny hairs with a texture like velvet. As the mushroom ages it becomes tough and fibrous, loses the velvet coating, and turns an unremarkable brown or black.

What really sets these mushrooms apart, however, are the moist young fruit bodies that "bleed" red liquid droplets to cover their exterior. This phenomenon is called guttation—the secretion of droplets of water from the pores of an organism. Although the mechanism for guttation in fungi is not yet well understood, it is analogous to the process seen in many vascular plants. When the soil surrounding the fungi is very wet, water is forced into the mushroom by osmosis. This creates pressure inside the mushroom, eventually forcing liquid through the surface pores of the cap and underside, carrying with it a deep red colour from a pigment present in the flesh.

These mushrooms are not poisonous, but even if the somewhat pleasant hickory nut-like odour tempts a tasting, the flavour is reported to be hot, bitter, peppery, and unpleasant enough that they are considered inedible. Although unappetising, these mushrooms perform useful services for the surrounding ecosystem including making nutrients more available to their host trees, and pulling heavy metals out of the soil. In particular, these mushrooms play an important role in retention and cycling of caesium-137 (a radioactive isotope of caesium) in organic rich soil.

The bloody tooth fungus is also undergoing trials to determine its efficacy for certain medicinal treatments. The blood-like "sap" is anti-bacterial, and has also been shown to have anti-coagulant properties, meaning it slows down the body's process of making clots to stop bleeding. The sap also contains a substance called thelephoric acid which may be beneficial in the treatment of Alzheimer's disease.

Learn all about our local wild mushrooms at the 2019 Fungus Among Us Mushroom Festival on October 18 and 19. The tickets for the main events are sold out, but the Mushroom Display, on Saturday from 2:30 to 4 p.m. at Myrtle Philip Community School, is by donation and all are welcome to attend!

Naturespeak is prepared by the Whistler Naturalists. To learn more about Whistler's natural world, go to whistlernaturalists.ca.