Naturespeak: In the den of the bear

When I arrived on the West Coast, one of the animals I was most excited (and nervous!) to encounter was a bear. Although I have now been fortunate to come across many black bears and even a few grizzlies, they still fill me with awe.
Apr 14, 2019 2:00 AM By: Mallory Lakins 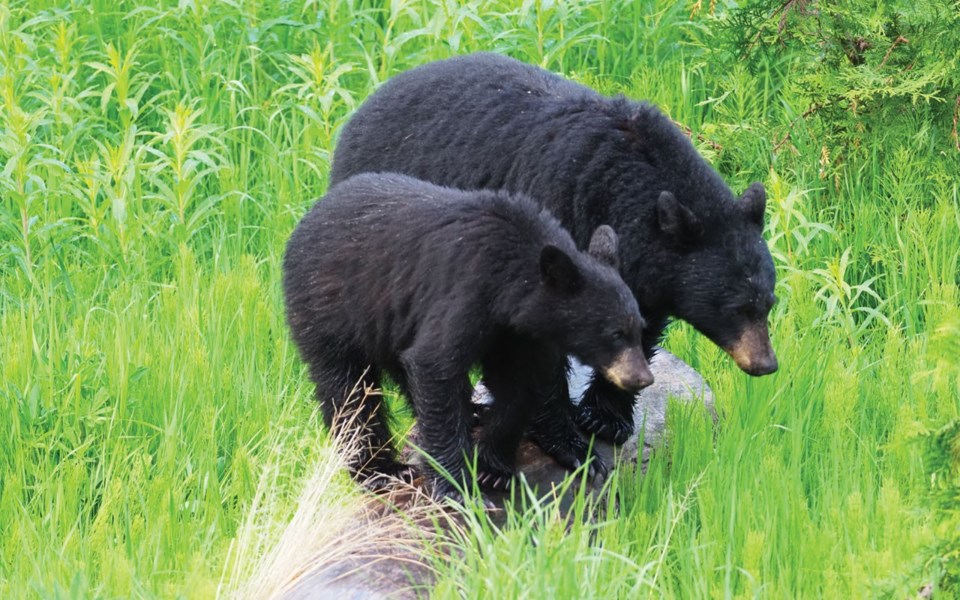 GIVE SPACE Bears habituate quickly to humans, so be sure to keep your distance. Joel Lycklama

When I arrived on the West Coast, one of the animals I was most excited (and nervous!) to encounter was a bear. Although I have now been fortunate to come across many black bears and even a few grizzlies, they still fill me with awe.

As the tender shoots of skunk cabbage appear in the spring, bears are becoming more active. Male bears emerge first in March or April while females with cubs wait until April or May. Adult bears consume up to 20,000 calories a day in the hyperphagic (excessive eating) period before hibernation, but can burn an estimated 4,000 calories of fat a day while hibernating, shedding 20 to 40 per cent of body mass over winter but retaining muscle. They thus emerge thin but strong, and for a few weeks may appear wobbly as they adjust from cramped quarters to open spaces.

During winter dormancy, heart, breathing, and metabolic processes slow. Mammals like bats and marmots enter a true hibernation in which they aren't woken by loud noise, or even touch. Body temperatures can drop below freezing, and heart rates reduce by up to 95 per cent. In this phase, the animals regularly wake and move every few days or weeks—eating small amounts, passing waste, and increasing body temperature to near normal before returning to hibernation.

Mammals such as bears and chipmunks, however, hibernate differently, entering a state known as

torpor. During torpor, heart rate, breathing, and body temperatures still decrease; a chipmunk's hard-working heart, for instance, can slow from 350 beats per minute (bpm) in warmer months to as little as four bpm. While bears don't eat, drink, or pass waste in torpor, they can wake quickly if hurt or threatened.

Pregnant bears present a unique case. If a female conceives during the May to July frisky season, the embryo has a brief period of development before pausing until late autumn. At this point, if mom doesn't have enough stored fat, the embryo aborts; if she's plump enough, the embryo implants and resumes development. Cubs are born in January or February, blind, deaf, and, at 1.8 to 2.7 kg, smaller than adult hoary marmots. Mothers nurse infants with high-fat milk and thriftily keep the den clean while gaining precious nutrients by consuming the waste produced by their cubs.

Dens are made in hollow trees, hillsides, rock cavities, or any other space (including basements) large enough for a bear to squeeze into. These nooks are lined with bedding material such as leaves until they're "just right" to keep the animals warm. Dens are generally built in three to seven days, and while proactive bears will build months before hibernating season, others prepare last minute (much like humans!).

Whistler's resident bear expert Michael Allen tracked 35 adult black bears in 2018, the lowest number in 25 years of monitoring. Only 10 years ago, this number was almost 80.

One reason for the decline is that Whistler has become a hot spot for bear conflict, so it's always worth refreshing yourself on bear safety. Ensure bears never have access to food or garbage—a fed bear is a dead bear. Clean up food waste outdoors, scrub barbecues after use, and hang food away from sleeping areas while camping.

Give bears as much space as possible, as they habituate quickly to humans. On the trail, carry bear spray and make noise so you don't surprise them. Keep dogs on leash. If you do encounter a bear, don't run. Stay calm and back away slowly. If we all stay bear aware, we'll be able to enjoy these beautiful animals for many years to come.

Naturespeak is prepared by the Whistler Naturalists. To learn more about Whistler's natural world go to Whistlernaturalists.ca.