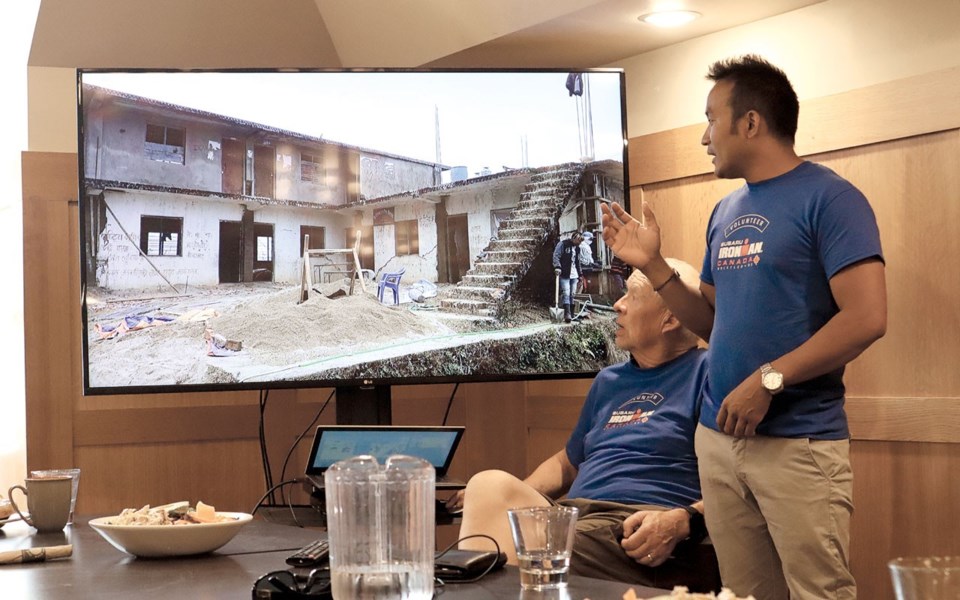 As a trekking guide in Nepal, Kalu Tamang is used to hiking through the largest mountains on the planet.

So how do Whistler's peaks compare to the Himalayas?

"Smaller, but very beautiful," he said with a smile.

While visiting Canada last month, Tamang took some time out of his three-week vacation to meet with Whistlerites during the Rotary Club of Whistler's morning meeting on Tuesday, July 24, as well as the Rotary Club of Whistler Millennium's Thursday meeting on July 26, to share stories about what, exactly, trekking through the small, South Asian country entails. The guide also shared all-important information like where you'd stay, what you'd eat, and what kind of level of fitness you'd need to make it (as it turns out, there's a trek for every level).

Tamang's connection with Whistler lies with locals and rotary members Ken and Annette Martin. The couple joined him for a two-week trek in the Langtang Valley and Gosainkund Lakes in March 2012 with Nepal Azimuth Treks, the company Tamang founded after beginning his career as a porter.

In addition to organizing and guiding custom expeditions through the Annapurna, Everest, Langtang and Mustang regions, Tamang's company kept specializes in "Home Stay" treks, which lead visitors through small, more-remote villages of Nepal.

During Thursday's meeting, Tamang captivated the attention of the approximately 20 rotary members and guests clustered around a conference table at the Pan Pacific Mountainside, with facts, stories and breathtaking photos of what life looks like amongst the world's tallest peaks. It is a life that has faced severe challenges in the last three years after a major earthquake struck Nepal on April 25, 2015 killing nearly 9,000 people and injuring 22,000. It also ravaged structures and villages throughout the country, leaving approximately 3.5 million people homeless. The flow of tourists into the country—an industry crucial to Nepal's economy—was also shattered following the disaster.

"Especially after the earthquake, we had a really, pretty difficult ... life," Tamang explained. "It was really hard, because there were many people that were killed by the disaster and earthquake—families lost—and this was pretty hard for us."

In the meantime, friends and clients from around the world—"like Ken and Annette," noted Tamang—sent money to help Tamang and his community through the immediate aftermath.

"For a short time period, we bought some plastic tents and some mattresses; we bought some rice and some kind of food, because we were afraid to go inside. All the stores were closed; it was very difficult," he recalled.

As rebuilding efforts began, some friends of Tamang's from Malayasia reached out to him, expressing their desire to return to Nepal to help reconstruct and outfit schools.

That prompted Tamang to establish his own non-profit organization, Hands on Nepal, to help ensure his friends' donations would make a difference. The organization officially launched six months ago, Tamang said.

Explained Annette: "He's been working at restoring some schools and latrines throughout Nepal on top of his regular business that he's still doing—his guiding."

Tamang, his organization and his friends have also donated blankets, jackets, stationary and school supplies to local students, in addition to building materials and labour.

"I really appreciate it and really enjoy doing these things. I'm very happy that my friends are supporting me to do this," Tamang said.

In order to get the organization off the ground, added Annette, Tamang "had to go through all of the paperwork and he managed to get the (organization) together, so now he's able to get the money from Malaysia to Nepal to do the work."

"When you give your money directly to someone you know, your money works."

Following Tamang's speech, a discussion broke out amongst members about what it might look like to partner with a Nepalese rotary club on a international project in the near future; travelling to the country to contribute to the potential development project—in addition to a trek, of course.