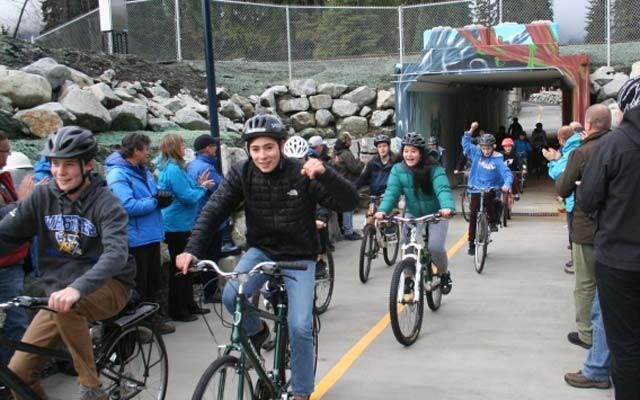 VITAL CONNECTION Whistler Secondary School students ride the newly opened section of the Valley Trail, an underpass located under the CN Rail line north of the village. Photo courtesy of the Resort Municipality of Whistler

One of the last major sections of Whistler's Valley Trail network was officially opened to the public last week.

On Nov. 15, local officials and developers cut the ribbon on the Nesters Crossing Valley Trail Underpass, located north of the village, welcoming students from Whistler Secondary School, who were the first to ride the section of paved trail on their bikes.

"This is quite a feat of engineering," said Nesters Crossing developer Steve Bayly in a release. "We're glad to see this important link completed. The underpass, as opposed to an overpass, was a far better option for the initial costs and the long-term maintenance costs. Most importantly, it's a much better experience for the users."

The Resort Municipality of Whistler (RMOW) called it "one of the last significant connections" of Whistler's trail system, adding new sections to the Valley Trail both north and south of the underpass. Located under the CN Rail line at Nesters Crossing, the connection officially links the north end of the town to the rest of the community, offering a direct route from Rainbow to the village and beyond.

The trail and underpass will be illuminated at night and cleared of snow in the winter, the RMOW said.

"The Valley Trail is one of our most popular tourism and community amenities. It is wonderful to see this section of trail now complete," said Mayor Nancy Wilhelm-Morden.

The RMOW dedicated $504,500 in provincial Resort Municipality Initiative funding to the project.

"The Province is pleased to support the Nesters Crossing Underpass through the Resort Municipality Initiative," said B.C. Minister of Jobs, Tourism and Skills Training Shirley Bond. "It provides a valuable connection between Whistler's parks and the village and will be used by locals and visitors alike. It is a great example of how we can work together to diversify the tourism experiences available in Whistler and the region."