Nesters Waste Depot to get facelift 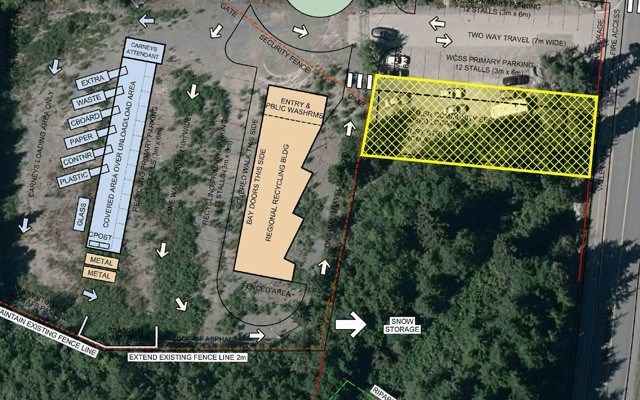 WasteLIft The site plan for the proposed reconfiguration of the Nesters Waste Depot. Image courtesy of the RMOW

A much-maligned piece of local infrastructure is getting a new lease on life thanks to a reimagining of the Nesters Waste Depot Site.

"That roof structure (over the recycling bins), when it was constructed years ago was very controversial, because it cost quite a bit of money," recalled Mayor Nancy Wilhelm-Morden.

"And it was over top of the containers. Well, the containers don't need a roof structure, the people using them do," she said with a laugh.

"So yeah, there was a lot of grumbling about that roof."

During a discussion about the new Nesters Waste Depot site at the March 15 council meeting, Wilhelm-Morden asked staff if there were plans for the structure.

"They talked to the people over at the public works yard next door and there's a bunch of equipment that's been sitting out in the weather all these years, and it would be great to have a roof over some of that equipment," Wilhelm-Morden said. "So it's going to be recycled."

Fitting, as one of the goals of the reconfiguration of the Nesters site — which includes the soon-to-be-relocated Re-Use-It Centre — is reducing waste.

"I think we will see a significant increase of goods going to the Re-Use-It Centre at Nesters than we're currently seeing," the mayor said.

The rework will also enhance traffic flow through the site and add more parking.

The project got its start a few years back, when the RMOW bought the Fortis Gas site neighbouring the Nesters depot. At the time, there was no specific use in mind for the land, but when new requirements came into play around recycling the pieces started to fall in place.

When the Whistler Community Services Society (WCSS) caught wind of the changes, they approached the mayor about including them in the plans.

"It all made sense to me," Wilhelm-Morden said, adding that having services like the food bank closer to the village will be much more convenient for users.

"So staff and the executive of the WCSS have been working on the MOU and preliminary designs and so on for the last year and half."

The RMOW has budgeted $1.2 million for the project in 2016, and the work will take place from May to August.