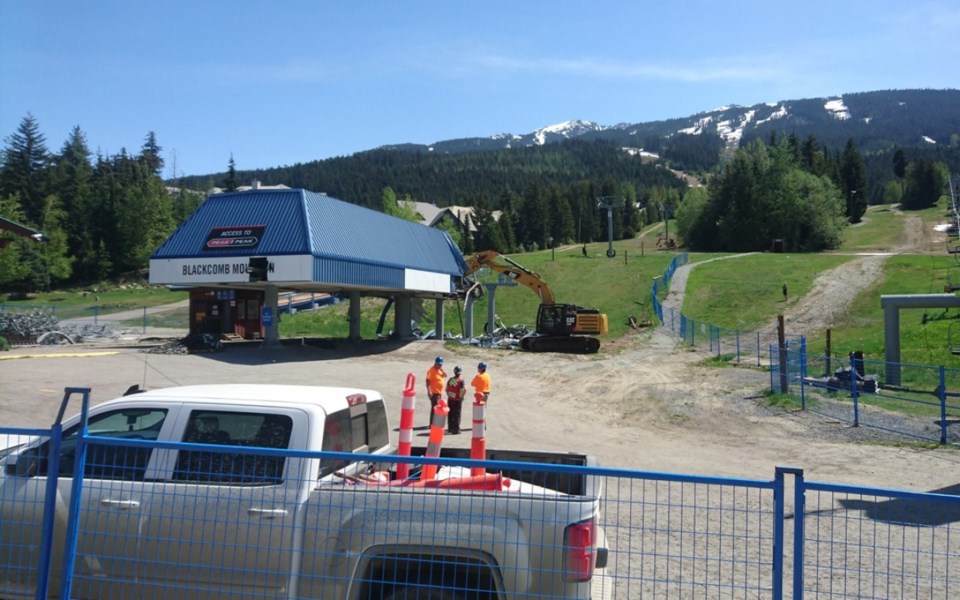 UNDER CONSTRUCTION The demolition of the Wizard Chair this May. Whistler Blackcomb has invested $66 million in lift upgrades ahead of this winter season. Photo by Patrick Boxall

The new Blackcomb Gondola, the centrepiece of Whistler Blackcomb's (WB) $66-million lift upgrades, won't be operational in time for the Nov. 22 Opening Day.

Chief Operating Officer Pete Sonntag confirmed on Tuesday, Nov. 13 that a number of factors have led to the delays. The company is targeting Dec. 14 for the opening of the 10-person gondola.

"This is a large and complex project and unforeseen delays have challenged us and made it difficult to meet our deadline," he wrote. "On behalf of Doppelmayr, I would like to apologize to the guests of Whistler Blackcomb for any inconvenience they will experience from this delay. We will do everything we can to complete the Blackcomb Gondola on or before the new target date and know that the new gondola will provide the enhanced experience and positive impact everyone has been looking forward to."

Blackcomb will be accessed via the Peak 2 Peak and Excalibur until the new gondola is up and running.

Weather has also hampered efforts somewhat, and Sonntag explained that it's still too early to definitively say what terrain will be open to skiers and riders by Nov. 22.

"We've been capitalizing on every opportunity to make snow. The team has done a great job of having us ready when temperatures cooperate," he noted. "We know we have some weather coming in this week and we really just need to see what the freezing level is going to be, which will determine if it's helpful or not. And then we do see a significant (weather) pattern change coming right around American Thanksgiving, so hopefully that will at least get us up and running from that point forward."

According to Vail Resorts' most recent financial reporting, through Sept. 23, the Colorado-based company saw season pass sales increase by 25 per cent in units and 15 per cent in sales dollars compared to the same period last year.

Sonntag said that trend has continued heading into the ski season, particularly for the Epic Pass, which offers unlimited skiing at Vail Resorts' roster of resorts. It's currently priced at US$949. An unlimited season's pass for WB, which also includes several on-mountain perks, is priced at CAD$1,409.

"People, I think, are figuring out the Epic Pass and the value that that brings beyond just being able to ski unlimited at Whistler Blackcomb. In a year when (weather) might be off in any one region, there's always somewhere else to go where the snow is going to be good."

Epic and season's pass sales will be cut off for the winter on Sunday, Nov. 18. The Spirit Pass, sold at a reduced rate in conjunction with the Whistler Chamber of Commerce for local employees, will be available for purchase year-round. In May, WB announced that the Spirit Pass would drop in price from last year to more closely align it with the cost of an Epic Pass. It is currently priced at $1,124 for adults, $659 for teens, and $759 for seniors.

WB will also be offering a new edition to its suite of passes for the 2018-19 season: a two-day Edge Card. The unrestricted version will sell for $229, while the restricted card, with certain blackout periods, will go for $199.

"We've taken a lot of feedback over the course of last season from some folks who felt that the five-day card didn't deliver the kind of affordability they wanted," explained WB's director of communications Marc Riddell to Pique in August when the news was announced.

Vail Resorts garnered criticism last season when it eliminated several popular WB pass products, including the one- and three-day Edge cards, as well as the parent pass. Following a wave of outcry, the company announced that parent passholders from the year prior would be grandfathered in for future seasons until the pass is ultimately phased out.

The ski-industry giant has signed a long-term wind energy contract with Lincoln Clean Energy to purchase the equivalent amount of electricity needed to power 100 per cent of the company's estimated North American operations by 2020. Under the 12-year deal, Vail Resorts will purchase 310,000 megawatt hours annually, equal to the amount of electricity needed to power 30,000 average American homes each year.

On Tuesday, Vail Resorts also announced a partnership with Eco-Products to supply all of its North American restaurants with compostable and recycled items, eliminating conventional single-use plastics, a process that will begin this winter.

"I think we have this collective will to do the right thing, knowing the great outdoors is the business that we work in, so it's truly our obligation to do right by the outdoors and take care of what we enjoy each and every day and make sure that it's around for future generations," Sonntag said.

The executive added that WB, where efforts have been made to reduce single-use plastics and energy use, was a major driver of this week's announcements. Since 2000, the ski resort has reduced the amount of waste sent to landfill annually by 71 per cent and energy consumption by 14 gigawatt hours.

"What makes me most proud about this announcement is that this entire effort was generated through the great work that was done at Whistler Blackcomb prior to Vail Resorts' acquisition," Sonntag said. "Our company's leadership saw something that was working really, really well and realized that this is exactly what we should be doing across the entire company."

Vail Resorts is targeting 2030 to achieve zero net emissions and zero waste to landfill across all 17 of its resorts, part of its "Commitment to Zero" sustainability goal, first announced last year.