New campaign emphasizes mental-health changes are ‘Part of Our Nature’ 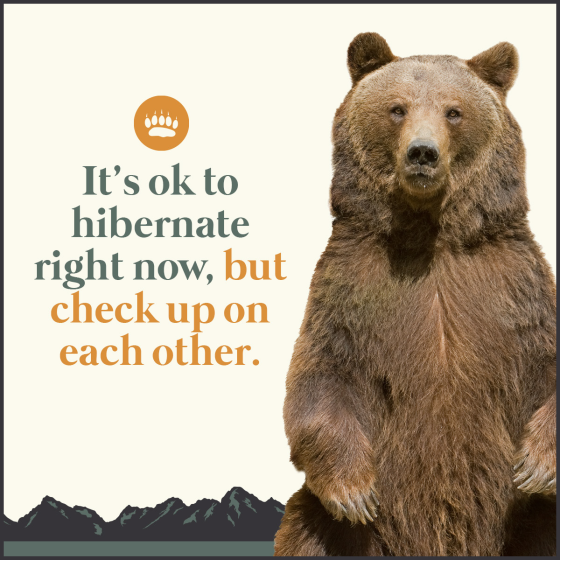 A promotional ad that is part of a new mental-health awareness campaign launched by the Katz Amsterdam and Whistler Blackcomb foundations. IMAGE SUBMITTED

A new campaign and website from the Katz Amsterdam and Whistler Blackcomb foundations seeks to remove the stigma around mental-health challenges and knock down barriers to accessing needed support and services.

Recognizing the rise in demand for mental and social support during the COVID-19 pandemic, the two foundations teamed up to launch the month-long media campaign, entitled Part of Our Nature, as well as a website that will connect residents in four mountain communities where Vail Resorts operates—Whistler (and the Sea to Sky); Summit County, Utah; Summit County, Colo.; and Tahoe-Truckee, Calif.

“Our whole campaign is Part of Our Nature, basically saying that changes in our mental health are part of our nature,” explained Mei Madden, executive director of the Whistler Blackcomb Foundation (WBF). “When we came up with it, we wanted to appeal to a very wide demographic group.”

The online, radio and print campaign utilizes images of mountain wildlife to convey its messaging. For instance, in one ad, a bear is pictured with the caption: “It’s OK to hibernate right now, but check up on each other.” Another features a blue bird, with the accompanying text: “It’s always a bluebird day for me, but that doesn’t mean every day is sunny.”

“The use of an animal is powerful, it’s personal, it’s kind of non-threatening. It’s got a bit of levity and humour to it and it translates across all age groups,” Madden noted.

The website, partofournature.org/whistler, will also link to a wide range of available services in the corridor, divided into separate categories, such as mental health outreach support, food and shelter services, support for those fleeing domestic violence, and broader government wellness resources.

“We’re keeping an eye on it so if there are better links that come out, [we’ll add them],” Madden explained. “We’re just basically doing the work for them so it’s a one-stop shop and it’s fairly easy and accessible.”

Locally, the Whistler Community Services Society (WCSS) has seen an explosion in demand across multiple services it offers in recent month. Outreach workers have made 875 connections with community members since the pandemic hit in mid-March, with a troubling increase in the number of people in crisis.

In February, pre-COVID-19, just 15 per cent of WCSS clients accessing services were “in crisis.” That number rose to 42 per cent in March, and 57 per cent in April. Numbers have yet to be compiled for May and June.

In that time, the WCSS-operated Whistler Food Bank has handed out 3,000 emergency food bags—just three shy of the entire total for 2019.

“I would say it’s the unknowns that people are having trouble dealing with. The uncertainty, and the quick changes of things,” interim WCSS executive director Lori Pyne told Pique in an interview last week.

Both prior to and during the pandemic, the WBF and Katz Amsterdam Foundation—founded by Vail Resorts CEO Rob Katz and his wife, bestselling author Elana Amsterdam—have stepped up in significant ways to help fund local social-service providers. Madden estimated the WBF has granted about $200,000 to organizations across the Sea to Sky since the pandemic began, while the Katz Amsterdam Foundation provided US$2.5 million in immediate COVID-19 support to both Vail Resorts’ employees and the mountain communities where it operates—including CAD$100,000 in March to WCSS and $100,000 to WBF’s COVID-19 relief fund.

Madden said the WBF has also approached several Sea to Sky non-profits during the pandemic to identify gaps in service and funnel funds in the appropriate direction.

“What I’ve heard is that this has been started a few other times, but at the end, when there’s an outcome or something that needs to be done in the corridor, there’s no funding,” she added. “There are so many different organizations, and it’ not that people have been working in siloes, but depending on what we’re focusing on, it’s nice to try and get the overall big picture.”