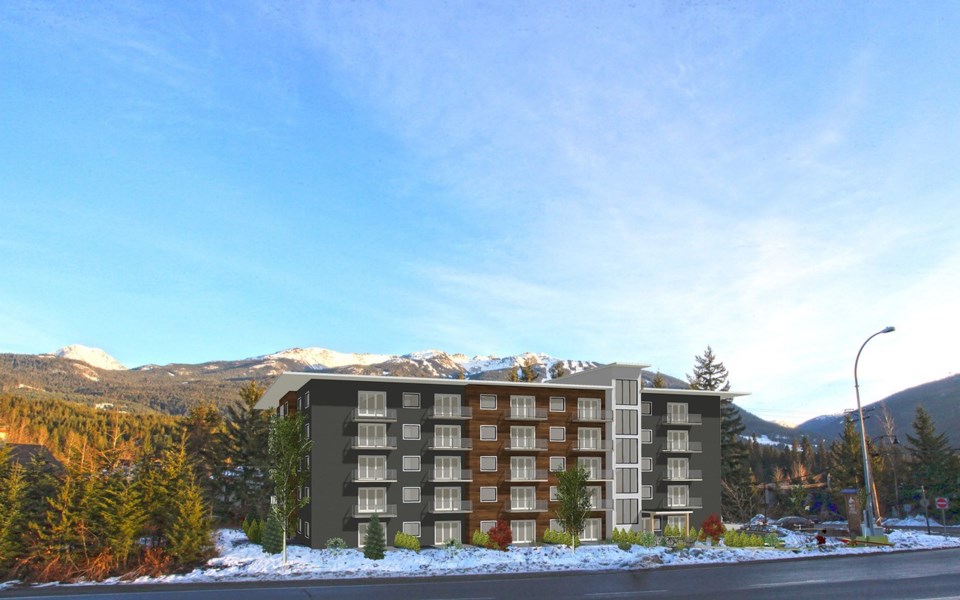 IN THE ZONE A rezoning application submitted Jan. 9 proposes to build a 65-unit employee-housing building at the entrance to White Gold. This early-stage rendering is 'close' to accurate in scale. Image courtesy of Innovation Building Group/Vidorra Developments

A recommendation out of the Mayor's Task Force on Resident Housing appears to be having the intended effect.

Two employee-housing proposals have now been tabled by private developers following council's endorsement of guidelines for such projects on Dec. 5. — and there may be more to come.

"There has been weekly calls to the planning department about exploring opportunities," said Mayor Nancy Wilhelm-Morden.

Of the two being processed, the first is the contentious, 74-unit project in Nordic headed by local developer Robert Velenosi, originally presented to council on Dec. 20.

The second comes from Innovation Building Group/Vidorra Developments, which submitted a rezoning application for a 65-unit, five-storey employee rental housing building at the corner of Nancy Greene Drive and Highway 99 in White Gold on Jan. 9.

The project has been under consideration for a couple of years, but it was the new guidelines that made the difference, said Rod Nadeau, a Whistler builder since the late '70s and managing partner of Innovation Building Group.

"I wasn't really going to do it until I read through their policy, and it fits with what we're doing," Nadeau said, adding that his team modified the plan of its recently completed building in Pemberton and put the project together over the course of a few weeks.

The proposed rates are in line with current Whistler Housing Authority (WHA) pricing, and range from $998.50 for a one-bedroom apartment to $2,015.60 for a three bedroom.

Rent increases would be tied to the annual provincial allowance, which is usually close to the rate of inflation, Nadeau said.

The developers will turn a profit, mostly due to the fact that they have several projects underway or completed in resort communities across B.C. (in Pemberton, Revelstoke, Tofino and Golden).

"We will make money on it, but it's totally different — you don't make much, but you make it every month," Nadeau said.

"So this isn't worth doing if you own one building, but our goal in 10 years is to have 1,000 units, and we understand resort towns, and the problems associated with building, and the complexities and the demographics."

While the project will use WHA guidelines to find applicable tenants, it's unclear what role the WHA waitlist will play at this time.

"We haven't sorted that out. The problem in this town is there is going to be a fight to get them, and how do we as professionals be fair to everybody?" Nadeau said.

But the developers will most likely end up working with the WHA, he added.

"They have a long waitlist, they have people who have been on it for a long time," Nadeau said. "We can fulfill that need, but there are other things to consider."

Either way, the focus will be on renting to individuals rather than directly to businesses.

"The whole notion of employers controlling accommodation for their employees, I've been dead set against that from the first time it was suggested 20 to 30 years ago," Nadeau said. "We don't need to go back to the coal mine days."

The building will be constructed to a net-zero energy standard and include rooftop solar panels and two electric cars available exclusively for residents through a car-share program.

With only 39 parking stalls proposed for the development, the goal is to target some Whistler workers who don't own a car, Nadeau said, adding that there are a couple of WHA buildings that have a similar ratio of parking stalls.

"By putting it there, people can walk to Nesters, and the bus stop is just around the corner," he said.

If all goes smoothly, construction will likely begin in 2019 with a move-in date the following year.

Meanwhile, a group of Nordic residents is galvanizing its opposition to Velenosi's proposal to build staff housing in the neighbourhood.

On Saturday, Jan. 20, 17 members from the Aspen Ridge Strata voted to launch a committee aimed at formalizing its case against a rezoning application for the 74-unit employee housing development on Garibaldi Way. The group has also secured a $5,000 contingency fund, part of which will be used to retain a municipal lawyer who could shed light on the ins and outs of the development approval process.

The proposal has drawn the ire of area homeowners who fear the potential repercussions of adding 222 bed units and 122 underground parking stalls to the sleepy cul-de-sac and neighbourhood.

"This is not a case of being against building employee housing," said one resident at the strata meeting. "We have concerns about the development and the way it's proposed now, going from six to 222 beds on a one-hectare site."

With the application in its early stages, the proposed project's full impact will be assessed over the coming months, according to the Resort Municipality of Whistler (RMOW). The RMOW is also planning a public information meeting on the proposal, with date and location still to be confirmed.

The rezoning application will also be subject to a public hearing before being considered by council.