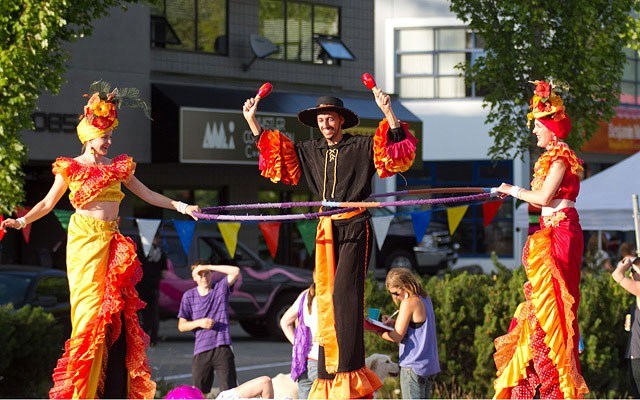 PARTY DOWN The Whistler Centre for Sustainability wants you to get to know your neighbours better through a series of block parties held across the community. The Whistler Arts Council's Function Junction Block Party is pictured above in 2012. File photo by Adam Taber

Party with a purpose.

That's the idea behind a new initiative launched by the Whistler Centre for Sustainability (WCS) that aims to foster deeper community connections through fun and social gatherings to be held in neighbourhoods across Whistler.

"We introduced Neighbourhoods Work (Block Parties) as an opportunity to do two things: One was creating better social connections in neighbourhoods so (residents) can have a better quality of life and be able to organize a little bit better around their neighbourhoods, and the other was around connecting community organizations to help them," explained Dan Wilson, sustainability planner for WCS.

Wilson came up with the block party concept after hearing discussions from residents on social media about how other neighbourhood improvement projects could be factored into the water main replacement in Alpine Meadows this summer.

"At the time a lot of people were suggesting potential synergies with that particular project, but part of the challenge was that those ideas for synergies came as the project was going as opposed to a year in advance," said Wilson.

Communities across the globe have wrestled with ways to better link people to their neighbours in an era where much of our social interactions occur online. In Vancouver, a city that has long been labelled as unfriendly, City Council launched a task force last year dedicated to fighting loneliness and increasing civic engagement.

The problem may not be as pronounced in Whistler, but given the transient nature of the community, strengthening neighbourhood ties can still prove challenging, Wilson said.

"I think it relates to people connecting so much at their workplace or on social media — they're finding their tribes through those avenues and have less social time," he said. "I think that's a bit exacerbated in Whistler just because there are so many part-time residents who maybe just come up for the weekend or different times of year."

The block parties, which can be held at a variety of locations such as private homes, businesses or public parks, are also envisioned as a way for Whistlerites to engage with community groups at the grassroots level. Wilson hopes organizations such as the Resort Municipality of Whistler, the Association of Whistler Area Residents for the Environment and the local fire department will set up booths to spark conversation on a range of topics important to the community.

Now the WCS is looking for five lead volunteers to organize the events, which are slated to take place between late August and October. Successful candidates should have experience in organizing events, a good network of local connections and enough free time to take on the role.

The events could feature local music, food, games, crafts and activities, although the final program will ultimately be up to organizers. Up to $500 will be available for organizing each of the five parties. Volunteers will also be guided through the planning process thanks to a comprehensive toolkit that will be provided by the WCS.