New land swap with First Nations in the works

Residential development will go on the Alpine North site and adjacent RMOW lan
Aug 29, 2008 9:28 AM By: Claire Piech 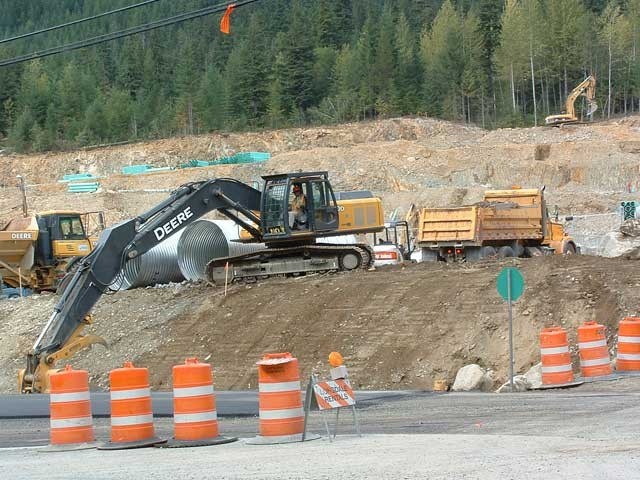 Mechanized Mascots Heavy machinery, ubiquitous in the Sea to Sky corridor, prepare the land for future developments. Squamish and Lil'wat Nations are planning a neighbourhood above Rainbow.

The Squamish and Lil’wat Nations’ plans for a neighbourhood development above Rainbow got a thumbs up from Whistler Council Monday night.

The First Nations want to put their 458 bed units on their Alpine North property and an adjacent slice of land owned by the Resort Municipality of Whistler.

The reason for this new plan is that a large portion of the Alpine North land is either too steep to build on or has old-growth forest, explained Guy Patterson, planner for the municipality. This makes it difficult to fit all the bed units on the site and so the First Nations now plan to put some of the homes on two-hectares of land offered by the municipality.

Patterson added that the First Nations’ latest plan comes after the RMOW made it clear it was not comfortable with residential housing on the former highways works yard opposite Alta Vista, known as the BCBC lands, as the Squamish and Lil’wat Nations had proposed.

While the municipality is offering the Squamish and Lil’wat a piece of land next to Alpine North, Bill Barratt, chief administrator for the municipality, said Tuesday that “another land transfer from the First Nations to the RMOW is in the works and is still being negotiated.” He was not able to specify what piece of land would be part of the trade.

However, it is well known that the municipality has been eyeing the BCBC lands for some time.

Earlier this summer the First Nations submitted an application to rezone their properties at Function Junction, Alpine North and the BCBC lands. However, at an open house for the rezoning application in mid-July the BCBC lands were not included.

Municipal staff and council said they were reluctant to move the BCBC part of the application forward.

The proposed zoning for Alpine North would permit 48 detached houses and duplexes, as well 42 townhouse units. The First Nations will also preserve an area of mature forest on the upper portion of the Alpine North as parkland.

“I think the solution to trade off a portion of that site is a very elegant solution that accomplishes a number of things,” said McKeever.

“It preserves a portion of the forest, it nails all the bed units onto the site we intended them to be nailed to and it puts a versatile property in our pocket for future use.”

“The RMOW have really worked hard and we certainly appreciate their effort,” said Lundie.

“I think it is a win-win situation for everyone. There is nothing controversial here.”

Yet Councillor Tim Wake said he was concerned with the number of ways the residential development will move away from the Whistler 2020 vision, including the large size of the homes and their distance from the town centre.

“I guess I am going to hold my nose and go with this because we have to do it, but it is really unfortunate that we are going in a 180 degree direction on where we should be going,” said Wake.

“I don’t think we need one more single family lot anywhere in Whistler, and we continue to pull them out of the hat, and we mitigate it by saying we are building townhomes, but these townhomes are huge and will need a car.”

Despite his concerns, Wake said he would vote for the proposal because he understands that the municipality has to do this as part of its partnership with the First Nations.

Municipal staff believes the First Nations’ residential development will be able to use the Rainbow highway intersection, currently under construction, as well as public road leading into Rainbow. Traffic reports confirming these assumptions will be needed before the final bylaws are adopted, said Patterson.

The First Nations Legacy Land Agreement with the province covers eight parcels of land, totalling 300 acres. The land is part of the agreement to host part of the 2010 Olympics on Squamish and Lil’wat territory. Revenue from developing these lands is expected to offset the cost to run the Squamish-Lil’wat Cultural Centre in Whistler.

A public hearing on the Alpine North development will likely be held in September.