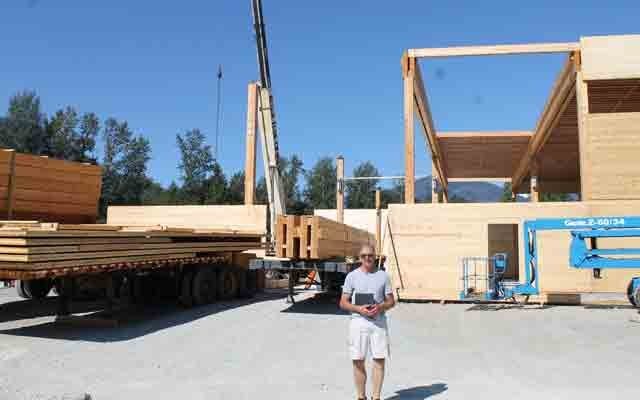 A plant grows in sunlight Mateo Dürfeld stands in front of the new BC Passive House plant being contructed at the Pemberton Industrial Park. Photo by Cathryn Atkinson

A honey-coloured wooden warehouse taking shape alongside the Sea to Sky Highway in Pemberton's industrial park is part of a Green home revolution in Canada.

In it, the company BC Passive House — run by CEO Matheo Dürfeld, the man who built the Austria PassivHaus in Whistler during the 2010 Winter Olympics — will use the ecofriendly technology to construct prefabricated homes.

The $2.5 million plant is Dürfeld's commitment to move his operation to Pemberton from Williams Lake in order to expand capacity and have greater access to Lower Mainland housing market. The plant will also be used to build their more conventional wood homes, as diversification was essential, he said.

His company has built five passive houses at Williams Lake and the new plant declares a desire to expand further. The sixth house will eventually be built at the new plant, which Dürfeld said would be ready in early 2014.

"Our focus will be to build prefabricated passive houses out of Canadian wood-based products. You can do a passive house out of many materials, you aren't told how to do it. The technology just tells you what you have to achieve," Dürfeld said.

Passive house technology is set around achieving the lowest energy consumption possible, no more than 15KW per sq. metre per year for heating and cooling, and 120KW for the entire operation. This is just 10 to 15 per cent of what an ordinary house uses, Dürfeld said.

He explained that local climate data, location, shading and other impacting elements are taken into account for passive houses, with adjustments made to achieve the desired energy-consumption level.

And how much do these homes cost? Dürfeld said a house recently completed in the Rainbow neighbourhood, in Whistler, the first registered passive house in Canada, cost about $300 per square foot.

"Cost is different from project to project. On conventional build of a passive house in Europe, they will say it costs five to 10 per cent more. We might be a little bit more here in Canada, maybe 10 to 15 per cent, because certain things aren't as readily available here," Dürfeld said.

Coming into construction "as a university job," Dürfeld went on to specialize in building log homes "because it was trendy" and began his work as a general contractor in Whistler in the late 1970s.

"As housing changed in Whistler, so did our focus, but it has always been to work with wood," he said. "The PassivHaus in Whistler is how we came at the new technology. The Austria passiv group formed to build Austria House and the whole idea was to showcase what it was, not only to North America but also to the Austrians to beam back to Europe 24/7 for the Olympics."

Dürfeld was convinced. He began to send his workers on courses to learn the technology. "We were already beginning to get interested in energy efficiency and the passive house model just takes it to a new level," he said.

The company will be at the first-ever passive house conference in Canada, which takes place in Vancouver in September.