Operators must pass online exam, register their drones
Jun 7, 2019 5:30 AM By: Braden Dupuis 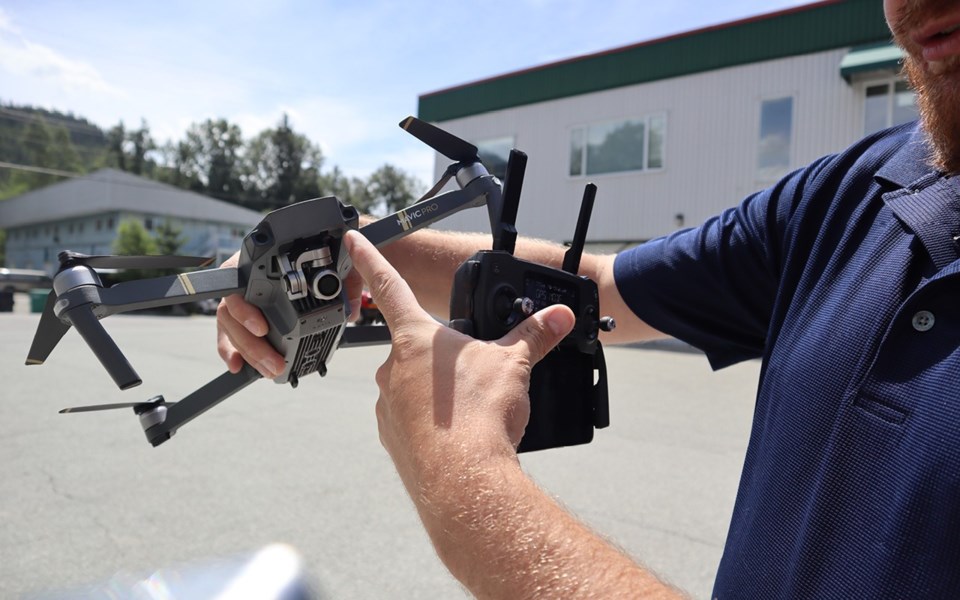 UP IN THE AIR Paul Hothersall shows off one of his unmanned aerial drones. New federal rules for drones came into effect on June 1. Photo by Braden Dupuis

Unmanned flight enthusiasts take note: As of June 1, new federal regulations for drones in Canada are now in effect.

The new rules (which apply to drones weighing between 250 grams and 25 kilograms) are now in place for all drone operators, whether they fly for fun, work or research, though nothing will change for those flying smaller or larger drones.

The regulations have two main categories of operation: basic (minimum age 14) and advanced (minimum age 16). Operators will have to pass an online exam and get a pilot's certificate, and will be required to register their drones and mark them with the registration number.

Aircrafts must not reach heights greater than 122 metres above ground and stay away from air traffic.

Those wishing to fly outside the rules must obtain a special flight operations certificate from Transport Canada.

Basic operators are required to fly at least 30 metres horizontally from (and not overtop of) bystanders, and all relevant sections of the Criminal Code (relating to things like air safety, breaking and entering, mischief, trespassing, voyeurism and privacy) still apply to drone operators.

Penalties include fines of $1,000 for flying without a licence, flying an unregistered or unmarked drone and flying where you aren't allowed (like near emergency operations such as forest fires or advertised events like outdoor concerts or parades), and $3,000 for putting aircraft and people at risk.

Fines for corporations breaking those rules are even higher ($5,000 to $15,000) and anyone who deliberately flies near an aircraft's flight path faces up to $25,000 in fines and prison time.

The new rules are good, but do leave some room to evolve, said Whistlerite Paul Hothersall.

With a masters in systems engineering and a background in the aerospace industry, Hothersall has more experience than most, having worked with drones of varying sizes going back to the early 2000s.

These days, he uses drones for both work and personal filming.

The cost ($10 to take the basic online exam) is trivial, he said, and there are some great educational opportunities in requiring people to pass an exam—though some of the new requirements might be "on the overly cautious side."

"Some 13-year-old kid wants to get into this, interested in electronics or engineering or flight or whatever, and gets told he has to do all this studying," Hothersall said, noting that many of the exam questions are lifted from the exam for a standard private pilot licence.

"A lot of (the questions) have to do with cross-country wayfinding and directional stuff with a crosswind, and stuff over 200 nautical miles ... not very accessible, and it's not very relevant to something where the initial licence is for a line-of-sight, short-range, never more than 500 metres (drone)," he said.

"They've gone from no rules, with, 'this is what you should be doing,' to, 'You have to have a licence, you have to do this.'"

"We are private property, so regardless of the changes, anyone looking to fly on the mountain still needs permission and the circumstances which warrant providing access for drone coverage are limited," Smith said in an email, noting that WB does fly drones for its own productions, but remains in complete control in those cases.

"The mountain is not a commercial shoot location, other than for partner brands, and our film and television role is limited to scenes we can host without affecting our operation," she said.

"For those editorially based story pitches where producers really want to approach us with a drone query, we ask for $10 million Drone Operator's insurance ($5 commercial general liability insurance and $5 million unmanned aerial vehicle liability insurance) and we then need to approve the plan, co-manage the shoot and it needs to work for our business.

"So it takes a lot for all the pieces come together."

Read the new rules in full at www.tc.gc.ca.