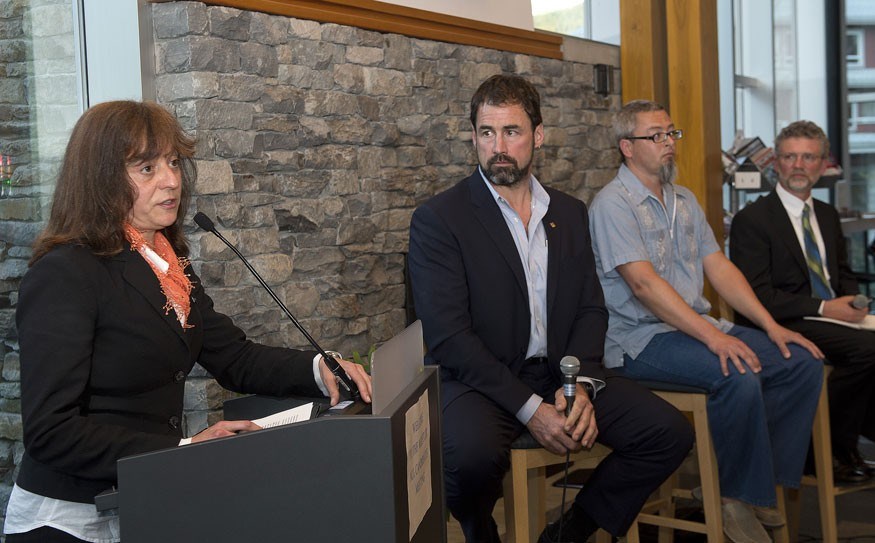 DECISIONS, DECISIONS NDP candidate Ana Santos takes her turn at the lectern in Whistler's all-candidates debate on May 6. Early voting opportunies are available, and in Whistler the polling station will be open from 8 a.m. to 8 p.m. at the Whistler Conference Centre on May 14. Photo By Bonny Makarewicz

Whistler voters will choose their new provincial representative for West Vancouver-Sea to Sky in the B.C. election on Tuesday, May 14.

Around the riding, 37,021 residents are registered to take part in the ballot. West Vancouver-Sea to Sky covers part of the North Shore, Bowen Island, Lions Bay, Squamish, Whistler and Pemberton.

B.C. residents who have lived in the province for at least six months are eligible if they are Canadian citizens and at least 18 years old.

Those not registered will be allowed to do so when they go to vote by bringing along approved identification: a single document issued by the Government of B.C. or Canada with voter's name, photo and address; or two documents that show voter's name and address; or a federal government certificate of Indian Status. Photocopies or scans will not be accepted.

The main general voting locations in the Sea to Sky corridor are the Whistler Conference Centre, Brennan Park Recreation Centre in Squamish, Pemberton Community Centre, and Ts-Zil Learning Centre in Mount Currie. Voters can cast a ballot from 8 a.m. to 8 p.m.

Early voting is available from May 8 to 11 throughout the riding and open from 8 a.m to 8 p.m. Advance polling stations will be set up at Pemberton Community Centre, the Whistler Conference Centre and at the Brennan Park Recreation Centre in Squamish. Early voting in West Vancouver takes place at the Gleneagles Community Centre.

In the last week, the candidates took part in three all-candidate debates.

About 100 people turned out at the Whistler Public Library on May 6 to hear four of the five candidates in West Vancouver-Sea to Sky talk about fish farms, independent power projects, LNG development on Howe Sound, industry and jobs, education and more.

Another 70 attended the Pemberton debate on May 1, and 140 were at the Squamish debate on May 2. The hot topics for both included tourism, the environment and what the candidates would bring to the job of MLA should they win.

Pique's election feature, with more about the debates and the candidates, can be found on page 34.