Nita Lake not ready until 2007 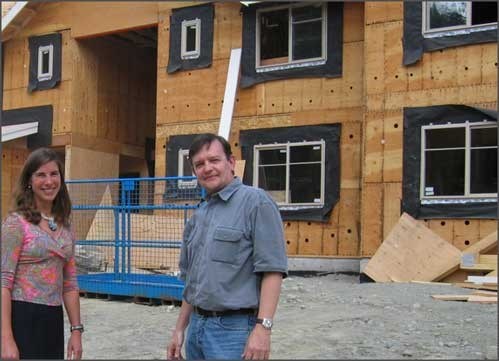 Whistler’s newest employee housing homeowners will not be in their homes before Christmas as anticipated.

Delays in hooking up hydro to the site at Nita Lake have pushed back the occupancy schedule indefinitely.

On Wednesday Hydro crews were ready to install power to the site but discovered three of the four transformers were not installed properly. The metering was not done properly either.

“If BC Hydro was to energize the transformers (as they exist) it could mean serious injury… to both the crews and the public,” said Arlene Shwetz, community relations manager for Hydro. “It’s a serious situation.”

This is the second time in as many months Hydro crews have gone to the site but the civil work was not up to standard. As such, there could be no hook up.

Developers could not say this week when the 44 homeowners would be moving into their homes.

The lack of power and heat at the homes last month meant that all the trades dealing with kitchen cabinetry, floor coverings, painting and wood finishing were let go and now have to be called back. That will be a challenge in early December.

“At this time of the year it’s a challenge because when you lose a trade and they go to another job they aren’t going to come back to you until they’ve finished what they’ve picked up at the next spot,” said David Ehrhardt, with the Nita Lake Lodge Corp.

In a letter sent to the homeowners this week, when there was still no hydro, Ehrhardt said it was unlikely there would be occupancy prior to Jan. 31.

Site superintendent Nick Ranzoni was hesitant to give an occupancy date this week. There is no asphalt on the road into the subdivision and that is a major concern he said.

“We got caught by the snow with no blacktop,” he said Wednesday. It is not clear if they can get occupancy approval from the municipality with an incomplete road.

Now he worries about the water pipes. Though they shut off the water to the site, he’s concerned that November’s frigid weather may have frozen and broken some water pipes.

New homeowner Marlene Siemens said she is frustrated by the delay and would like to know when she can move into her new home.

“It’d be nice to have a more firm date,” she said. “It’s always better to know.”

She counts herself lucky, however, because she has a place to stay until her new home is ready.

Whistler Housing Authority general manager Marla Zucht recognizes the frustration of the homeowners who are eager to get into their homes and also realizes there may inconveniences caused by the delay.

Ranzoni said the delay without power cost them at least four weeks work.

“We lost in excess of a month, for sure, that we haven’t been able to do anything inside the buildings,” he said.

Still he remains optimistic he will get power back this week and will be forging ahead with work throughout the winter.

“Hopefully it will be ready today or tomorrow,” he said Wednesday.

“We are here and we’re going to keep working.”

Several factors played a role in the delay in getting power to the site.

Ehrhardt said at the end of September they were made aware that certain Hydro equipment and service materials would not be available until mid-October.

Shwetz said the first time Hydro was asked to come to the site and hook up the power was at the end of October.

Crews arrived on Oct. 26 to find the civil work was not up to their standards.

“We can’t hook people up if it’s not done properly because we don’t want any kind of electrical problems with any installation,” said Shwetz.

Hydro crews were on standby this week as work to fix the transformers and metering was underway.