No clear solution to traffic woes 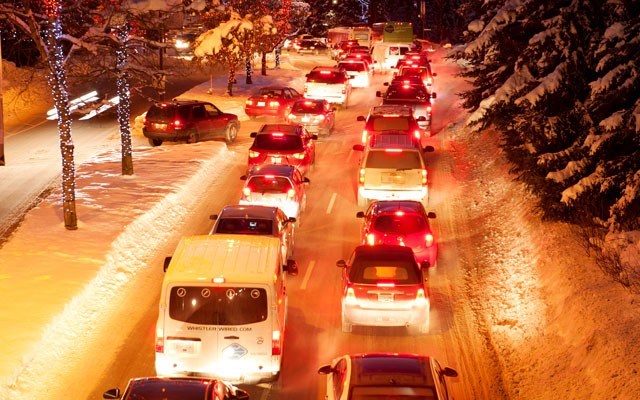 As the snow continues to pile up, long, crawling lines of traffic have been an increasingly common sight in and around Whistler.

But while everyone acknowledges the problem, there's not likely to be any relief for some time.

As business in the resort picks up, traffic congestion will likely rise with it.

"That's one of the reasons we reinstated the Transportation Advisory Group (TAG)... we're looking at all kinds of transportation issues including safety and congestion on the highway," said Whistler Mayor Nancy Wilhelm-Morden.

The TAG, which held its first meeting in early December, will look at the evidence around traffic volumes, pedestrian crossings and proposed development along the corridor, Wilhelm-Morden said.

With Highway 99 being the jurisdiction of the provincial Ministry of Transportation and Infrastructure (MOTI), the group likely won't focus on things like highway barriers or speed limits, the mayor said.

But with someone from the MOTI sitting on the TAG, those issues won't be completely left off the table.

The group is scheduled to meet again in February, "and the rough timeframe for coming forward with recommendations is probably 12 to 18 months," Wilhelm-Morden said.

"That has posed a challenge," Sturdy said, adding that he's asked the MOTI if it can install a time-delay on the light, which would help keep traffic moving through Whistler.

"Once you have a certain momentum it will go, but when you're constantly stopping and starting, especially in adverse conditions, it can be problematic," he said.

There's also the issue of safety. No fewer than four significant collisions took place on the highway over the span of four days this holiday season — all with varying injuries and highway closure times.

A collision Dec. 23 between a Nissan Pathfinder and 50-passenger bus resulted in both drivers being transported to hospital with serious injuries. The highway was closed for roughly five hours.

That same day, a multi-vehicle pileup south of Murrin Park resulted in three vehicles being towed.

The next day, Dec. 24, saw a collision-turned-rollover near the location of the bus crash a day before, and on Dec. 26 another vehicle found itself upside-down in the ditch.

Aside from the bus crash, injuries involved in these incidents were minimal, according to the Squamish RCMP.

But that isn't always the case.

A crash south of Whistler on Dec. 17 resulted in the death of 41-year-old Cristian Jose Oreamuno, of Squamish. The highway was closed for seven hours.

Since the Sea to Sky highway was upgraded ahead of the 2010 Olympics, collisions have dropped by 33 per cent, according to the MOTI — from an average of 223 per year to 152.

"While we continue to invest in safety improvements across the province, it's important that motorists take precautions and always drive to the road conditions, particularly as our highways are hit with winter storms," ministry spokesperson Sonia Lowe wrote in an email.

"In bad weather this means using caution and slowing down."

Current road conditions, advisories and closures can be found at www.drivebc.ca.

One recent addition to Highway 99 designed to improve safety is variable speed limit signs, which are expected to go live in early 2016.

"Ministry staff regularly monitors and assesses our highways to make sure they are as safe as possible, and we will continue to work with the Resort Municipality of Whistler on transportation matters along Highway 99 and the Sea to Sky corridor," Lowe said.

Accidents happen for many reasons, but there are ways to ensure your trip up the Sea to Sky is a safe one.

The first is to make sure you've got the right tires.

As of last year, it's illegal to drive with anything other than all-season mud and snow tires with a 3.5-mm tread depth between Oct. 1 and March 31, said Whistler RCMP Staff Sgt. Steve LeClair.

"When people are driving with tires that are inadequate they're plugging up the highway," he said.

RCMP can stop a vehicle at any time to check their tires, "and when there's snow events going on we'll do tire checks northbound and southbound, so we'll do them in Whistler and we'll do them in Squamish," LeClair said.

Driving without the proper tires in the winter months can also get you a $109 fine — or worse — LeClair said.

"People just have to drive to the conditions," he said.