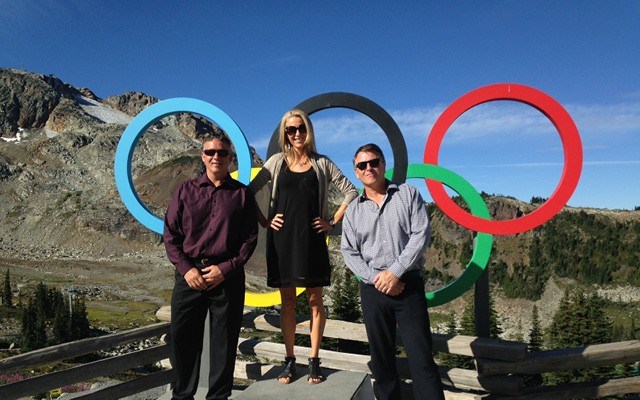 These days, however, it's safe to say Strim's business acumen is up to snuff, what with her product flying off the shelves in thousands of stores and the ongoing support from investor and former Dragons' Den star, David Chilton, who signed on the dotted line for another $250,000 investment into the company at a taping at the Roundhouse this weekend.

"When he stepped up and said he'd be happy to reinvest, it was really exciting because it just showed that he believed in our company," said Strim.

"We had a very good year," added Chilton. "It was a year when we expanded our distribution tremendously in Canada, and more importantly, (Nonna Pia's) sold well wherever it went, and that's key."

The follow-up investment — the largest reinvestment in Dragons' Den history — capped the kind of hallmark year for the Strims that most small business owners could only dream of.

It started with an appearance on the popular CBC reality show, where Natasha and her chef husband, Norm, impressed Chilton enough to earn a $100,000 investment. (The original deal was for $200,000 until Dragon Arlene Dickinson dropped out months later.) This led to a period of unprecedented growth for the company, selling their balsamic vinegars in 358 stores early last year to close to 3,000 stores today. They've doubled the size of their Function Junction production facility, recently finished a complete redesign of their packaging and, yes, they've added a CFO.

But Chilton, who officially left Dragons' Den after its ninth season, is taking it upon himself to ensure Nonna Pia's doesn't follow in the footsteps of other Canadian brands that have tried and failed to make a dent in the crowded American food market.

"I think the approach most Canadian companies have taken in the food business hasn't been the right one. They've kind of taken the scattergun approach and deal with anybody and everybody they can," he said.

"This year we'll start focusing on adding the most appropriate U.S. accounts, but we'll do it in a controlled manner. We're not out trying to win the world in 12 months because you can't do it that way."

Nonna Pia's is continuing its measured growth across the 49th Parallel after being picked up by the Pacific Northwest divisions of Whole Foods and Costco, as well as certain Safeway stores. The company also recently signed on with another American broker with the goal of expanding in the Eastern U.S.

The Strims were on Whistler Mountain on Saturday, Aug. 22, filming an update for the upcoming 10th season of Dragons' Den. They showed off the versatility of their products with the help of Whistler Blackcomb Executive Chef Wolfgang Sterr, who cooked up several dishes using Nonna Pia's balsamic reductions that will appear on the menu at Steeps Grill and Wine Bar and Christine's Restaurant.

It was also a homecoming of sorts for the Strims, a way to showcase a community that has shown so much support since Nonna Pia's humble beginnings when Norm, Natasha, and their dutiful children and kitchen helpers, Georgia and Oliver, would simmer batches of balsamic in two stove pots in their home.

"I'm proud to put Whistler on the map in another avenue on a national television with millions of viewers watching Dragons' Den. But they're also going to see how beautiful Whistler is in the summertime," said Strim. "Having the support from everyone in Whistler all the time and having people tell you the truth has been huge for us."

Nonna Pia's will roll out their new packaging in October. For more information, visit www.nonnapias.com.