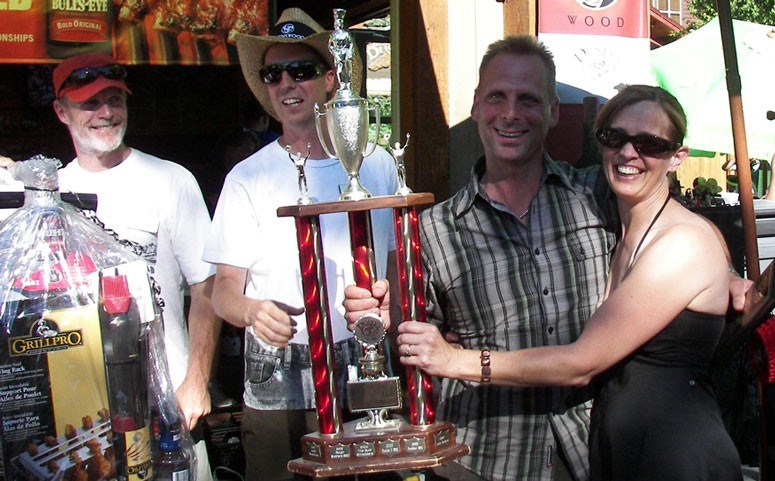 BBQ BIGGIE Justin Kyllo (second from right) is the 2012 National BBQ Champion after being judged the top competitor at the annual event held at Dusty’s. Photo by John French

For the first time in the 11-year history of the Canadian National BBQ Championships a repeat winner has been crowned.

Justin Kyllo and his Smoke and Bones barbecue team from North Vancouver won the title of Grand Champion on Sunday, Aug. 5. A total of 42 judges sampled pork butt, Ravenswood Cork and Pork, beef brisket, chicken and ribs prepared by the teams from across Metro Vancouver and Washington State. In the first 10 years of the event there was a new overall winner each year and Kyllo said he came into the event looking to repeat his top honours in 2009.

“For me it was nothing to do about prizes or nothing, I just wanted to be the first to do that,” said Kyllo. “I’m thrilled.”

To grab the top prize, Smoke and Bones took first place in the beef brisket competition, third place in the chicken event and second place for their ribs.

“I’ve been a bridesmaid this season,” said Kyllo. “I keep finishing in about third spot. It’s nice to be back on top, especially at this one. This is the big one.”

The Reserve Champions received $750 and a smaller ceramic barbecue. The second place team was a group from Snohomish, WA called Smokey’s BBQ. The Washington State took top honours with their ribs and placed second in the pork shoulder event.

Check back with Pique for more results.