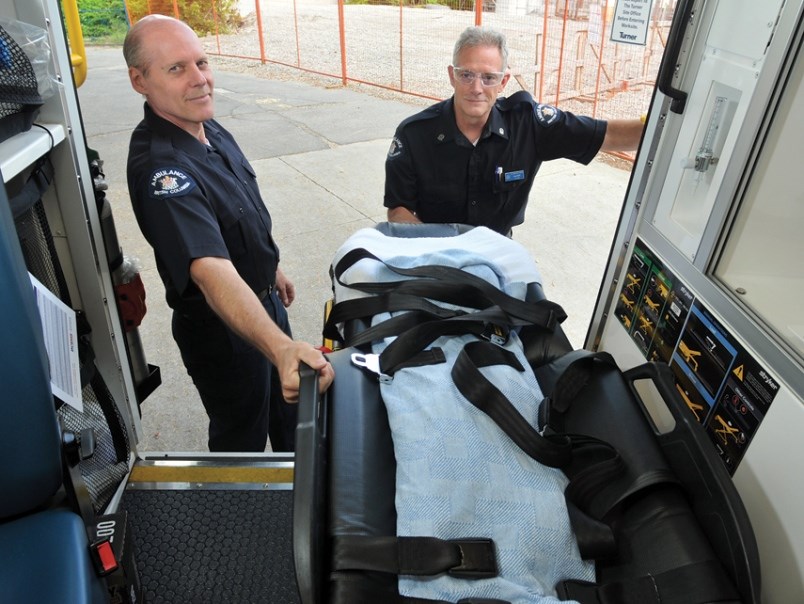 Retiring paramedic Dave Marklund checks the gear one last time with Randy Block, his partner for 30 years, outside BC Ambulance Station 256 in North Vancouver. The pair formed one of the longest paramedic partnerships in B.C. history. Photo Paul McGrath, North Shore News

For more than 30 years, North Vancouver residents Randy Block and Dave Marklund have ridden to the rescue, side by side, as partner paramedics.

It is exceedingly rare in B.C. Emergency Health Services to have the same partner on the road for so long. From chest pains to gunshot wounds, they’ve seen it all and it’s likely anyone who rode in the back of their ambulance benefited from the friendship.

The two first met in 1987 when Block was working as a scuba instructor and Marklund was getting into the sport. They became fast friends, and in doing so, learned they both had aspirations to become paramedics.

Block was the first one to land a job in Whistler. Marklund joined him soon after.

“I was on a different career path. But a few months after hearing that he was doing well up there, I decided to come up and have a talk with the boss at the time, and then I got hired,” he said. “That man quickly learned that Randy and I would commute together. On our time off, we would exercise together. We were pretty much joined at the hip. So then we were scheduled together,” Marklund said.

Because Block was slightly ahead in seniority, he was always the first up for a new position closer to home in North Vancouver, where both men wanted to return. As their careers advanced, Block never had to wait more than a few months before Marklund would catch up with him and they’d be partners again.

Then 17 years ago, they both landed plum jobs on the North Shore, assigned to the same ambulance on the same day, which was “extremely rare” in emergency health services.

“Our management said that ‘This never happens, but you guys are moving together to start in West Vancouver,’” Marklund said.

The two would regularly debrief after a call, analyzing how it went and what they could learn to make the next one better.

Marklund was always the more serious member of the pair while Block characterized himself as easier going. But they had similar senses of humour, which would only strengthen their bond.

“We would sit back and laugh our heads off —laugh to tears sometimes, and just sit and enjoy the moment and relax for a little bit until it was time for us to return to duty and get into the next event,” Marklund said.

Together, they’ve hit the lights and sirens 26,268 times. Marklund had been counting. And over 30 years, they’ve seen it all, to the point that memories of calls tend to blur together. When the 1994 Vancouver Stanley Cup riot happened, Marklund and Block were on the scene so fast, other emergency health services members joked they may have been the ones to start it.

Through it all, they never got sick of one another.

“It’s like a marriage, though. Isn’t it?” Marklund said. “You know, good days and bad days for everything, right?”

Marklund announced his retirement in May. It means Block has had to adjust to having someone new at his side.

“Dave will downplay this, but there’s no question in my mind. He’s one of the finest paramedics that our service has,” Block said. “Our friendship, you know, is locked in for life.”

Marklund agreed, at least about the friendship part.

“We joke that when we get old enough to live in a retirement facility, we’ll get a room together—put our beds in there and get a PlayStation and Xbox and play video games, and just laugh our heads off,” he said.