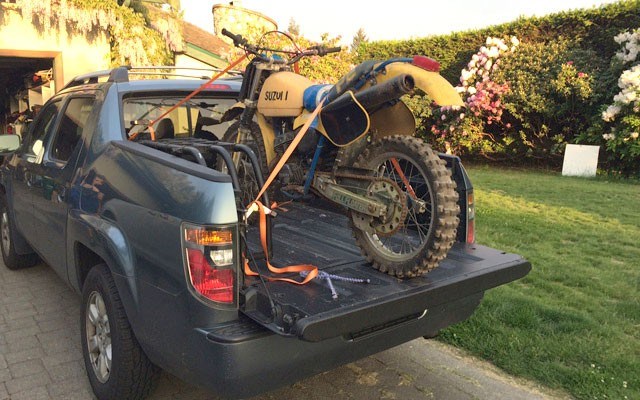 KEEP YOUR EYES PEELED A 1984 Suzuki Classic dirt bike, pictured, was reported stolen in Squamish on Friday, Aug. 7. The bike has been painted a bright yellow, blue and black since the above photo was taken. photo submitted

A North Vancouver man with sticky fingers has been linked to the theft of several mountain bikes from Whistler.

On Friday, Aug. 7, at approximately 1:30 a.m., a witness told police she saw a man being chased away from an underground parking garage. Later in the night, police recognized the 41-year-old sitting in the backseat of a vehicle with a road bike strapped to its roof and a mountain bike in the back.

"The male was recognized by police as a person involved in bike theft," said Whistler RCMP Staff Sgt. Steve LeClair.

After it was determined the bikes were stolen, the suspect, along with the driver and another passenger, were arrested for theft over $5,000 and possession of stolen property over $5,000.

The North Van man was held for court, and now police are investigating his possible connection to two other bikes that were seized and reported stolen last month.

The two other suspects were released with a promise to appear in court.

In related news, a mother is appealing to the public for the safe return of her son's "lovingly restored" vintage dirt bike, which was reportedly stolen from in front of No Limit Motorsports in Squamish on Friday, Aug. 7, sometimes between 5 and 9 p.m.

"It's a 1984 Suzuki Classic that my 18-year-old son has worked for months to pay off," said Wendy Fletcher.

The bike was chained to a fence by the store, Fletcher said, and could not have been ridden away as it had no gearbox.

Father and son feared missing turn up safe and sound

The family of a father and son can breathe a sigh of relief after the two were thought to have gone missing during a long hike from Lytton to Pemberton this week.

Police received a missing person's report on Monday, Aug. 10, hours after the pair were supposed to have returned home from a long hike on the Stein Valley Trail. Search and rescue was activated and witnesses were interviewed, who said the hikers appeared to be in "good spirits and in good health" along the trail.

Turns out the father and son had miscalculated the timing of their week-long hike and were picked up by police at the end of the day with no health concerns.