Not business as usual in the Whistler backcountry, say experts

Low snowpack and 'persistent slab' cause for concern; Avalanche Canada issues warning for sea to sky
Dec 25, 2019 4:30 AM By: Joel Barde 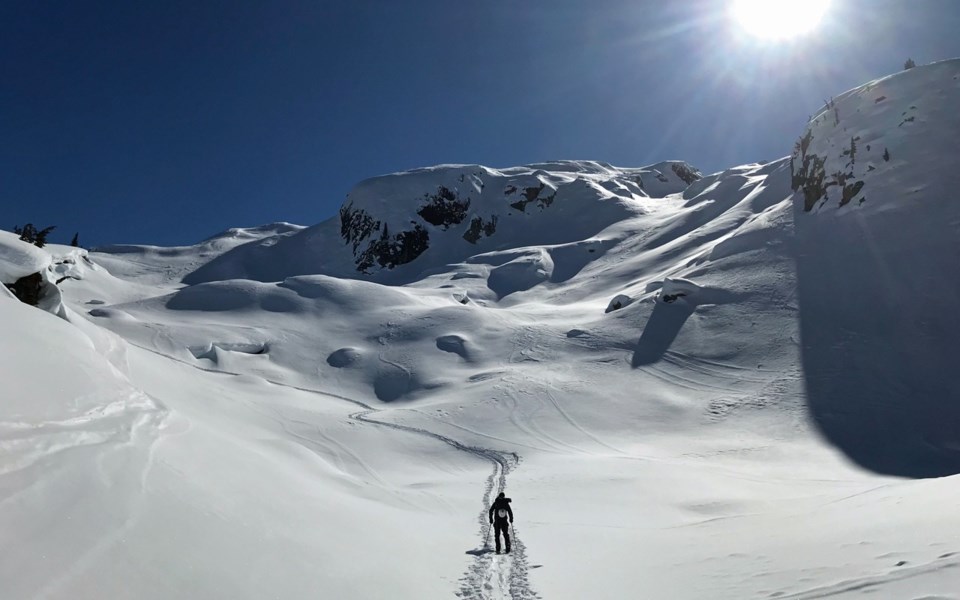 The dynamic of go-to Sea to Sky backcountry locations, including the Callaghan, has changed due to a relatively low snow base and a persistent slab that is seen as being particularly hazardous. Photo by Alyssa Noel

Experts are warning that an unusual, early-season snowfall pattern has created an unstable snow base that is uncommon for the Coast Mountain range—and particularly hazardous.

The problem stems from a melt-freeze crust that formed on the developing snowpack in mid-November.

A layer of unstable, faceted snow—which is sugar-like in texture and has weak bonds holding it together—formed atop that layer, heightening the risk of avalanches on certain slopes.

Mike Conlan, a public avalanche forecaster with Avalanche Canada, said that what we are seeing in the corridor is typically found in a "continental" snow-climate, with the Western Canada Rocky Mountains serving as a prime example.

"They generally have a relatively thin snowpack and cold air, which weakens the snow," said Conlan. "What we have on the coast is very similar to what the Rocky Mountains experience generally."

Conlan referred to the issue as a "persistent slab" avalanche problem.

And while he foresees the precarious "melt-freeze layer" gaining strength over time, that could take weeks or months and is entirely dependent on the weather.

"It will slowly start to gain strength—but very slowly," said Conlan. "It takes weeks to months for a persistent slab problem to go away, generally [speaking]."

Snow depth information from the Squamish River Snow Pillow (1,340 metres), he added, indicates that there were only 28 centimetres of snow in November.

Backcountry recreationalists should stick to conservative terrain and not assume that the snowpack will behave like it has in previous years, said Conlan, noting that even "moderate gradient" slopes can pose an avalanche threat.

"Typically, within two to three days of a storm, the avalanche danger has decreased quite a bit," he said, speaking specifically about Sea-to-Sky backcountry conditions.

"When we have a persistent weak layer within the snowpack, it will take longer for the avalanche danger to decrease."

In a Dec. 15 report on the Association of Canadian Mountain Guides website, guide Brad White wrote that the current snowpack structure along the Spearhead Traverse is a "loaded gun" waiting for upcoming storms.

"This layer has been the failure layer for several persistent slab avalanches that have been both skier triggered or sympathetically released [released in direct response to the release of a nearby avalanche]," read White's report. "The upcoming period is a time to stick to conservative, low-angle terrain and be aware of the potential for overhead slopes or nearby steep slopes that may effect."

Speaking from the Callaghan area, Ross Berg, owner and head guide for Altus Mountain Guides, said that while there is enough snow to be ski touring, the avalanche conditions that he's seen are "very different" from previous years.

"It's going to be a pretty widespread challenging instability that I think the coast is not really used to dealing with," said Berg, who was taking a break from running an avalanche course.

Berg added that the hot summer and last year's relatively low snowfall led to a significant amount of glacial melt, leading to an additional hazard in the form of crevasses that now have a thin layer of snow on them (a major hazard to anyone who might try to ski over top of them).

And while he doesn't want to scare anyone away, Berg said it is important that all backcountry recreationists take a cautious approach and fully appreciate that this season isn't business as usual.

People, he said, shouldn't assume that they can ski in the same way they have in previous years.