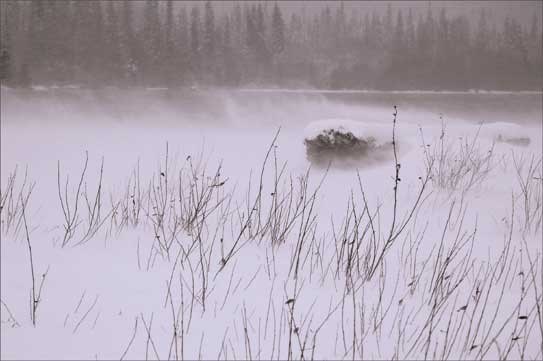 There is no doubt that it is cold in the Sea to Sky corridor for this time of year, said Environment Canada meteorologist Chris Doyle.

“You can easily get temperatures of -18 in Whistler December through January, but we don’t usually see this in November,” he said.

“So temperatures are running at least 10 degrees below normal. It is profoundly cold for this time of year no question about that.”

Adding to the bone-chilling temperatures this week a light breeze from the north is making it feel worse — and it’s that wind chill temperature which is the buzz around town.

Wind chill is the apparent temperature felt on exposed skin due to the combination of air temperature and wind speed.

“With wind it feels a lot colder and that is because when air moves it blows through your clothes and blows past your face and is actually removing heat from your body,” said Doyle.

“Wind provides an effective heat transport mechanism to remove heat from a human being or animal and your body senses that removal of heat as an increased coldness.”

The exact definition of wind chill is controversial since it can have such an effect on winter tourism.

The U.S. military developed the first wind chill formulae during World War II. In 2001 the formulae were revised to reflect more accurate theories and testing than those done by the military. Today’s formulae uses a mathematical model developed at Environment Canada that approximates how skin temperature, especially on the face, changes with various air temperatures and wind conditions.

The math was put to the test when a group of 12 volunteers went through clinical trials in a refrigerated wind tunnel to see if the formulae were accurate.

The coldest wind chill on record in Canada was a bone chilling -78 recorded in Kugaarruk, Nunavut.

With a wind chill of -25 to -34 there is a risk of frostbite. By the time the wind chill drops to -49 exposed skin can get frostbite in minutes, and at -50 and less hazardous frostbite conditions exist.

The deep freeze in the Sea to Sky is expected to thaw to seasonal temperatures by the weekend as a new front moves in bringing some new snow.

By then it’s hoped, said Whistler-Blackcomb spokeswoman Christina Moore, that the snow base in the alpine will have topped the 4-metre mark.

“That’s what we are hoping,” she said.

This is the snowiest November on record since 1994, when 351 centimetres of snow fell. As of Wednesday afternoon, 395 centimetres have fallen.

But even with all the white stuff falling Whistler and Blackcomb still had their snow guns going full bore earlier this week.

“As soon as the temperatures dip low enough we look to enhance what we have naturally, especially on the lower mountain areas, so we take every opportunity we can, even though we have received record snowfall,” said Moore.

Currently there are 22 runs on Whistler open and 18 on Blackcomb. It’s hoped that the Harmony area will open this weekend.