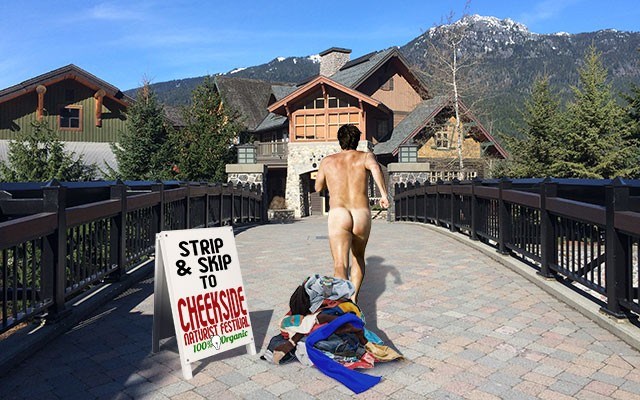 Keep your eyes on the road — Creekside is about to get a whole lot more animated for five days this summer.

The first annual "Cheekside Naturist Festival" is officially slated for August 14 to 19.

"August seemed like the perfect month to come to Whistler and be naked," laughed Pené Esposti, coordinator of the festival and longtime member of the Federation of Canadian Naturists.

"We chose Creekside because it was slightly more secluded but still very much a part of the Whistler culture."

Esposti said the festival is hoping to bring more than 1,000 naturalists to the resort over five days.

But is he worried some might take offence to the culture of nudity?

"No, because people pretend to be bashful about nudity but really, who doesn't love being naked?" he said.

"We were born naked, weren't we? I'm naked right now."

"I think it's just fabulous," she said.

"It hearkens back to the old days in Whistler when no one wore bathing suits at Alta Lake, and you know, the swimming beach at Mount Whistler Lodge was bathing suit free, so this is very consistent with what has happened in Whistler in days gone by."

The Cheekside Festival was too late to apply for RMI funding from the municipality, but Wilhelm-Morden said the RMOW would support it by providing banners and signage.

"We do that with most festivals," she said.

"They're too late for RMI funding, but if occupancy levels go up as I expect they will, we may well provide some RMI funding in the future."

So can Whistlerites expect to see the mayor bare all at the inaugural Cheekside Festival?

"I've got five months to get in better shape and I'll be there."

While some of the events scheduled for the five-day festival will take place indoors or in the backcountry, many are scheduled out in the open as well, such as morning yoga in the Creekside parking lot, evening strolls on the Valley Trail and the last-day ditch pick between Creekside and Whistler Village.

"We are naturists, after all, so we do enjoy cleaning up," Esposti said.

The Whistler RCMP has committed to directing traffic on the highway during the ditch pick — but Esposti is used to the curious stares of strangers.

"If that offends you, I'm sorry. But not really."

Wilhelm-Morden said she's not expecting any complaints from the locals.

"Well we still have the nude dock over at Lost Lake, and you know, I think people here in Whistler are pretty free spirited and accepting of naturists of all types, and I think it's a great idea," she said.

Asked if she had anything else to add, Wilhelm-Morden said she wanted to wish everyone a happy April Fool's Day.