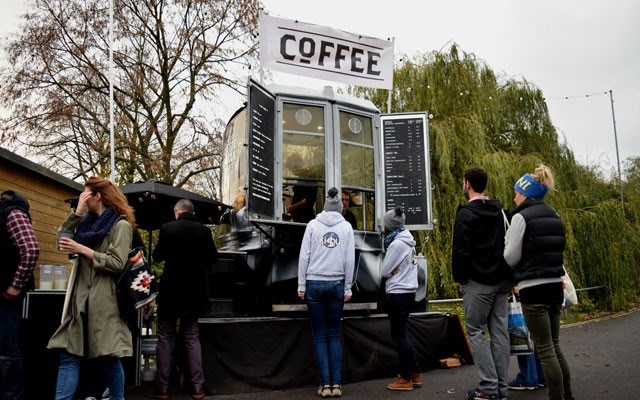 RIDING HIGH The Coffee Gondola takes a little piece of Whistler's history around Europe for the ski season. Photo submitted

There's no blueprint for converting an old Whistler gondola into a mobile coffee shop. But that wasn't going to stop Tom Steggall and Josie Adams from seeing their dream of The Coffee Gondola come to life.

Now No. 84 of the old Whistler Village Gondola is seeing the world in its sunset years, repurposed and rebranded as The Coffee Gondola.

This little piece of Whistler history will be travelling around Europe this winter, hitting up various ski and snowboard festivals and events, after its grand unveiling at the London Ski and Snowboard Show in November.

"When we got it, it was pretty grotty," recalled Steggall, speaking from Dorset, of ripping the packaging open once they picked up their gondola from the London docks early last year. "Twenty-odd years of smelly snow boots and loads of cigarette butts... kind of fell out when we unwrapped it."

Their mobile coffee dream all began in the summer of 2014 when the couple, who have done a few seasons chasing the snow in Europe and Japan, decided it was time to start working for themselves — chalet hosting and working as a private chef at ski resorts wasn't going to cut it in the long term.

They had seen the food trucks at Japanese resorts and that seemed like a pretty good idea... until they had the epiphany of converting a gondola rather than an old truck.

"We emailed pretty much every ski resort around the world to get a hold of one, and we came across the one in Whistler, up for auction," said Steggall.

They say timing is everything.

It just so happened that in the fall of 2014 Whistler Blackcomb was auctioning off the last remaining gondola cabins — 11 "wrapped" cabins — after selling the rest of the fleet of roughly 150 cabins. The cabins were part of the Whistler Village Gondola, which carried skiers and snowboarders and tourists and bikers up Whistler Mountain for 25 years.

Not long after the auction, No. 84, wrapped in the red GMC decal, was on its long journey from the mountains of Whistler to the rolling hills of the Dorset countryside in southwest England for a complete makeover.

It wasn't an easy conversion.

"Difficult in the sense that neither of us are particularly well educated in metalworks or had ever converted anything before," laughed Steggall. "There wasn't a blueprint."

And so began 10 months of solid work.

For the first two or three months they worked several jobs, saving money for the conversion.

"We both moved back in to Josie's mum and dad's house, quit our jobs, and we've just been working on it constantly without any kinds of interruptions," he said.

It was rebuilt from the ground-up — bolted onto a trailer so it's always on wheels, 10 power sockets added, the trial and error of fitting in coffee machines. And then, of course, there was the other side of starting up — the ins and outs of opening a business, registering names, getting licenses.

"There were lots of points along the way when we wondered what we were doing," said Steggall candidly.

That was all worthwhile when they rolled up to the massive annual Ski and Snowboard Show in London in November for the first official day of trading; a homecoming of sorts seeing the gondola around avid snow hounds.

"In Dorset I reckon it's probably lost a little bit on the people round here," said Steggall. "But the London ski shows... definitely."

They sold 2,000 coffees that weekend.

"It's nice to see money going the other way," he said.

Though the gondola is completely revamped, there are still a few odes to its past, like the alpine responsibility code sticker inside, and a little story of its past and future on the outside — Parents: Poma; Birthplace: Whistler; Redundancy: 2014; Rebirth: 2015; New parents: Tom and Josie.

No. 84 appears to be in good hands and ready to ride.