Municipal boundary expansion will not include the entire Callaghan Valley
Jun 25, 2004 2:26 AM By: Alison Taylor 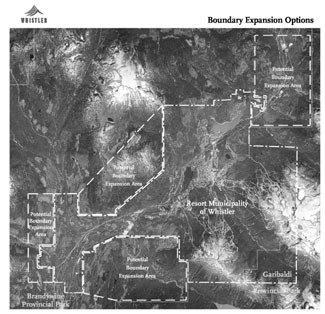 Whistler could be almost twice its size by next year.

The municipality is applying to the provincial government for a boundary extension that will see the resort grow from 16,500 hectares to close to 27,000 hectares.

Though a sizable expansion, it’s much smaller than what Whistler originally had in mind.

"Our original proposal was much bigger than this," said Municipal Administrator Jim Godfrey at Monday’s council meeting.

That’s because the original proposal included the bulk of the Callaghan Valley, which is not included in this redrawing of the municipal map.

Despite Whistler’s desire to include the Callaghan, Bob MacPherson, RMOW general manager of planning and development services, explained that the province was reluctant to include it in Whistler’s current expansion plans because there are a number of competing interests vying for a stake in that area.

It was not welcome news for some councillors.

"It’s really disappointing that (the expansion is) not taking in the Callaghan," said Councillor Caroline Lamont at Monday’s meeting.

"I guess there’s really nothing that we can do, but it’s unfortunate."

She explained her disappointment after the meeting saying that the boundary expansion was planned in order to give Whistler more control of its outlying areas.

"We should have some say (in the Callaghan)."

A classic example of Whistler losing its control she added is the proposed campground planned on the south edge of Whistler.

The campground application is currently making its way through the Squamish-Lillooet Regional District approval process, despite opposition from the RMOW.

Lamont said the expansion could help control things like this.

Whistler has long planned for a large boundary expansion to ensure it had control over its outlying areas and to protect the municipal watersheds.

Since the 1993 Comprehensive Development Strategy, the long-range plans have called for an expansion that was to follow the peaks and ridges of the surrounding mountains to include all the watersheds in the Whistler and Callaghan Valleys.

This included the Callaghan Valley, Rainbow and Sproatt mountains and the lands at the base of Wedge Mountain.

The perfect opportunity to negotiate a boundary expansion came with the 2010 Olympic Games.

Whistler bargained for a series of legacies that were to be delivered by the province whether the bid was successful or not.

The boundary expansion was one of the legacies. Other legacies are "financial tools", which have yet to materialize, and a 300-acre land bank for the creation of resident housing.

The request for new boundaries, which was approved by council on Monday night, covers four main areas.

Whistler is looking to expand north and east next to the Green River, south to include the Whistler Interpretive Forest and Jane Lakes, west to encompass Mount Sproatt and southwest to the lower Callaghan Valley west of Callaghan Creek.

The new boundaries include rural lands that are primarily made up of Crown lands, with some privately owned, leased and licensed lands.

The municipality will not be encouraging or initiating development on these lands.

MacPherson said that though the province was hesitant to hand over the entire Callaghan Valley at present, officials indicated that they would be open for discussions further down the road.

Councillor Ken Melamed suggested it might be prudent for council to add into their request for the expansion that Whistler would have preferred to have the whole Callaghan Valley and that they would be looking for it in the future.

"The province is going to be reluctant to give us more (at a later date)," he added.

Council agreed to include the forewarning in the request.

Municipal staff will now submit the boundary extension proposal to the Ministry of Community, Aboriginal and Women’s Services.

If Cabinet approves the expansion, Whistler’s Official Community Plan will be amended to include the new areas.

The SLRD land use bylaws will stay in place as though they were RMOW bylaws until they are amended or repealed by council.

MacPherson said the expansion could be completed within the year.