Once upon a time, Breckenridge also thought it was impervious to forest fires 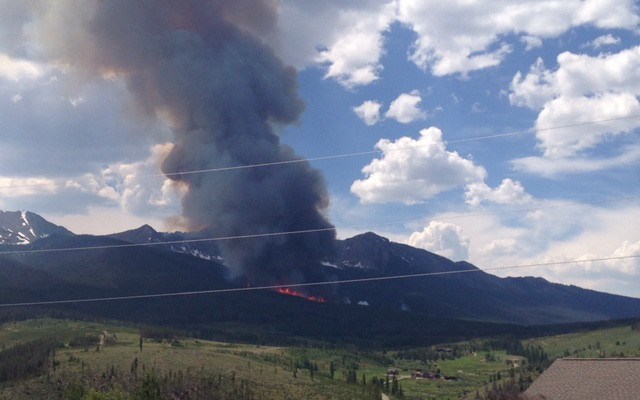 Breckenridge was full of people when the fire erupted last summer in the nearby Tenmile Range. "It was scary. It was so close," says Peter Grossheuesch, the town's director of planning.

It was July 5, the day after the U.S. national holiday, a warm day even at 2,900 metres in elevation. The wet, spring snow that had doused Summit County in late May was gone. From the Breckenridge office of Grossheuesch, just three kilometres away, smoke billowed into the sky.

"Everybody got real serious, real fast," he remembers.

The fire had been human caused, investigators later learned, but at the time they were most insistent on protecting humans. High wind can easily send fire brands 1.5 kilometres aloft and onto roofs and into front yards. In the most vulnerable neighbourhood near Breckenridge, a rural subdivision called Peak 7, residents were evacuated.

Then the winds shifted again, turning the blaze back on itself. The fire was contained and then extinguished. The emergency was over.

Like hurricanes in Florida, catastrophic, large-scale wildfires are always a threat to Colorado mountain towns. But this realization is relatively recent. Fires were unheard of during the 1960s and 1970s, a cooler, wetter time. Many forests around ski towns had been logged heavily in the century before, and the trees were young. Those fires that did occur were quickly suppressed.

Things began to change in 1988 as fires raged most of the summer in Yellowstone National Park, at one point threatening the iconic Old Faithful Inn. Then came more fires along Colorado's Front Range in the 1990s, the blazes covering more and more ground.

A pivotal year in Summit County was 2002. Spring arrived early, hot winds in April eviscerating the thin snowpack. Peak runoff came six weeks early, almost too weak to be noticed. In the first weekend of June, three major forest fires erupted, one near Durango and another at Glenwood Springs. The largest, called the Hayman Fire, was just across the Continental Divide from Breckenridge, burning 138,000 acres and creating an eerie orange pall over Denver.

That was the year that locals in Breckenridge began thinking about forest fires differently. It also caused them to think about timber sales and forests thinning differently. Both were instinctively opposed. Those attitudes were mirrored in regulations adopted by Breckenridge and other local jurisdictions. Regulations required special permits for removing trees from yards around homes.

The story was told — Grossheuesch has heard it, but could not confirm it — that the writer Mitch Albom, author of Tuesdays with Morrie, had been fined once for cutting a tree on his property in Breckenridge.

Changes in public policy came in a hurry. In 2006, the county adopted a community wildfire protection plan. A wildlife council continues to meet regularly. In 2008, voters approved property tax assessments that yield $500,000 a year for grants to assist neighbourhoods and homeowners associations. The money can also be used to create water cisterns, to assist firefighters.

A portable wood-chipper was purchased with the money, and it is taken to every street in the county at least twice a year. After the fire in July, people's interest has heightened in use of the chipper.

The chips have been trucked to both a biomass plant in Gypsum, about 95 kilometres away, and to a nearby molybdenum, where the wood fibre is used in remediation of old tailings piles. The chips may also be used in restoration of the Swan River, near Breckenridge, from impacts of dredging for gold in the early 20th century.

Insurance companies have also pushed for efforts to provide what is called defensible space, by cleaning of vegetation around homes.

In some instances insurance companies are asking homeowners to have their properties inspected by the local fire districts.

A shift has also occurred at the Summit County courthouse. "We used to require people to preserve trees and use them to screen development as much as possible," says Jim Curnutte, the county planning director. "We would not let you cut down a tree. Now, we might require you to cut down a tree, because of defensible space ordinance of the building code. If you come in for a new permit or a substantial remodel, you have to meet your defensible space requirements."

Vegetation must be at least nine metres from a structure and in some cases 30 metres. But county governments cannot impose defensive space requirements retroactively; Breckenridge and other home-rule town governments can.

Summit County Commissioner Dan Gibbs, who is also a wildland firefighter, says that all planning now assumes fires will occur. "It's not a matter of if but rather of when we have more fires in our community," he says.

As a firefighter, he has worked in California and elsewhere. "I have seen homes with defensible space that were saved, and I have seen homes where vegetation is connected to houses, and those homes have been destroyed," he says. It's not an absolute, he adds, but he also knows that firefighters will spend more time trying to save a home with defensible space for a simple reason: they have improved chances of success.

Educating home owners about wildfire risk is important, but Summit County officials say there's often a difference in attitudes between locals and those who are second-home owners. The non-residents more generally resist efforts to impose defensible space around buildings.

Another major player has been Denver Water, which built the dam that creates Dillon Reservoir. It collects water for diversion to the Denver metropolitan area and the needs of a quarter of all Colorado residents. The water agency has found forest fires expensive. Two hot-burning fires, first in 1996 and then again in 2002, caused heavy erosion into Denver's reservoirs in the foothills southwest of the city. The soils there are highly erosive and granitic by nature. The reservoirs had to be dredged, with incomplete success.

Better and less expensive than remediation, the agency decided, would be prevention. In a program called Forest to Faucets, Denver in 2010 partnered with state and federal forestry agencies to thin forests in Summit County and the Winter Park area. The city draws water from both areas.

A then-and-now photo shows a dramatic difference: the first time a thick forest, many trees dead or dying, the blue waters in the distance. And then, a gladed area: a few trees here and there, but with lots of space between them.

In February, Denver announced a five-year renewal of the partnership, putting in US$16.5 million to match like amounts from the state and federal agencies for continuing thinning of forests. The first phase also saw 750,000 trees being planted.

In announcing the commitment, Denver Water's CEO Jim Lochhead said Congress should take heed and provide money to the Forest Service for forest management in critical areas. This would reverse the federal government's approach, which has been to allocate massive amounts of money for putting out fires.

Ironically, past forest suppression is at least partly to blame for the growing threat of wildfires. "Smokey Bear did too good a job," says Scott Fitzwilliams, supervisor of the White River National Forest, which administers a majority of the land in Summit County. In speaking to officials from Colorado ski towns in August, he also cited drought, which helped produced the bark beetle epidemic that has killed vast swathes of lodgepole pine in Colorado.

Fitzwilliams says there is no single answer to the threat of fires near mountain towns. Prescribed fires — something the Forest Service has been pushing since the 1990s — are part of the answer, more forest thinning is another answer.

But ecologists also warn that there's danger in thinking that cutting trees is the only answer. There are just too many trees to cut, says Ray Rasker of Headwaters Economics in Bozeman, Mont.

"Treatments in and of themselves are not going to save the day in terms of changing patterns of fire," he says. Treatments do make sense in targeted areas, such as what Denver Water is doing, he says. But fire altogether cannot be contained. It's part of the ecosystem.

Instead, communities need to adapt themselves to living within a fire ecosystem, he says. His consultancy, working with two others, helped Summit County create its community plan.

Summit County had smoky skies this summer beyond those produced by its own fires. But the smoke was nowhere near as bad as that of Whistler, says Grossheusch, who visited Whistler during the height of fire season. "The smoke was just ungodly there," he says.

Grossheusch sees Whistler and Breckenridge as being in very different ecosystems, with the greater precipitation of Whistler making fire less of an immediate threat. But then, that's what they once said about Breckenridge. But all it takes is one good drought.