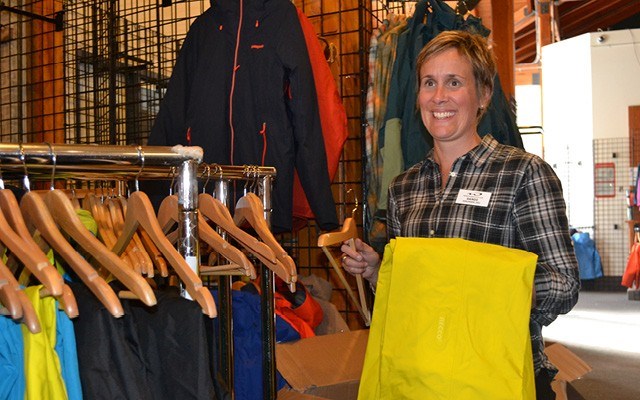 For many, Whistler Blackcomb's legendary Turkey Sale marks the unofficial start of the winter season. The annual event draws between 10,000 and 14,000 shoppers hungry for "waist deep" discounts on ski and board gear.

It was therefore fitting that Gloria Gaynor's famous disco hit, "I Will Survive," blasted through the Blackcomb Daylodge as crews transformed the space into a retail hub, and a crew assembled a giant plastic tent outside on Oct. 2.

"We're just getting started," explained Murray Hunt, a Whistler Blackcomb retail manager who is leading the set up.

"By Wednesday all the inventory is physically in the building and we start putting the finishing touches on set up.

"I see it as a retail dream team under one roof.

"It's a once a year opportunity to work shoulder to shoulder with our management, front-line staff, our buyers, with our reps. We're all under one roof, and we're putting our best face forward."

As in past years, the Daylodge is broken into departments, and a store manager heads each one, explained Hunt.

Last season's Whistler Blackcomb retail stock is only one source of product. Many of the items are samples or clearance items that have been purchased from companies specifically for the sale.

The transformation of the Daylodge had begun a week prior. The cast-iron seats and tables that usually line Merlin's Bar and Grill were taken downstairs, where they now sit in a neat row.

There is a formula for organizing such an event and it's one that's been "fine tuned" over time. "I like to think we're pretty good at it," said Hunt, with a smile.

The Turkey Sale is all about finding deals, with some merchandise marked 70-per-cent off. When asked for tips on what shoppers can do to get what they're after, Hunt echoed Whistler Blackcomb's website, which warns against "anarchy shopping" and advises shoppers to make shopping lists.

And if you're not there at the very start of sale, don't fret. They restock every night, said Hunt. "We encourage people to come the next day if they don't find what they're looking for."

Major sales can bring to mind images of Black Friday madness — people busting down doors, getting into brawls in department stores. But Hunt said Turkey Sale shoppers are chill: "It's a long sale," he explained. "Our crowd has built in their expectations. They know what they're in for."

The Turkey Sale will continue a popular tradition this year: Selling actual turkeys.

Whistler Blackcomb pays for the birds, with all of the money going to the Whistler Food Bank.

"It brings a lot of the locals out. You see the same people lining up every year for their $15 turkeys," said Hunt.

Outside, the Whistler Mountain Ski Club (WMSC) will carry on its longstanding ski swap. People sell used gear, and a portion of sales goes towards the club.

The event is the club's biggest fundraiser of the year, explained WMSC executive director, Mark Tilston. "Come as early as you can. The best equipment goes soonest," he explained.

The Whistler Blackcomb Turkey Sale is an important event for the wider Whistler community.

"It's a way we mark the change of the seasons," said Marc Riddell, WB's senior manager of communications, noting that this year's sale will coincide with the release of Magnetic, a ski and snowboard film produced by Whistler Blackcomb and filmed here.

For Hunt, who has worked for Whistler Blackcomb for the past 14 years, the sale is also an opportunity to see old friends and contribute to the excitement that accompanies another year on the slopes.

"The excitement of people starting to flip the switch and think about winter — that's pretty rewarding," he said.