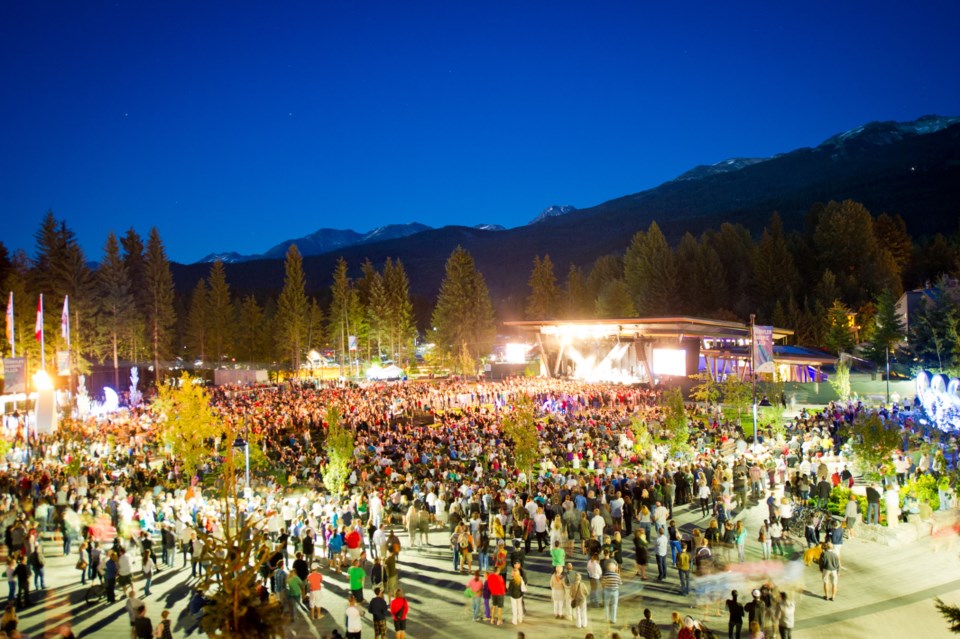 MOVIES UNDER THE STARS: What could be better than sitting under the stars to watch movies. This summer Whistler Olympic Plaza will host movies on the big screens outdoors. Photo courtesy of Tourism Whistler by Mike Crane

Film lovers have another place to watch movies this summer - on the Great Lawn, in the open air, and under the stars at Whistler Olympic Plaza.

As part of the "Whistler Presents" summer entertainment program and programmed by the Whistler Film Festival Society (WFFS), Celestial Cinema will take place at the Plaza, starting August 1 with a showing of Midnight in Paris.

Written and directed by Woody Allen, Midnight in Paris, his 41st movie and biggest commercial hit ever, is the perfect summertime flick: a love letter to the charms of one of the world's great cities.

"There's something special about watching a great movie outside under the stars," says Paul Gratton, Whistler Film Festival Society's Director of Programming. "We look forward to presenting films that are a mix of crowd pleasers, audience and critic favorites this summer in Whistler as we gear up for our twelfth edition of the film festival."

Celestial Cinema at the Whistler Olympic Plaza features free, family-friendly films on Wednesday nights during August. The screenings will begin each night around 8:00 p.m. and end by 10:00 p.m.

Everyone is encouraged to bring lawn chairs, blankets, and snacks. All ages are welcome and all films will be rated PG (Parental Guidance). Smoking and alcohol are banned

The series is weather-permitting and in the event of rain will be moved to Millennium Place with seating available on a first come, first served basis. The decision to move to the indoor venue will be made at 6:00 pm on the evening of the screenings.

On August 8 catch The Whale, narrated by Ryan Reynolds. It tells the true story of a young, wild killer whale - an orca - nicknamed Luna, who lost contact with his family on the coast of British Columbia and turned up alone in a narrow stretch of sea between mountains, a place called Nootka Sound.

On August 22 Marley will be screened. Bob Marley's universal appeal, impact on music history and role as a social and political prophet is both unique and unparalleled. Marley is the definitive life story of the musician, revolutionary, and legend, from his early days to his rise to international superstardom.

The "Whistler Presents" Festivals, Events & Animation (FE&A) program is funded by the Province of British Columbia's Resort Municipality Initiative (RMI), monies set out to build tourism in the province.

Further movie screenings will be announced soon. Check back with the Pique form more on this story.