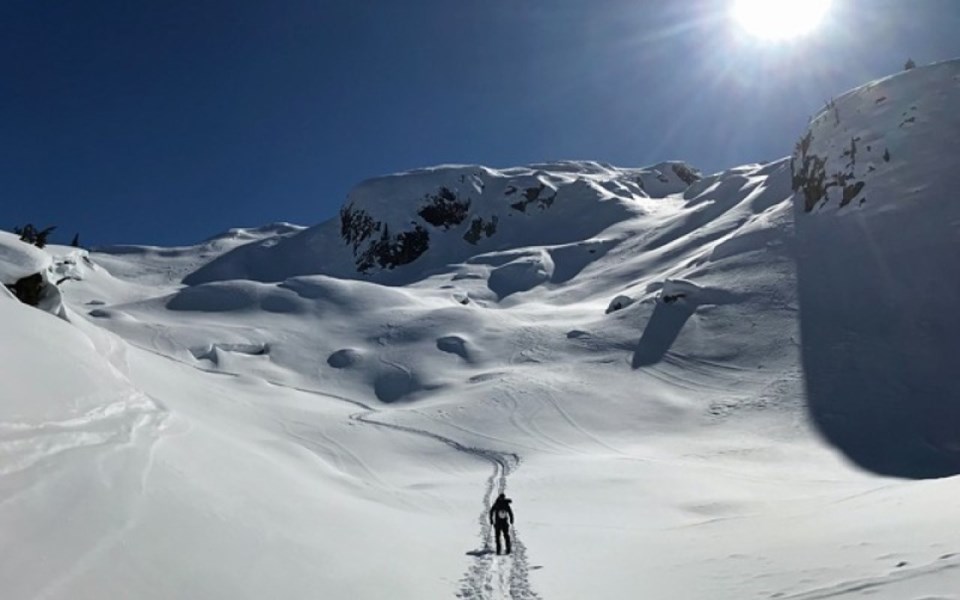 AVY WARNING Avalanche Canada is recommending against travel through backcountry avalanche terrain, after a dry fall and heavy recent snowfall has combined to create a weak snowpack across the Sea to Sky. Photo by Alyssa Noel

A weak snowpack that has been "overloaded" with new snowfall in recent days continues to pose a risk for backcountry recreationalists, according to Avalanche Canada.

"Clearing skies may lure you into bigger terrain, but this is not the time to expose yourself," read a Tuesday, Jan. 7 advisory from the national forecasting organization. "The recent snow may remain touchy and it has loaded a weak snowpack in parts of the region. The snowpack will need time to stabilize."

At press time, the danger rating for the Sea to Sky was at high for alpine and treeline areas. Travel through backcountry avalanche terrain is not recommended.

More than 50 centimetres of snow fell on the corridor above 1,500-metre elevation on Monday, Jan. 6, which "may be loading a touchy weak layer of feathery surface hoard buried around 100 to 150 cm," the forecast read. Multiple weak layers are buried deeper in the snowpack, including a variable layer of surface hoar and crust from mid-December as well as "a deeper layer of sugary facets and crust" from late-November, Avalanche Canada said.

"It's been quite stormy for the last few weeks but the fall was relatively dry, so that set up a weak snowpack structure, so when there was little snow on the ground in November and early December, it formed a lot of weak snow, and since then, these past few weeks when it's been snowing harder, the bottom of the snowpack isn't able to support the weight of this new snow," explained Avalanche Canada forecaster Simon Horton in an interview this week. "We've seen what we call 'persistent slab avalanches,' which are much thicker than what you'd typically get just during a storm."

On Friday, Jan. 3, Avalanche Canada took the rare step of raising the danger rating to extreme for the corridor.

"We typically see extreme ratings about once or twice per year and that's across all of Western Canada," noted Horton, who added that it was "a combination of a very high probability of avalanches and the fact that the avalanches are expected to be very large" that led to the rating.

Whistler Blackcomb (WB) has kept alpine terrain closed so far this year due to what it called an "unusual and unstable snowpack."

"Whistler Blackcomb Patrol has an industry leading avalanche control program to mitigate risks in our upper alpine. Over the last two weeks, the resort has experienced a large snowfall in a short amount of time," read a Jan. 7 statement.

In the same release, WB also confirmed a ski patroller was caught in a slide on the morning of Jan. 1 while conducting routine avalanche control in a closed area. While WB wouldn't disclose the location, sources told Pique the slide took place on Pika's Traverse on Whistler Mountain and briefly submerged the patroller before being rescued. WB said the patroller was uninjured and voluntarily returned to work the same day.

Marc Riddell, communications director for Vail Resorts West Coast, advised the public to obey all signage and rope lines to stay safe. "They're there for a reason," he said.

To read the full avalanche warning and forecast, visit avalanche.ca/forecasts/sea-to-sky.