Who will pay the millions it is expected to cost to relocate facility is unclear
Dec 4, 2009 5:51 AM By: Alison Taylor 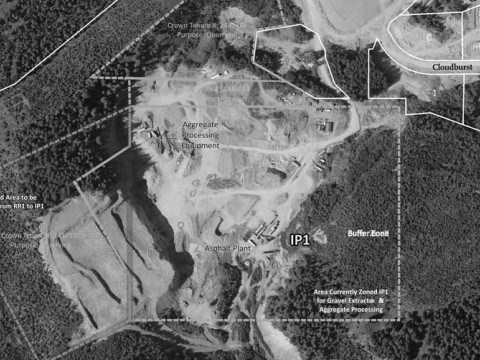 The owner of the Alpine Paving asphalt plant, which has just been ordered out of the Cheakamus Crossing neighbourhood, said the move can't be done in the timeframe the municipality has demanded.

"First of all, I can't do it in six months - period," said Frank Silveri, upon returning from a weeklong vacation this week and learning that council has directed him to find a new place to operate by June 1, 2010.

He also isn't willing to pay what he estimates to be at least a few million dollars to move his operations, which have been running for about 15 years in an area that was once the town dump.

"I'm certainly not going to pay for it, that's for damn sure," he added.

It is not clear where that money will come from and who will be on the hook to pay for it. There are no provisions for it in the 2010 municipal budget, passed by council Tuesday night.

Silveri said relocating an asphalt plant isn't a simple matter. His site right now is set to be taken over by the military from Dec. 15 to March 15 for the 2010 Olympic Games. That gives him less than three months in the spring to set up a new shop.

Where will he move to, he asked. Will the site have power, as his current site does? How can he honour his spring contracts in the midst of a move?

"You can't do that overnight," he said.

It is still unclear what those rights are given that Silveri has been operating there for 15 years with permission from the municipality but without official zoning.

"If someone didn't do the paperwork, is that my fault?" he asked of the missing zoning.

Silveri was dismayed to learn of council's deadline decision, made at a special council meeting last week, which came in the wake of immense public pressure from the new owners of Cheakamus Crossing, many of whom demanded the removal of the plant over concerns about toxic emissions, the smell of asphalt and the plume of steam that comes from the plant when it operates.

"How can they just run you out of town when you prove you're not polluting anything?" asked Silveri, referring to his clean environmental record with the province for plant emissions.

The company's emissions monitoring consultant, Alan Lanfranco, who has tested Alpine Paving's emissions for the past eight to nine years, was on hand at a municipal open house last Thursday to answer questions from residents.

The plant, he said, has always been in compliance with provincial standards.

When asked if it was safe for residents to live close by (the closest home is about 300 to 400 metres away), Lanfranco said:

"It's a difficult question.

"If the atmospheric conditions and the number of hours the plant operates got to a threshold and the wind blew at my residence on a very frequent basis, that would be more concerning than if the wind was almost always predominantly from the other direction. So the frequency and the intensity is the issue. It's not the fact that occasionally there's an odour here and there.

"That level of toxicity, in my view, is probably not at a toxic level but it might be at a nuisance level because of the odours."

The plant generally operates from spring to the first snowfall but not on a daily basis.

But that's cold comfort to some of the homeowners who are adamant that the plant be gone by the time they move into their homes. Move in date is expected to be in the fall of 2010.

"I don't want to move there and end up being in a battle for five or 10 years," said Patricia Westerholm, who along with her husband has been struggling over the decision to make their second deposit by the Tuesday, Dec. 8 deadline.

Mayor Ken Melamed announced this week that the municipality will be paying for a third party consultant to assess the various options including engineering, land use and air quality, as staff work to find a new site for Alpine Paving.

He called the June 1 date a target.

"We're doing everything we can to try to work within that," he said.

Meanwhile, Silveri has applied for a rezoning for his neighbouring quarrying company Whistler Aggregates.

He calls the rezoning a "land swap" where he is giving up some of his tenured land close to the Cheakamus Crossing neighbourhood in return for land further away, in an effort to create more of a buffer between his industrial operations and the new homeowners.