Paid parking still having an impact on Whistler neighbourhoods 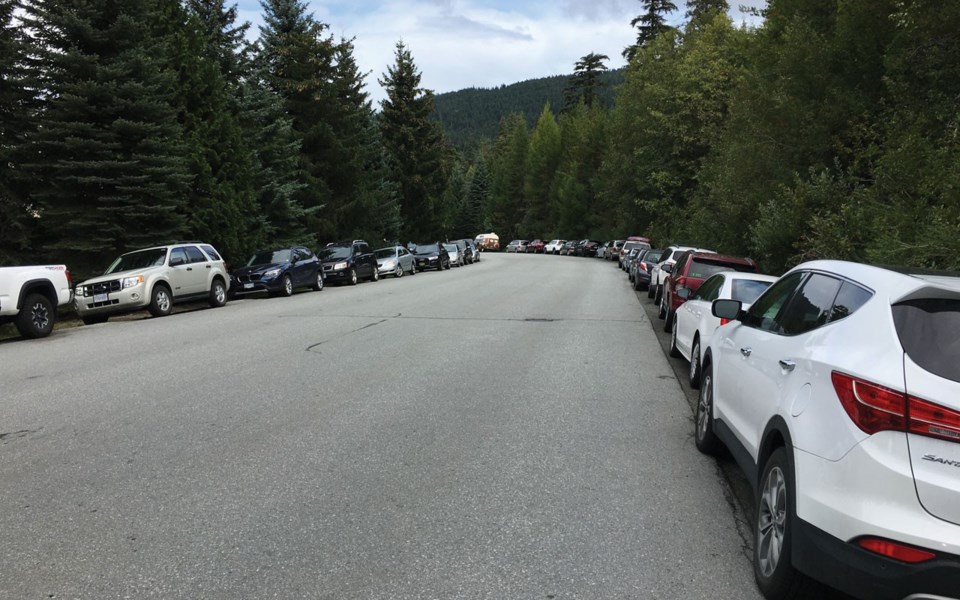 When the Resort Municipality of Whistler (RMOW) re-instituted pay parking in the Day Lots in 2017, it led to some unintended consequences.

And the issue has yet to be resolved.

On Sept. 3, council received a letter from Rob MacKay-Dunn highlighting continued concerns with parking on Painted Cliff Road in the Benchlands.

Parking on the road has been "an absolute mess for a number of summers now, with no signs of getting any better, despite RMOW ticketing," MacKay-Dunn wrote.

"I realized I've been patiently sending photos and calling bylaw services since 2017 with little-to-no positive impact on the situation."

Accompanying MacKay-Dunn's letter were several photos of parking on the street on Aug. 17.

MacKay-Dunn asked the RMOW to consider restricting parking to only the uphill side of the street, opposite the residential driveways, and to actively tow vehicles that are illegally parked.

"Again, another parking issue, this one is affectionately known as Lot 9," said Councillor Cathy Jewett at the Sept. 3 council meeting.

"What is happening in this neighbourhood is because of its proximity to the village. It is getting a lot of traffic parking there, not only because there's no parking allowed at Lost Lake, but because people don't want to pay for parking in the village, so they've inundated this neighbourhood.

"Towing is something that we have to do. There's people in front of fire hydrants, parked nose-in into lawns, blocking visibility, as well as creating a lot of garbage as well, so I hope that we'll work on this."

Soon after receiving the letter, the RMOW limited parking on Painted Cliff to the odd side of the road, said Mayor Jack Crompton.

"They're actively working on addressing the parking challenges that we face there," Crompton said.

"It won't be fixed overnight but I have already seen significant steps in the right direction up there, so I'm encouraged."

In a follow-up email, an RMOW spokesperson said proposed changes for Painted Cliff also include installing No Parking Anytime signs every 40 metres or so.

The RMOW has issued 48 tickets on Painted Cliff this year, along with 1,115 on Blackcomb Way and 248 on Spearhead Drive. Bylaw has also received nine complaints related to illegal parking and camping in the area this year.

In studying the issue of neighbourhood parking last year, the RMOW determined the issue is more related to weather, desired destination and resort business than it is to pay parking.

"People park in neighbourhoods when it is close to where they want to go," the spokesperson said.

"Also, the resort is busier and more occupied than it was pre-Olympics, therefore, more residents/tenants and their guests are parking on neighbourhood streets."

The Transportation Advisory Group will receive an update on summer 2019 parking this fall.

While the search for Whistler's new chief administrative officer (CAO) continues—a posting for the position closed on Aug. 26, and a recruitment team is in the process of reviewing applications—some still have questions about the new role created for current CAO Mike Furey.

On July 25, the RMOW announced that Furey will take on the newly created role of chief of strategic policy and partnerships.

"Where was the transparency? Why did it get released last minute?" asked local resident Dawn Titus, referencing segments of Whistler's Official Community Plan that speak to creating trust, transparency and the community budget.

Though Titus said Furey's new role will cost taxpayers "over half a million dollars," Crompton questioned her math.

The role will begin when the new CAO is in place (likely late 2019, according to the RMOW) and end in early 2021, lasting just over a year.

Furey was the RMOW's top earner last year, with a total remuneration of $246,043. He will carry on in the same terms as his current contract.

"I will say we take staffing very seriously at the municipality, and we don't do that in public," Crompton said.

"Council has over three years left in our term and we have an ambitious set of priorities. While there has been great progress to this point, this position allows us to have a smooth transition to a new CAO as well as get some important work done on some priorities that council has."

But does the new CAO "need someone else to create a transition?" Titus asked.

"I don't believe that was done when our last CAO came on board."

It is a new approach, Crompton said, and the intent of the new position is to "take on some of those strategic priorities that we have in front of us," he said.

In his new role, Furey's areas of focus will include: provincial and First Nations relations; oversight for Resort Municipality Initiative and hotel tax plans and reporting, as well as Resort Collaborative participation and leadership; participation on Whistler's Strategic Planning and Economic Partnership committees; and housing.

A spokesperson for the RMOW said it is unable to say how many people applied for the CAO position, citing its human resources policy.

"Recruitment for executive positions often takes many months to complete. It is too early in the process to confirm when we expect the role to be filled," the spokesperson said in an email.

"The RMOW will update the community once a candidate has been selected and the recruitment process is complete."

The changes include directing more money to the Whistler 2020 Development Corp (WDC) to advance affordable housing in Cheakamus and the Meadow Park Sports Centre for its expansion project; reallocating water infrastructure and sewer capital spending for various projects; and increasing the budget for Valley Trail lighting near the village.

On May 28, council amended the five-year financial plan bylaw to allow a one-time transfer of $200,000 from the housing reserves (representing the bulk of the current housing reserves balance) to the WDC to develop 100 units of employee housing on Parcel A in Cheakamus.

But with WDC indicating it will need "significant additional funding" for the project, the RMOW will commit to the regular, ongoing transfer of its online accommodation provider tax revenue to the WDC until the project is complete (likely at the end of 2021).

The total value is expected to be about $1.3 million.

"It's going to be used for building housing," Crompton said of the additional funds.

"WDC is moving forward [with] the most important housing projects in our community. Council is committed to funding their operations and making sure that we build housing."

The amendment will also move $372,221 to general fund capital expenditures for the Meadow Park project, as well as $68,500 to the same fund for lighting on a stretch of Valley Trail between Village Gate Boulevard and Lorimer Road.

Four water infrastructure projects need bigger budgets for 2019, to the tune of $600,000, while a fifth, the White Gold Water Main Upgrade, is expected to be underspent by the same amount.

As such, the $600,000 will be moved from the White Gold project to the four other projects, resulting in no net change to the overall 2019 water capital budget.

Three sewer infrastructure also need bigger budgets this year, to the tune of $140,000.

That money will be moved from the sewer main project, which was completed under budget in 2019.