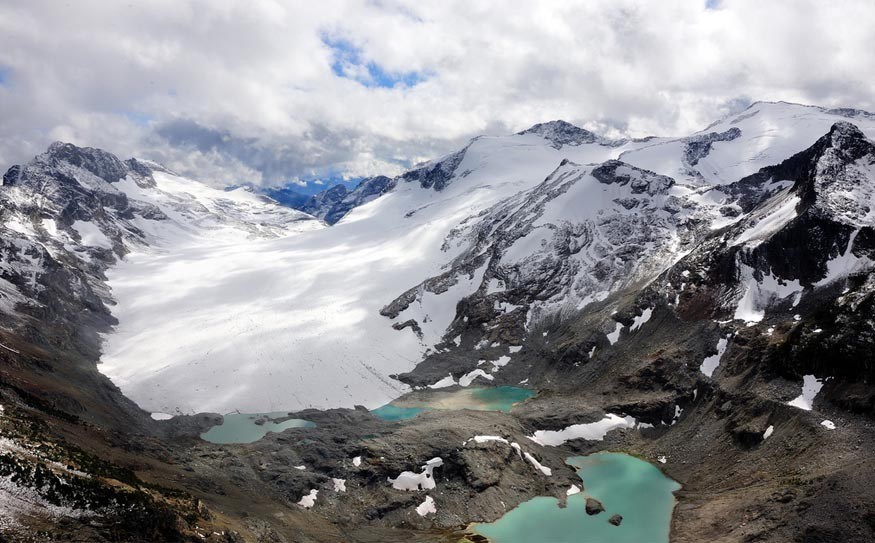 shrinking giants Place Glacier near Pemberton is just one of the many receding glaciers in North America. Photo BY dave steers

The Coast Mountains around Whistler are blanketed in stunning glaciers that 10,000 years ago, at their peak in the last Ice Age, were a kilometre high and slowly winding through the valleys, carving out the slopes that visitors and residents enjoy today.

As silent weather forecasters, glaciers mirror the effects of climate change around the world. They are in retreat, possibly to a degree that has never been experienced before, and this melt off is having environmental and economic impacts that will be felt deeply at resorts and in mountain communities worldwide, including Whistler.

These concerns have led to some seemingly bizarre and desperate attempts at halting and even reversing the trend.

In 2009, Peruvian inventor Eduardo Gold and his non-governmental organization Glaciares Peru received a grant of $200,000 from the World Bank to pursue his dream of recreating the conditions that would allow a new glacier to form near the town of Licapa.

The Chalon Sombrero glacier in the high Andes dried up decades ago, and the town's population has shrunk from thousands to about 900. Thanks to winning the grant — part of the World Bank's competition "100 Ideas to Save the Planet" — Gold said he could whitewash almost 70 hectares (170 acres) on three mountain peaks. Using a concoction of lime, water, sand and soap, local workers trekked up to 4,000 metres and painted the dark rocks found there. The project gained considerable international media coverage.

The project's spokesman, Otto Gold, told CNN in 2010 that Glaciares Peru hoped "to lower the temperature of the rocks from 20 degree Celsius to five," create thousands of jobs if successful and export the concept around the world.

Though not a scientist, Gold's project was described by the World Bank as worth investing in because it "will stop glacial melting and help restore glacial mass — a vital form of freshwater storage in the high Andes and the world."

According to its website, the World Bank saw it as a chance to "decrease microclimate temperatures enough to stop glacial melting and may even allow for the regrowth of glacial mass. The project also will attempt to have the change in albedo (reflectivity) over a 'unit' surface area equated with carbon credits in order to generate a sustainable source of revenue generation for future project applications."

A new source of carbon credits, then, with financial outlay made by carbon-emitting countries that want to buy the credits and creating potential income for the countries that could use Gold's method successfully. Much was at stake. Much remains at stake.

Dr. Gwenn Flowers, an associate professor in Earth Sciences at Simon Fraser University, has been working to establish a research group dedicated to the geophysical study of glaciers, their dynamics and their importance in the global climate system, since 2005.

She is aware of numerous projects like Gold's. In Austria and Switzerland, for example, researchers have tested various fabrics, including sheeps' fleece, that they now use to cover glaciers in the summer to inhibit melt. In Greenland they have tried sheets to stave off the melt. The fabric used has a high albedo and decreases the amount of solar radiation the glacier absorbs. This is being done at ski areas where preservation of glacier ice is important to operations. The fabrics are effective at reducing glacier loss, in some cases by several metres height over the melt season, but are very expensive and would be difficult to deploy over large areas.

Another option could be a thick layer of debris, Flowers said. When thickness exceeds a few centimetres it begins to shield the glacier from radiation and can dramatically reduce melt rates. Snow, with its very high reflectivity compared to ice, is another good natural material that reduces glacier melt. The extent and longevity of the seasonal snowpack on a glacier makes a significant difference to overall glacier melt.

"I have not heard of any glacier-related geo-engineering projects in Canada or the Coast Mountains," Flowers said. "If we were to undertake such a project, we would be challenged by the large areas involved and the remote nature of many of our glaciers."

In Canada, glaciers around the country have also been measured by federal scientists for mass balance since at least 1980. Two on the federal watch list are from the Coast Mountains, Place Glacier near Pemberton and Helm Glacier in Garibaldi Provincial Park. Both have shrunk significantly, according to statistics gathered by Natural Resources Canada and made available through Statistics Canada.  Mass balance is the difference between accumulation and ablation (melting and sublimation), and is measured by what is gained in snowfall in the winter and lost by melt off in the summer.

David Fisher of the Geological Survey of Canada said the wide-ranging methods employed in the attempt at slowing down glacial melt "probably says a lot" about the desperation felt. He is skeptical that painting glacier areas and other methods will have much effect.

Fisher recalled a time 30-40 years ago when the Canadian authorities actually attempted to melt sea ice in order to facilitate shipping and tried to open up mine areas blocked by glacial ice. They dumped soot on them to absorb greater heat.

"I've been doing ice core studies for many years, building up a picture of climate. It's certainly disappearing. The melt rates have been the highest in the last 4,000 years," Fisher said.

"The science is one thing and the emotional response is another. It's pretty sad to see."

Possessing better resources than impoverished Andean villages, ski resorts around the world have been providing among the best work in the study of the impact of climate change on their regions.

Arthur De Jong, mountain planning and environment resource manager for Whistler Blackcomb, said every time he hears of seemingly outlandish projects to preserve glaciers, such as rock painting, he asks scientists on staff what they think.

Whistler Blackcomb guests use two primary glaciers during summer operations, the Horstman (100 acres) and the Blackcomb (100 acres) on Blackcomb Mountain. More than 20 years ago, two glaciers on Whistler Mountain were also big enough to ski or snowboard on, but De Jong said only remnants of these remain.

"Glaciers are very strongly studied by us (Whistler Blackcomb) because glaciers are nature's thermometer, the most sensitive ecosystem. We've known this since the '80s because we worked with scientists when we put T-bars on the Horstman Glacier," he said.

"The glaciers had been retreating for about 100 years."

Whistler Blackcomb brought in glaciologists to study whether dark lift towers negatively impacted the glacier, or if the grooming, including salt placed there in the summer, hurt the glaciers.

"The scientists turned around and said 'don't worry about that, it's all about temperature.' We were somewhat grounded but continued to be concerned in that these glaciers are retreating," De Jong said.

Currently Whistler Blackcomb uses snow fencing at certain strategic locations at the top of the glaciers, and covers smaller vulnerable areas with snow blankets, he said.

"It becomes an economical issue. We have the capacity to cover the entire glacier if that was practical. It would be very impractical. Storms come in. That's why at this point we are using localized application."

And there is some discussion of adding a comprehensive snowmaking system at the top of the glaciers, De Jong said, though nothing has been decided.

"We've worked through the engineering of it, the financial aspect of it and it's doable. We could grow back the glacier if we wanted, we could increase the size. But is it really economically viable? Is it the right thing to do with respect to climate change? It can be energy intensive."

De Jong said he would like to see renewable energy sources, like wind turbines, running snowmaking on the glaciers.

"There's an educational value in what is happening to glaciers. As a four season operation at Whistler Blackcomb we continue to manage the glacier, we need to connect our guests to the dynamics of what the glaciers are telling us," said De Jong.

"There's still people who are skeptics of climate change. Here is an opportunity where we can be a very compelling educator."

Back to Eduardo Gold in the Peruvian Andes. The World Bank grant remains the largest investment in his project he has received to date.

In a second interview with CNN at the end of 2011, Gold said that 15,000 square metres (or 1.5 hectares) had been covered in their whitewash, considerably less than the promised 70 hectares. Heat measurements taken at the time of the interview determined that the white, painted rock was 16 degree Celsius cooler than the unpainted rock.

Gold told the interviewer he believed the area to be too small to make an adequate assessment of the science behind the project. Instead, he told the interviewer, it would be better to cover three billion square metres (300,000 hectares). For this, Gold estimated he would require $1.5 billion over five years.