Parking issues can be lessened by shifting demand, study finds 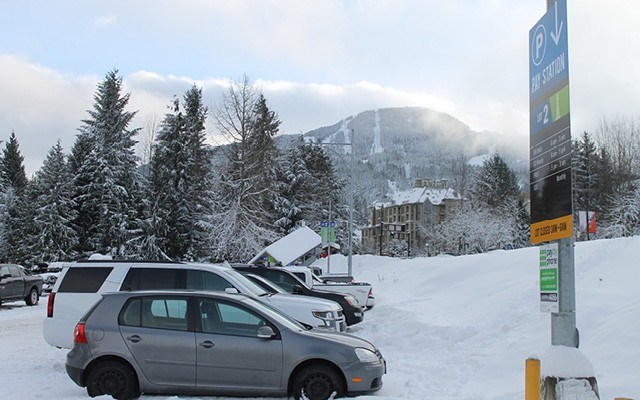 Shift INTO PARK Whistler's parking struggles could be lessened by shifting parking demand to lesser-used areas, a municipal parking study has found. photo by braden dupuis

Parking availability in Whistler Village and the day lots is inadequate, a Resort Municipality of Whistler (RMOW) study has found, but that doesn't mean the municipality needs to put money towards building more.

"There's other lots elsewhere that are sitting half empty or partly empty that we could be making use of, so we don't have to go and build more parking, it's just a matter of making better use of the parking that we have," said community transportation planner Richard Drdul, in a presentation to the Committee of the Whole on Dec. 20.

The parking study — the RMOW's first since 2004 — came out of the Transportation Advisory Group as a means of helping council make fact-based decisions on parking.

The study looked at parking in Whistler Village, Creekside, Day Lots 1 to 5 and Lots 6 to 8 at Base 2, as well as private lots with public access — on both peak and "near-peak" days in winter and summer.

The general rule of thumb in parking is to aim for 85-per-cent occupancy, or 15-per-cent availability, Drdul said.

"Both on a near-peak day and on a peak day (in Whistler Village) we were up over 90 per cent, so we did not have enough availability," he said.

"And in the Day Lots they weren't so bad on those near-peak days, but that one peak day we surveyed the lots were 107-per-cent full... people were jamming their cars wherever they can in the Day Lots."

Private lots, such as Town Plaza or publicly accessible hotels, still had ample availability, with a 57-per-cent average occupancy in the daytime and 77 per cent in the evening.

"They start to fill up in the evening when guests are checking into the hotels, but during the day almost half of those lots are sitting empty, so that's parking that we could be taking advantage of that we're currently not," Drdul said.

The RMOW can make better use of its parking by shifting demand to other, less-used areas.

To do that, the municipality has a variety of options it can pursue.

"We could reduce the time limit in the Village to two hours on Main Street and the Conference Centre... it's four hours now, but 80 to 90 per cent of the people park for two hours or less," Drdul said, noting one especially glaring exception, where one car was parked in the same spot on Main Street on every day surveyed.

"It's like their own private parking spot," he said. "There's 81 parking stalls on Main Street, but there's actually only 80, because this person is using up one of them every day."

This was actually the case in more than one instance, such as people parking all day at the Conference Centre.

"People that are parking overtime are killing our availability, just them alone," Drdul said. "People are taking advantage of those facilities and they're using them as their own private parking spots."

Increasing enforcement would go a long way to freeing up those spots, Drdul noted, which could actually bring the availability back into acceptable levels.

"You don't have to do all of these," Drdul said. "You can do some of these. (It's) best to do them in stages as well, and you would always want to back this up with a solid communications strategy so that you tell people what you're doing and why you're doing it.

"People will accept a lot of this stuff if they understand why you're doing it and that the changes you are making are going to improve availability of parking, and for those who want to park, make it a better experience"

And fixing Whistler's parking and congestion issues will ensure a better experience for everyone.

"If people can find a place to park right away then they're having a positive experience," Drdul said. "Conversely, if they can't find a place to park, if every parking spot is full, then we've got congestion, we have people getting frustrated and starting to behave poorly, and basically that starts detracting from their experience, and we don't want that."

Some residents of the Rainbow subdivision are looking for parking solutions after the RMOW decided it would no longer allow parking on a lot in front of the Solana development.

The lot is owned by the RMOW, and has been identified as a future site for resident-restricted housing, though no plans are in place at the time.

It was previously being used as overflow parking without RMOW approval.

At least three residents of the Solana development have written to council asking for increased parking in the neighbourhood since the change.

"A lot of residents probably do have enough parking for their family or their situation, but there is also a lot of people that don't," said Katrina Strand, one of the letter writers.

"There's not enough parking, and there needs to be a solution."

Leslie McGregor, another letter writer and Solana resident, said that with her job as a mental-health nurse and her husband's back injury, the couple needs two cars.

To get the overflow parking in Lot 10 back would be ideal, but the problem is bigger than that, McGregor said.

"Even if we have those six spots back, if people all have visitors at Christmas, where are they going to park?" she said.

Municipal CAO Mike Furey has invited some of the residents to meet with him in January to talk about the issue.