Claim: Whistler Blackcomb is not delivering on promise to restore downhill run
May 15, 2013 9:00 PM By: Andrew Mitchell 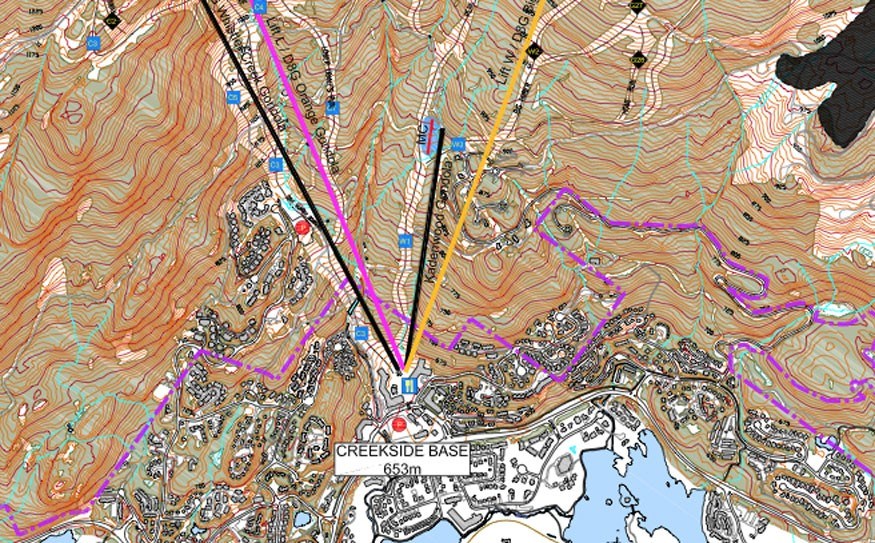 Pique readers may have noticed a flurry of ads in recent weeks, urging people to: "Stop the Paving of the Dave Murray Downhill." Philip Langridge of the Churchill Property Corporation, who funded the ads along with The Ridge at Taluswood Condo Association, said the decision to go the public and start a petition was necessary to prevent an area at the top of Nordic Drive known as the Timing Flats from becoming a parking lot.

"If you look at Whistler Blackcomb's master plan for the next 20 years (from November 2010) and look at Creekside, it shows a maroon 'P' around Creekside and Franz's Trail, and another one on the timing flats," he said. "It wasn't labelled as a proposed project... and a lot of people think that (Whistler Blackcomb) is going to build it."

So far the petition has over 300 signatures. Langridge said he would take the petition to Whistler Blackcomb and the province with the goal of removing the parking area and restoring the Dave Murray Downhill ski run.

Whistler Blackcomb has met owners of the Fairmont At Nature's Door complex, while other property owners in the area have also weighed in on the future of the proposed lot.

The lot was originally created to accommodate the finish area for the alpine events at the 2010 Olympic and Paralympic Winter Games.

While it's not the most readily accessible parking lot in the resort, Langridge suggests that it could be used as an overflow lot on busy days. In fact, he said that Whistler Blackcomb already tried to use it that way in December 2010 and placed signs on the highway until residents complained.

In Whistler Blackcomb's Master Plan, the lot is identified as having a potential 175 parking stalls. The plan filed with the Ministry of Forests, Lands and Natural Resources Operations has this to say: "A small parking lot that has a capacity for approximately 175 cars has been constructured on the area used for the finish facilities. This lot will be available for use in the 2010/2011 ski season and can be accessed from Nordic Drive."

Langridge is concerned that officially designating the site as a parking area, even for overflow purposes, creates a slippery slope for more development in the area.

"If they pave it and open it as a lot then they might have to put in light standards because it gets dark at 3 p.m. in the winter, and they're also going to have to put in toilets for the people driving up from Vancouver to park," said Langridge. "There are all kinds of issues, and if they get their way in the beginning then it could be the thin edge of the wedge — who knows what kinds of uses (the lot) will be put to in the future. Ticket sales? Coffee shop? Things evolve."

Langridge said the current situation has also created an issue for people using the Dave Murray Downhill run, which they were told would be restored after the Games.

"Whistler Blackcomb put in writing in 2008 that it was only temporary, and back in 2009 they said again that it was for temporary use for the Olympics... the idea was strictly to build it for the Olympics, then take it away and put the Dave Murray Downhill back," said Langridge.

The ski run to skier's left of the lot has been narrowed considerably; something Langridge says makes the area more dangerous and less enjoyable to ski. "This is a signature run, one of the best downhill tracks in the world," he said. "And now it's dangerous there, really narrow and accidents have happened. If a snowboarder or skier turns unexpectedly, which sometimes happens, then you're going to have people crashing into each other."