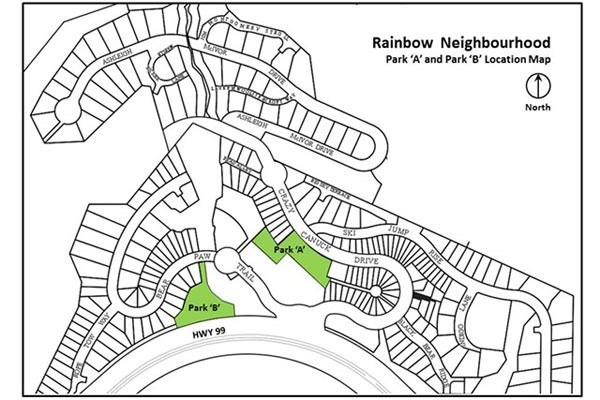 SAD FACE Two new parks in the Rainbow neighbourhood will be named Alpenglow and Boulder. Parky McParkface was a close runner up. Image courtesy of RMOW

When the Resort Municipality of Whistler (RMOW) announced it would be naming two parks in the Rainbow neighbourhood by public submission, there was at least one result that was inevitable: Someone was going to try to name one Parky McParkface.

But with the announcement of the winners on May 23, the dream is over.

The RMOW received more than 130 submissions, which were anonymously reviewed and sorted into a shortlist by the Recreation and Leisure Advisory Committee before council made a final decision on the names.

"A close runner up was... I can't say it. Somebody else say it," Mayor Nancy Wilhelm-Morden said, in making the announcement at the May 23 council meeting.

"Parky McParkface," she eventually said, to laughs all around.

Also at the May 23 meeting, a contract in the amount of $1,492,170.42 was awarded to Kingston Construction Ltd., for the construction of the Emerald Estates Water Disinfection System Upgrades project.

Kingston's bid was the lowest of four.

Though the project received $1,256,512 and $829,298 in grants last March from the federal and provincial governments, respectively, the cost of the project is estimated to be $541,387 higher than what was budgeted for.

As such, an amendment to the 2017-2021 Five Year Financial Plan will be required for the project to move ahead.

With the grants factored in, the total cost to be paid from RMOW reserves will be $955,577.

The project was required by Vancouver Coastal Health (VCH) after all three wells in the Emerald system were determined to be both Groundwater Under Direct Influence of surface water and Groundwater at Risk of Pathogens.

At VCH's request, the RMOW has been maintaining a higher chlorine residual in Emerald over the past two years until the new system can be implemented, and doing rigorous measurements on the distribution system three times a week, with no reports of any infections.

The project will also include a provision for future corrosion control in the system.

"It is highly probably that in the near term there will be a requirement in water systems such as ours to put in corrosion control, just due to the chemical nature of the water," said RMOW utilities manager Michael Day.

"The water on the entire coast of British Columbia, and in fact the entire coast of the continent, tends to be both low in pH and low in minerals like calcium that mitigate corrosion. As a result, essentially water right up and down the coast is what's called aggressive or corrosive."

Day noted Whistler water is safe to drink, but it's important to run the taps until the water is cold before doing so.

"Water that's been sitting in the pipes for a long time can pick up metals from the pipes, and that can leave an unpleasant metallic taste in the water, but also it could be unhealthy, so just make sure that you do that when you're going to drink water," he said.

The 2016-17 drinking water report will be presented to council this summer.