Gondola an extra for most passes, but mandatory for Spirit Passes
Aug 29, 2008 9:38 AM By: Andrew Mitchell 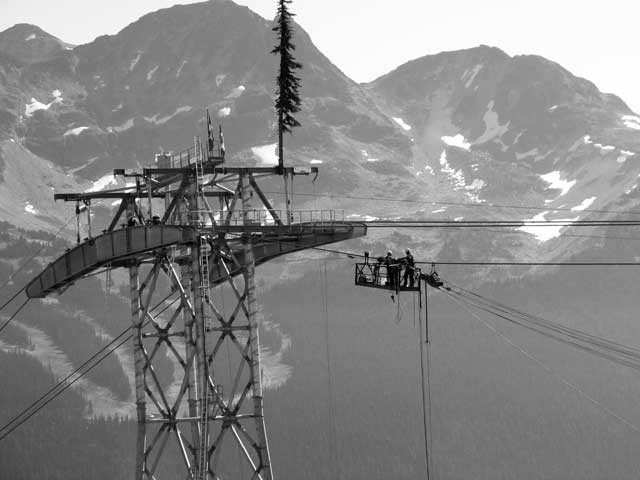 Getting High Crews work hard in August to string cables in anticipation of the arrival of the Peak 2 Peak cabins. Photo by Andrew Mitchell

With snow falling in the upper alpine in the latest storm cycle and the summer tourism season winding down, most Whistlerites are already turning thoughts to winter.

On cue, Whistler-Blackcomb released its season pass prices this week, offering bundled passes with Peak 2 Peak gondola access and setting the price for one day passes to use the new lift.

Stuart Rempel, vice president marketing and sales for Whistler-Blackcomb, said pass price increases were kept low and that the price for a pass that included Peak 2 Peak access is nominal.

“We’re trying to provide the best possible value,” he said. “Certainly we did a lot of research about what people felt the (Peak 2 Peak) experience would be worth and priced it accordingly. The Peak 2 Peak gives people a lot more opportunities for skiing, certainly in the early and late season, and more options on bad weather days as well, which was the whole idea for building it.”

Rempel said that sightseeing is also built into the price, with access to the Peak 2 Peak for almost 200 days during the ski season, and 319 days in total including summer sightseeing.

This year’s pass includes a $125 gift certificate for ski or snowboard lessons, $150 in retail coupons, a 20 per cent discount on food and beverages, and three “bring a friend” tickets that include Peak 2 Peak gondola access, which are valued at more than $240.

At any time during the season pass holders can add Peak 2 Peak access for $89, or purchase a day pass for $7. Also, families purchasing adult and child passes can receive 10 per cent off the total price.

For the roughly 5,000 people who work for Chamber of Commerce businesses that purchase discounted Whistler-Blackcomb Spirit Passes each year, a pass will cost $1,149 this season — a $90 increase over last year — which includes access to the Peak 2 Peak gondola.

Spirit Pass purchasers cannot opt out of the Peak 2 Peak pass, which is optional for most people purchasing tickets and passes.

Rempel explained that it was necessary.

When asked whether it meant Whistler-Blackcomb changed its mind on making the passes optional, Stuart said they were not that specific when it came to Spirit Passes.

“On another note, we really think locals will get the best use out of the Peak 2 Peak. There’s no more discussion of what mountain they want to ski or ride that day, they can do both.”

Whistler-Blackcomb is expecting the gondola to be a big a hit among regular visitors and draw new people to the resort. Most Edge Card holders who renewed their passes for 2008-09 in the spring to receive a bigger discount also purchased Peak 2 Peak access, said Rempel.

“Economically, this is a $52 million investment for the mountain. Obviously there are also required operations costs, labour costs for the people required to operate it, the maintenance of the facility, and the business model we’ve come up with allows us to offer this for a nominal fee,” said Rempel. “At the end of the day it’s an incredible asset for the resort, it’s a world record holder in a few different categories and it will be a major attraction in winter and summer for guests. In enhances the experience, gives visitors more choices, and the access it provides to our guests will take Whistler to another level.

“There is a cost, but we said all along that it would be nominal.”

This year the Peak 2 Peak is scheduled to close for maintenance on Sunday, April 26, the last day of the Telus World Ski and Snowboard Festival. Blackcomb will be kept open, and with no roads this year there will be more terrain available.

On May 16 the Village Gondola and Peak 2 Peak will reopen and allow people to cross over from Whistler to Blackcomb to ski. The Peak 2 Peak will continue to run through the summer sightseeing season, closing on the Thanksgiving weekend in 2009. It should reopen on opening day in November 2009.

Edge Card sales will also get underway next week, offering discounts of $10 to $35 a day for adults. The price of Edge Cards bundled with lift passes will be announced this week.

Day ticket prices are still being set, but Whistler-Blackcomb will be offering discounts up to 20 per cent for people who purchase multi-day lift tickets online.

The Peak 2 Peak Gondola is nearing completion. All four track wires are in place, and the work of splicing the main haul rope got underway this week. The first six of 28 Peak 2 Peak cabins arrived on Tuesday, after being shipped by CWA in Switzerland at the beginning of August. The cabins arrived in Quebec by ship, crossing the Atlantic and travelling up the St. Lawrence River.

Some of the cabins will be used to test the acceleration and deceleration of the cabins in the gondola stations on Whistler and Blackcomb, after which point the load testing and certification of the lift take place through October and November. Evacuation training will also take place before the lift opens to the public in December. More details on the grand opening will be available next week.

The Peak 2 Peak connects the alpine of Whistler and Blackcomb mountains, with stations outside the Roundhouse Lodge and the Rendezvous Lodge. The lift sets several records including the highest vertical point — 415 metres — and the longest free span of 3.024 kilometres between towers. The ride from one station to the other is expected to take 11 minutes, and one cabin will depart every 49 seconds. Each cabin can hold 28 people, 24 sitting and four standing. Two of the cabins will also have observation windows where people can look down while crossing the span.