Pavilion a loss to homeless community

Alan Cowdery chooses his words over tea and cigarettes behind Squamish’s homeless shelter and drop-in centre.
Apr 25, 2008 2:31 AM By: Paul Carlucci 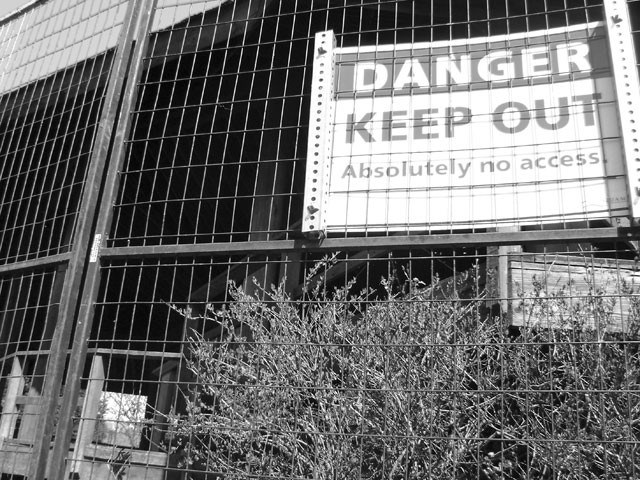 No Shelter: The Squamish Pavilion, deemed a liability by the district, will soon be razed, displacing those homeless who've used its arches for shelter.

Alan Cowdery chooses his words over tea and cigarettes behind Squamish’s homeless shelter and drop-in centre. Wearing glasses and multiple layers, here scowling and there grinning, he details some of his life on district streets, focusing in particular on the Pavilion — which is slated for demolition.

“There’s lots of blankets around,” he says. “There’s lots of things to find and dig up. People throw things away everyday. I’ve slept there with snow drifting in on top of me, and I was perfectly warm.”

Meanwhile, district staff has deemed the Pavilion unsafe and unsound. Fences have been erected, barring the public from access.

According to a report received by council, the structure ails from rotting columns, missing shingles, exposed electrical and a laundry list of other problems. Prescott worried over liabilities that could come about in 2010, when an influx of tourists might place further strain on the structure. If repaired, staff say the district would have to pump $600,000 into the project, mainly to correct the deviated columns. The price of demolition is just shy of $6,000.

“They’re full of shit,” Cowdery sneers. “I’d say it’s a gross error that the Pavilion should be dismantled. It was built stable and solid. I’m sure it would cost more to tear it down than to make the changes.”

Designed by Peter Legere, the Pavilion was built to celebrate Expo 86. Since then, it’s been a favourite venue of the downtown business community, who have used it for summer celebrations. Wedding parties occasionally congregate under its arches, and residents sometimes enjoy the shade it offers.

While its appeal to skateboarders has ruffled council feathers, the role it plays in the lives of people like Cowdery has proven most controversial. Quoted in local media, Greg Fischer, head of the downtown BIA, said homeless people “abuse” the Pavilion as a shelter.

Cowdery doesn’t care for that wording.

“And there’s been some things reported in the local press that are ludicrous,” he says. “I.e., homeless people that have been burrowing down into the structure to get away from the cold. I don’t know if these people have been putting together too many model airplanes recently.”

A recent social drama saw Cowdery leave his bed and library at the Pavilion for other arrangements. Still, he figures a dozen or so people will be out of a roof when the structure comes down.

During a recent shirtsleeve session, Councillor Patricia Heintzman suggested that council give some thought to the people displaced by the destruction of the Pavilion.

“Do we, in the long term, want to see if we can find funding for a shelter, like a proper shelter with beds?” she asked. “Do we want to provide a lean-to, toilets? There are all kinds of issues — bears, feces in the woods.”

Council deferred any decision to the district’s Social Planning Council, which is brainstorming solutions to the town’s homeless problem.