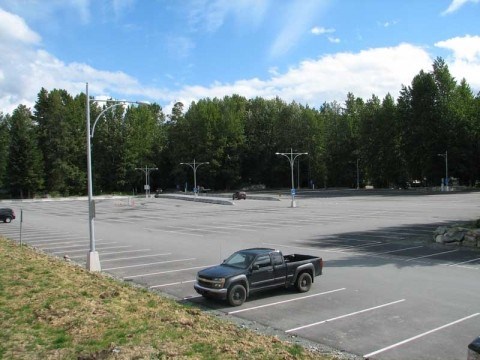 Lots 1 to 3 were practically empty on Monday and Tuesday of this week as the municipality's latest pay parking plans came into effect on June 28.

By contrast, the still free Lot 4 was nearly full just before 10 a.m. on Tuesday, and in the afternoon there were cars circling and waiting for free spaces.

While the decision to bring pay parking to three of the five day skier lots was controversial to say the least, the municipality is sticking to its guns. Among the reasons given for the change are the environmental benefits of encouraging people to use public transportation, offsetting the cost of maintaining parking stalls, raising funds to increase transit service, covering the cost of the new debris barrier on Fitzsimmons Creek and repaving the lots themselves.

However, the municipality is under no illusions that pay parking will be a popular decision, at least in the beginning.

When asked why the municipality brought in pay parking before the busy July 1 Canada Day and July 4 Independence Day long weekend, Bob MacPherson, the general manager of community life, said there was "no good time for a municipality" to implement a new fee "like pay parking." However, he said visitors from the city will be accustomed to paying for parking and won't be "sensitive" to the amount.

The Whistler Chamber of Commerce acknowledged that local businesses are concerned that pay parking might impact traffic to the resort and to the village, but currently the chamber has no official position.

"Anecdotally, we understand that some of our members are concerned about the introduction of pay parking at this time," wrote chamber president Fiona Famulak in response to a request for comment from Pique . "We will continue to connect with our members to better understand if/how pay parking impacts their business over the coming weeks."

Recently the chamber announced a new post-Games strategy that includes creating a process that would allow the organization to quickly canvass its membership in order to take a stand on issues in the future and play an advocacy role. The pay parking issue could be one of the chamber's tests of this process.

But while pay parking may have its critics, the RMOW has made an effort to implement a system that is as simple and stress-free as possible. The municipality held a media event on June 24 to showcase the new bylaw vehicle equipped with infrared cameras and character recognition technology that scans licence plates. The 20 new pay kiosks located around the parking lots were also demonstrated. The system doesn't require you to drive through a kiosk or go back to your vehicle to place a ticket on your dashboard - all you have to do is input your licence plate number, which will be uploaded wirelessly to a database. That information is compared to a list of plates compiled by the cameras, with tolerances built-in to ensure that you don't get a ticket while you're on your way to a kiosk.

The one drawback is that the system is not compatible with the SmartPark in-car parking meters already offered by the municipality for parking areas in the village.

The municipality is also looking at offering monthly parking passes in the future, pay-by-phone modules and highway signage to indicate availability in the day lots.

The RMOW is also planning to announce increases to transit services to go along with pay parking after Labour Day. In the interim service has been increased to both Spring Creek and the new Cheakamus Crossing neighbourhood.

Emma DalSanto, traffic demand management coordinator for the RMOW, said they were aware of issues - such as the lack of a southbound highway stops at Spring Creek - and have brought the issue up with the Ministry of Transportation.

As well, tour and long-range buses can still use Lots 4 and 5, but if the lack of space is an issue the RMOW will consider moving those buses to Lots 6 through 8 in the future, and providing transportation back to the village for drivers.

Sandra Smith, manager of the bylaw department, pointed out that one advantage of pay parking is that a lot more spots will be available for visitors and people with errands in the village.

Judging by all the empty stalls on Monday and Tuesday, that seems about right.