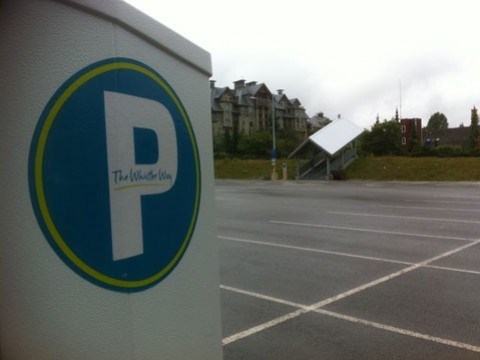 In an avalanche of community feedback, more than 800 people have spoken their minds on pay parking in just a few short days.

And it's not too late to add your two-cents-worth.

Last Thursday the municipality launched an online survey for feedback from residents, business owners, employees and visitors to gauge the appetite for pay parking in day lots 1-5. The majority of respondents were Whistler employees or residents, many of whom took the time to fill out the comment section at the end of the survey. The survey is the only official mechanism to register individual comments on the issue. And the sheer volume of the response is a sign of just how passionate the community is about paying for parking.

At the same time as the online community rallied to have their voices heard, 350 people were surveyed in the day lots over the weekend. Those were primarily guests to the resort.

"I'm delighted to see that we have changed our thinking to looking at our customer," said Councillor Ted Milner, at Tuesday's stakeholder workshop meeting.

Milner was instrumental in demanding a second look at the proposed pay parking strategy that was to be implemented in June, but delayed due to council concerns about the community backlash.

The recent surveys and stakeholder workshops will now form the basis of another pay parking strategy.

What has quickly become apparent is that Whistler does not have a solid year of baseline data under its belt to gauge the impact of the parking lots.

That's because there has always been a free lot option.

The free lots, said consultant David Hill of MMM Group, cannibalized demand from the pay lots. That will keep happening until all daily and hourly fees are brought to the same base line.

The municipality's interim CAO, Bob MacPherson, said at the workshop: "Our sense is that free is probably not on the table as a realistic option moving forward."

At that workshop several ideas were floated, from ensuring that there are monitoring systems in place to gauge the impact of pay parking, to making parking passes work on the buses, to selling frequent user or employee passes for residents or second homeowners.

Another issue raised was the use of the day lots during events like this week's Crankworx mountain biking festival where sponsors are using the parking lots as an expo with the tents. In September the GranFondo will take over Lot 4 as a hub for its road riders.

"There's a lot of animation in the parking lot right now," said Councillor Eckhard Zeidler, who asked if the municipality was charging the businesses like Jeep and Giant who have tents set up in Lot 3 for Crankworx.

MacPherson said: "To date we haven't gone and sought revenue."

When contacted about the activation in the day lots and who reaps the rewards of it, Crankworx spokesperson Michelle Leroux said that there has long been an agreement in place to allow Crankworx, which is owned by Whistler Blackcomb, to use the day lots for activation.

"Crankworx is a zero profit enterprise," she added. "The event never makes money. We usually lose money on Crankworx."

The idea, she added, is to work with resort partners to drive business to the resort and make guests aware of Whistler's summer offerings. Crankworx is generally the largest and busiest week in the summer calendar.

In the meantime, as the lots fill and look alive with Crankworx activity, new signage and way finding will be installed within the month.

It will be colour-coded and complement the existing signage in the resort.

Consultant David Hill will be producing a final report and municipal staff will be taking that to council for endorsement of a direction.

While no specific rate was discussed at the meeting, Hill presented numbers that included setting a $2 hourly rate at all the lots with a $5, $8 and combination $8/$12 daily rate.

The short online survey will be operational for another week, until Wednesday, July 27.

One question asks: Parking spaces in the day skier lots cost about $3,000 to build, and $1,000 per space per year to maintain. Typically, public parking is paid for by local business levies or rented to business owners (as at a shopping mall) or by those who use the lot space by the day or hour (as at parking meters). Who do you think should pay for the parking lot construction, operation and upkeep?

The choices are: a) All taxpayers equally, regardless of how often they use parking

c) Only those who use the parking space, on a pay-as-you-go basis

Another question asks: Is it appropriate for the municipality to charge a "market rate" which may include revenue net of expenses (profit amount), in order to keep taxes down?

The choices are: a) Yes

Council is expected to make a decision on the parking strategy in September.