Record-breaking lift between Whistler and Blackcomb draws thousands
Dec 19, 2008 6:37 AM By: Clare Ogilvie 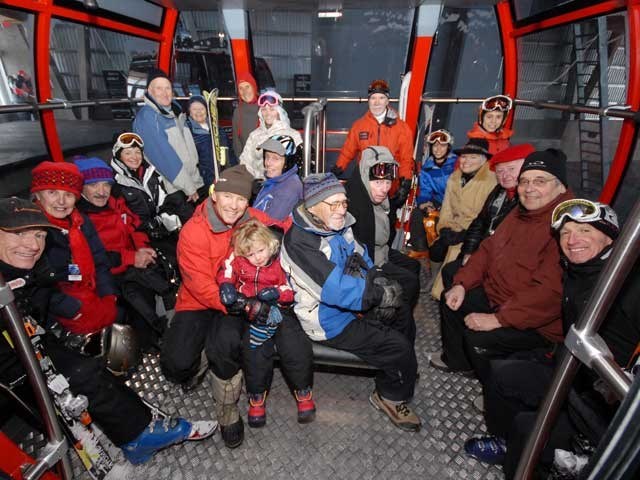 Over half of the riders and skiers on Whistler Blackcomb last weekend rode on the just opened Peak 2 Peak gondola.

“The first weekend was great. People rode it, loved it, and we had lots of great feedback.”

Not even the gusting winds of up to 60 km/h on Saturday could keep the sky cabins in their barn.

“…There was no problem… it was smooth,” said Brownlie.

The opening event on Friday, Dec.12 was web cast and over 13,000 user sessions were logged for the event.

“…And there were big groups watching too, like the groups at Myrtle Philip School,” said Brownlie.

“All the feedback on the web cast was really positive.

“It was a great day for everybody that came out and it was really a celebration of Whistler and Whistler Blackcomb.

“People have said: ‘Oh, it is a tough time for you guys to be doing this.’ But actually it is a great time. We are coming out with a great new lift and attraction, something to talk about, and it will definitely bring more people here.”

Stories about the Peak 2 Peak appeared in dozens of overseas print media and on international television as it captured the excitement and awe of mountain lovers.

It was no different right here at home.

“You know it really was amazing,” said 90-year-old George Huxtable, one of the 22 contest winners who got to ride in the very first gondola from Blackcomb to Whistler.

“I thought I died about eight times,” he said.

“I enjoyed it. I enjoy everything. That is why I am still skiing at 90.”

Said son Gordon: “It was very fun. It was smooth, it has a great view and it was very high up but it didn’t fall off. It was spectacular. I think it is a great part of our diversification.

Asked if he would ski both hills he replied: “In a heartbeat.”

For Whistler dentist James McKenzie and wife Janis, the 11-minute ride from Blackcomb to Whistler on one of the glass-bottom gondola cabins gave them just enough time to renew their wedding vows.

“We wanted to renew our vows, and it was wonderful,” said James McKenzie.

Said wife Janis: “It was unbelievable. We got married up on Whistler 11 years ago and this just all fell into place, and we did it in 11 minutes.”

Paralympian and coach of the B.C. Disabled Ski Team, Phil Chew, was also in the first gondola.

“It was smooth,” he said. “You didn’t even feel going over the towers, and even though it wasn’t the clearest day you could see 1,400 feet down to the bottom of the valley to Fitz Creek.”

“I think it will be great for skiing. At the beginning I didn’t know what to think of it, but now I can see the potential. I can see that it is really going to make a big difference.”

Even Dan Doyle, the head of venue construction for the Vancouver Organizing Committee for the 2010 Games, came to Whistler to take a ride.

“It was phenomenal,” he said.

“What a great thing to bring to Whistler. I wanted to come to see it because I am an engineer, and this is a phenomenal feat. Look at the towers, look at the cables, and the cars. It is fantastic.

“We think the Games are going to show the world what Whistler Blackcomb is all about, and now we will be able to show them this as well. It will be great.”

Whistler Blackcomb’s Brownlie could hardly contain his excitement in announcing the opening Friday.

With an ear-splitting smile he told the huge crowd that when he first heard of the idea from Hugh Smythe he just smiled and went back to work.

But once the 2010 Games were awarded and Whistler Blackcomb consistently drew over two million skier visits, they knew they had to look to the future.

“At Whistler Blackcomb we have always dreamed big, and we have always been bold, and the Peak 2 Peak is all about that,” he said to an appreciative crowd.

“Building on the top of two mountains after two big snow years in what can only be described as an overheated building environment, to deliver this project on time and on budget has been a huge, huge accomplishment.

“The Peak 2 Peak gondola is about inspiration, and it is about dreams. It will take our guest experience to an entirely new level, and it will inspire people to come from around the world and enjoy our playground.”

Premier Gordon Campbell was supposed to be on-hand to help open the Doppelmayr 3S gondola, but a snowstorm kept him in Vancouver.

Said Gary Lunn, federal Minister of State for Sport, who was in Whistler for the opening: “Last night we talked to the weather gods, and we said do we want snow or do we want the Premier today, and we got snow. You can never have too much snow. We love the Premier but we love snow.

“There is no question that this ski resort is the best in the world, and the new Peak 2 Peak is such an impressive marvel of technology.”

B.C.’s minister of transportation, Kevin Falcon, was also on hand for the event, telling an audience of hundreds that the gondola will help put B.C. on the map around the world.

“The Peak 2 Peak is going to be an iconic symbol of a world class resort,” he said.

The Peak 2 Peak runs everyday and is included in most lift tickets.