A pedestrian was killed on Highway 99 late Saturday evening.
Aug 3, 2007 9:53 AM By: Pique Newsmagazine Staff 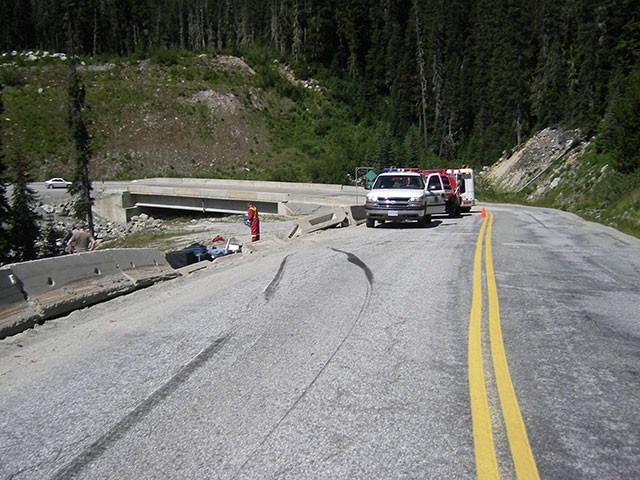 A Resort Cabs taxi struck 21-year-old Cameron Harrison of Nanaimo as he walked near Blueberry Estates.

Harrison was transported to Lions Gate Hospital in North Vancouver, where he died from his injuries a short time later.

Police say alcohol and speed are not believed to be factors in the collision, and are assisting the coroner’s office with an investigation.

Sea to Sky Regional Police Services had a busy weekend, with 111 calls for service, including 12 calls for Causing a Disturbance, eight noise complaints and 16 counts of people drunk in public. There were also 10 impaired driving charges laid, eight collisions and one driving complaint. Three mischief complaints, one break and enter and 10 thefts were reported.

Among the weekend’s “highlights”:

• A “liquor fed” daytime party in the Mount Currie area ended with multiple arrests, after police received calls that there were almost 50 people causing a disturbance while under the influence.

“It was kind of ongoing from late morning to the early afternoon, so we made a couple of trips up there and then finally things came to a head where we had to make numerous arrests just to defuse the situation,” said Cpl. Paul Vadik.

The 17-year-old was prohibited from driving by the Superintendent of Motor Vehicles. He is scheduled to make his first court appearance on Sept. 20.

“I’m extremely disappointed with the amount of incidents involving alcohol and driving,” said Cpl. Vadik. “Its not like the message isn’t delivered on a regular basis: don’t drink and drive, say no to drugs, wear your seatbelt, speed kills. Yet, people still are defiant.”

At around 8:30 p.m. Saturday, police were called to the scene of an accident on Pemberton Meadows Road. A vehicle had failed to turn a corner, narrowly missing a fire hydrant and rolling over.

She was released after providing breath samples and is scheduled to face charges of impaired driving and driving over .08 in Pemberton Provincial Court on Sept. 9.

Sunday morning, police encountered another impaired driver who was operating a tractor on Highway 99 near Clover Road.

A passenger in a pickup truck narrowly escaped injury after the tractor turned into the truck, which was attempting to pass. The tractor’s hay forks were embedded into the side of the truck, causing significant damage.

Cpl. Vadik said the tractor driver was found to be under the influence with an amount below the legal limit, but was still issued a 24-hour driving suspension.

• A vehicle crashed through the front window of the Pemberton Veterinary Clinic next to the liquor store.

The elderly female driver had accidentally pressed the gas pedal instead of the brake, and accelerated into the building.

No one was injured, as the clinic was closed at the time of the accident.

• RCMP were called to a residence early Saturday morning to check out reports a man was spotted lurking in the area.

A suspect was recognized from an ongoing criminal harassment case and chased by police.

After tracking for two hours with a police dog, the suspect’s trail was lost. RCMP have now issued a warrant for the arrest of 37-year-old Mark Connolly.

• Pemberton RCMP say two men are lucky to be alive after a serious accident on the Duffey Lake Road near Cayoosh Creek Bridge Monday morning.

Police say a large cube van was traveling southbound when the driver lost control of the vehicle after rounding a sharp turn.

The van began to skid, went up onto two wheels before crossing over into the incoming lane, crashed through three cement barriers and plummeted 100 feet down a steep embankment, rolling once.

Officers were “amazed” to discover both men unharmed, and attributed their safety to their use of seatbelts.

Music and sound equipment from the van was scattered across the area, and emergency crews spent four hours cleaning the scene.

The driver, from Ontario, is now facing charges of driving without due care and attention.