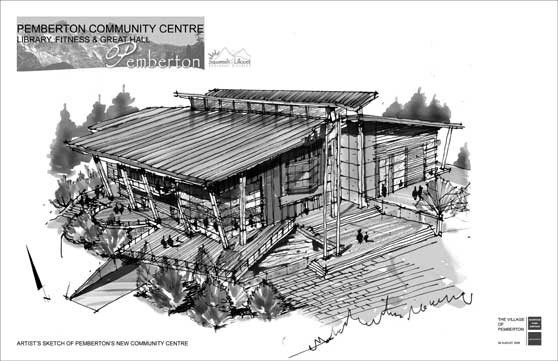 Two-storey building will house a new library, in addition to a variety of multi-purpose rooms - illustration submitted

About 50 people gathered to witness the official kickoff to the construction of the Pemberton and District Community Centre on Aug. 28. In their addresses to the audience, both Village of Pemberton Mayor Jordan Sturdy and Electoral Area C Director Susie Gimse expressed delight that the project had come to fruition.

"This will be a great thing for our communities," said Gimse.

Sturdy remarked that the project had been a long time in the making and could not have been accomplished without the unwavering dedication of many people.

The community has been exploring various concepts for a community centre since 1975, and for the past decade the former high school has served that function. However, the fate of the decommissioned building is dependent on the will of the Howe Sound School District, the body that owns the property.

The new 22,000 sq. ft., two-storey building will house a new library, in addition to a variety of multi-purpose rooms, a fitness centre and after school care facility. The facility is budgeted at $6.7 million with a 15 per cent contingency in place.

The Vancouver architecture firm of Davidson Yuen Simpson was retained to create the design, with Dane Jansen taking the lead on the plan.

"The new Pemberton Community Centre creates the potential for interaction amongst people as they move through the space," said Jansen.

The next step will be putting the foundations in, with the superstructure of the building being put in place from November 2006 to June 2007. The grand opening is scheduled for Sept. 2007.