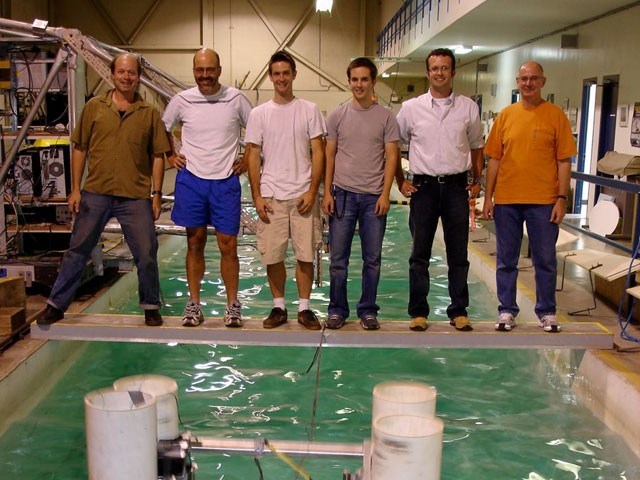 While Pemberton definitely isn’t a seaside community, one resident is very invested in the ocean.

Nigel Protter, who has lived in the Whistler and Pemberton area for almost 30 years, is now president and CEO of SyncWave Energy Inc., an ocean wave technology company. Protter founded the company four years ago, after realizing that oil and gas resources can’t realistically be replaced with wind, hydro and solar energy sources alone.

“We’ve got two big problems: climate change and energy security… and we can’t solve it with terrestrial energy sources,” said Protter. “…So I started thinking about ocean energy.”

The company recently developed a unique device, called the SyncWave Power Resonator, which captures ocean energy. While the idea of harnessing ocean energy isn’t new, it hasn’t been a commercially viable energy source because of flaws with some devices developed in the past.

SyncWave’s device is unique because it taps the domain frequency of ocean swells, generating power on both the up and down movement, and absorbs energy from relative motion, meaning the device isn’t fixed to the ocean floor, which results in fewer repairs.

The device’s minimal undersea infrastructure also leads to lower installation and service costs, and fewer impacts to the marine environment.

“Our technology is considered the best, the most promising wave energy technology in the world right now by a lot of people,” said Protter.

“We did a much deeper search of the global patent history in wave energy. We looked at all the competing companies and ideas out there, and this went on for several months, and finally about two and a half years ago, the concept we call SyncWave Power Resonator fell out of that analysis,” said Protter.

Protter teamed up with Dr. Bradley Buckham of the University of Victoria, and signed up for a provincially funded graduate research internship program called ACCELERATE BC, which connects promising research talent with local companies for short-term projects.

The program evolved out of another research network known as MITACS. It was expanded in February and infused with $10 million from the Ministry of Advanced Education. Over the next four years, ACCELERATE BC will fund 650 internships.

Scott Beatty is one of more than 100 students participating in the ACCELERATE program this year, and has helped design, build and improve SyncWave’s resonator.

Beatty, who is currently completing his Masters of Engineering at UVIC, explained how the technology works:

“You have two floating bodies on the surface of the ocean — they’re really large bodies — and our concept is that if you shape those… bodies properly, you set their masses properly, they’re going to move opposite to each other,” Beatty explained.

“So what we’re doing is harnessing that relative motion.”

They plan to put resonators in remote communities that currently burn diesel — which is considered to be a “dirty fuel” — to generate “clean” electricity. SyncWave recently received a clean energy technology award, because their technology doesn’t produce greenhouse gases or create noise pollution.

Protter says Beatty’s work through the ACCELERATE program has been extremely valuable to SyncWave.

“There are many programs I can name that we’ve done… that are incredibly onerous and you really wonder at the end of it all if it was even worth it. This is a program that is definitely worth it.”

Beatty is halfway through his second internship with SyncWave, and will finish his Masters project this summer. He then has to decide whether he wants to stay on with SyncWave or go on to do his PhD. Either way, his experience with the company has helped him to determine his career path.

“My job is exciting and pretty fun… so I’ve gained, essentially, an occupation that I really enjoy that I feel excited about and feel passionate about. Renewable energy technology is something really, really important.”

Now that SyncWave has designed its device, the company needs to take the next step.

“That experience resides pretty much exclusively with the people that do the engineering for the offshore oil and gas industry… these are the people that design and engineer the submersibles, the platforms, the pipelines, the tabling, the moorings, that last, and it’s a very specialized and amazing technology.”

So SyncWave recently entered into a new joint venture called SyncWave Systems, with Marinus Power, a group of offshore oil and gas experts. SyncWave will license its technologies to Marinus, and provide engineering support, ocean test permits and customer and utility relationships in exchange for Marinus’s expertise in offshore construction, ocean engineering and project management.

The companies plan to work together to secure funding to build a first-generation demonstration device that will be deployed and tested off the west coast of Vancouver Island in late 2009 or early 2010.

While SyncWave has received positive reinforcement from different levels of government, Protter says they haven’t offered any tangible financial support, so they’ve had to go outside of the country for venture capital funding.

“We’ve had a lot of trouble getting financial support from the federal and provincial governments… we’ve had these little programs like MITACS and ACCELERATE BC, which are great stepping stones, but they don’t get us to where we need to go.”

But he remains optimistic about the future of the industry.

“Whether it’s SyncWave or some other company, I can assure you that ocean energy is going to make a significant contribution to global energy well within the next 20 years.”