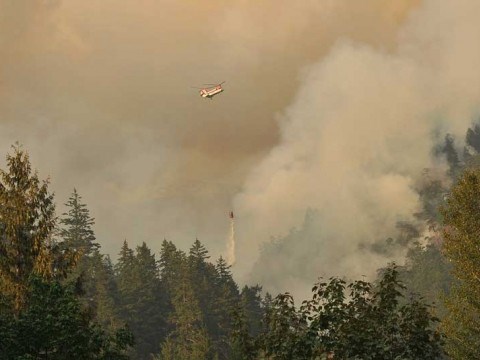 An evacuation alert for the Upper Pemberton Meadows remains in effect as the Copper Mountain and Camel's Back East fires continue to grow.

As of Wednesday, the Camel's Back fire is 440 hectares, up from 250 hectares Saturday. The Copper Mountain fire was estimated to be 750 hectares in size Wednesday, up from 325 hectares on Saturday.

Roxy Kuurne, the owner of Kuurne Farms at the end of the paved road in the Meadows, finds her property caught in the shadow of both fires. The farm, which grows potatoes and raises cattle, is nestled at the base of the Camel's Back.

Out one window she can see the Camel's Back fire and out the other the raging blaze on Copper Mountain.

"We've moved a few cattle because they were in the fields right next to the fire," she said from her home, where she and her husband remain under evacuation alert. "Right now the fire's burning on the mountainside and it hasn't come out on to the valley floor since Thursday. There was one fire on the valley floor which (fire crews) put out.

"If it comes on the valley floor, depending on where, we would be in trouble then, but at the moment it seems to be burning along the hillside and up the hillside."

The Coastal Fire Centre has warned that a "substantial" amount of smoke is in the area and that residents may experience continued ash fallout from the fire.

John van Loon, the owner of a farm on Hurley Road, worries that falling embers could ignite bales of hay he has stacked on his property.

"I have a big water cannon ready to sprinkle water on 550 bales of hay, round bales, the big, big ones, just in case ash should land on there and they could catch fire," he said.

Four air tankers, 20 helicopters and 170 firefighters are battling wildfires in the Pemberton Zone Operation Centre as of Wednsday. Those resources are being allocated to fires on a priority basis. The largest fires in the zone are the Copper Mountain and Camel's Back blazes.

Fire crews have built fire breaks to try and contain the two fires. Fire burn offs, to reduce fuel load, are being considered but haven't yet been implemented, said Mike McCulley of the Coastal Fire Centre.

Another community meeting regarding the fires in the Upper Pemberton Meadows was scheduled for 7 p.m. on August 5 at the Meadows Community Centre.

Meanwhile the Mount McLean fire west of Lillooet forced the evacuation of the town's 2,000 residents Sunday evening. The blaze, which had grown to 3,333 hectares by Wednesday, was within 1 km of the town.

Fire crews lit a series of controlled fires throughout the Lillooet area Tuesday in an effort to remove all fuel between the blaze and the town. The effort was described as a success, although the blaze was still uncontained Wednesday.