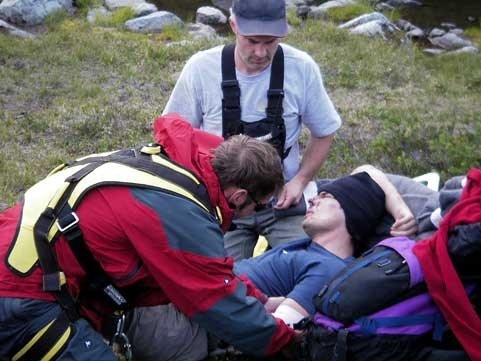 An Austrian climber is in good condition and lucky to be alive after a fall and dramatic rescue in the Joffre Lakes area on Sunday.

The accident occurred at approximately 10:30 a.m., as a group of experienced German and Austrian climbers made their way to the peak up a steep snowfield. They were at about 8,000 feet of elevation when one climber’s crampon blew off, sending him sliding down the snowfield into the rock and rubble at the bottom. When he finally came to a stop, arm broken and body cut and bruised, he was just one metre from the edge of a 300-metre drop.

“Mostly he was an extremely lucky guy,” said Pemberton Search and Rescue director Dave Steers. “He broke his arm in a number of places, there were some scrapes and contusions, but that was about it. That cliff was close.”

Pemberton SAR members performed the rescue alongside members of Whistler SAR, with 10 volunteers.

The injured climber couldn’t move, so a member of the climbing party headed down to find cell phone coverage. That meant descending the Joffre Lakes trail to the parking lot and driving to Mt. Currie. Search and Rescue was paged at 4:18 p.m.

“He was way up there, and did an incredible job getting down (to Mt. Currie) that fast,” said Steers. “We usually get the call at 8:30 at night when there’s no light left to fly, so it was good to have a few hours to work with.”

A SAR team member was lowered to the area, where he packaged the injured man so he could be lifted down by long line. Shortly afterwards he was brought down to the Cerise Creek cabin area, where he was loaded into the Pemberton Helicopters machine and transported to the Whistler Health Care Centre for treatment at approximately 8:30 p.m.

“It was a big mountain rescue and everything went well,” said Steers. “There was potential there for bad things to happen I suppose, but the two (SAR) teams worked really well together. It was a remarkably smooth rescue, given where he was located.

“It was beautiful that the friend managed to make it down early enough to give us a window of daylight to work with.”

Steers says the party was well-prepared and going by the book when the crampon failed. The only thing that might have sped up the rescue was the use of a satellite phone, he said, but otherwise the group responded to the emergency the best way possible.